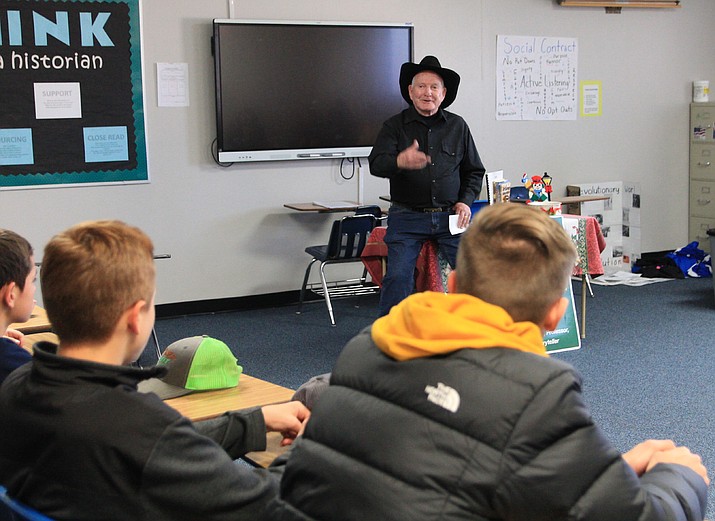 Born in 1939, Trimble has been called the “Will Rogers of Arizona.”

Known for his wit, humor and storytelling abilities, Trimble entertained Ash Fork students Dec. 15 with tales of wild camels in Arizona, growing up on Route 66 and baseball tournaments between Ash Fork and Seligman.

Though he currently lives in the Phoenix area, Trimble spent much of his formative years living in Ash Fork and has fond memories of Williams.

“I grew up along Route 66 before they made a big deal out of it,” he said. “That was the main highway — it ran right through the middle of Ash Fork when I was growing up.”

Trimble moved to Ash Fork when he was 8 years old and lived there until he was 16. His father was employed in Ash Fork with the Santa Fe Railroad, he said

“When I was going to school here we didn’t get any history of Arizona and when I went to ASU they didn’t have an Arizona history class. It was about 10 years later when they finally offered one and I took it,” he said.

In 1997, Trimble was appointed as the official historian for the state of Arizona by the governor.

He is one of the state's most popular speakers and performers and also serves as an educator, lecturer, folk singer and stage performer. He appears frequently on radio and television as a goodwill ambassador for the state.

Trimble also answers questions about the Old West from readers around the world in True West Magazine’s popular column, “Ask the Marshall.”

Additionally, he is considered the “dean of Arizona historians” and taught Arizona history at Scottsdale Community College for 40 years before retiring in 2014.

In 2016 he was appointed by Governor Doug Ducey to the Board of Directors for the Arizona Historical Society. He served one term as president, 2015-2016.

Trimble has served more than 25 years as a founding member of the Arizona Peace Officer Memorial Board honoring officers who died in the line of duty.

He is a special deputy with the Maricopa County Sheriff’s Office with the rank of captain. He is also an honorary deputy sheriff in Cochise County and he is an honorary major in the Arizona National Guard.

Trimble frequently travels around the state as one of Arizona’s most popular speakers.