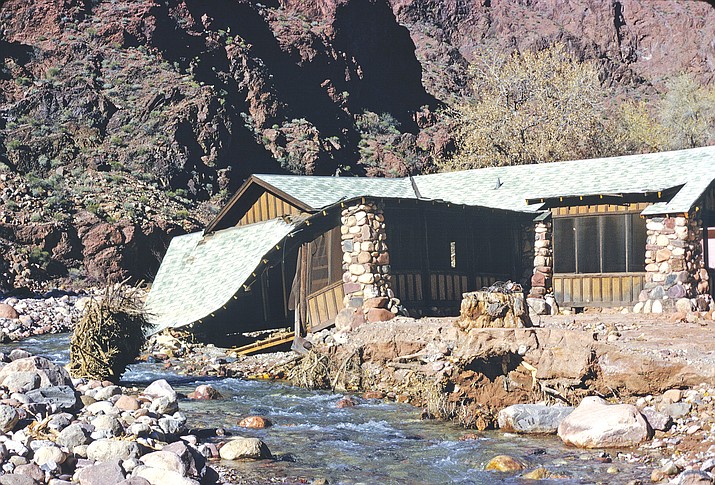 Phantom Ranch was heavily damaged in the 1966 flood. (Photo/NPS)

Editor's Note:Geologist, writer and river guide Wayne Ranney shares the following story he wrote in 2016 on the 50th anniversary of the 1966 Grand Canyon flood. This month marks 55 years since the flood roared through the Canyon.

Anniversaries are something I tend to notice and I’m so glad I did not let this one slip by unnoticed. It was fifty years ago this week that a four-day storm moved through the greater Southwest leaving between 11 and 14 inches of rain in about a 76-hour period. The intense rainfall produced what the United States Geological Survey called a 1,000 year flood.

The flood is an integral part of the lore and history of river running in Grand Canyon since it created one of the top three rapids on the river (Crystal Creek) and destroyed the Transcanyon Pipeline just months before its completion.

December 3-7, 2016 will mark 50 years since a giant flood roared down Crystal Creek (and many others) in the Grand Canyon. Nothing like it has been observed ever since, and as we mark this historic anniversary, I thought it would be nice to set the record straight on what is known and what is not known about this great flood.

We all know that Crystal Creek Rapid was enlarged to become one of the “big three” rapids in Grand Canyon. But through the years, enough rounds of “telephone” regarding the dimensions of the flood, what was affected, and how much water was involved, have perhaps obscured what really happened.

Data for this flood comes from USGS Professional Paper 980, published in 1977 by Maurice Cooley, B. N. Aldridge, and Robert Euler (Euler contributed results regarding the effects of the flood on archaeological resources).

The storm that produced the flood was regional in scope and affected all of southwestern Utah, southern Nevada, northern Arizona and southeastern California. Each of these four states saw major flooding and although the North Rim area received the most precipitation at Grand Canyon, not all of the drainages between Saddle Canyon and Deer Creek felt the brunt of this powerful storm.

The South Rim also did not receive as much precipitation, just 10 miles to the south. At the time of the storm, there was very little snowpack on the North Rim. There was zero snow on the ground at both Grand Canyon Village and at Jacob Lake, only an estimated 4 to 6 inches blanketed the ground on the North Rim in early December and only a trace of snow fell during the storm. 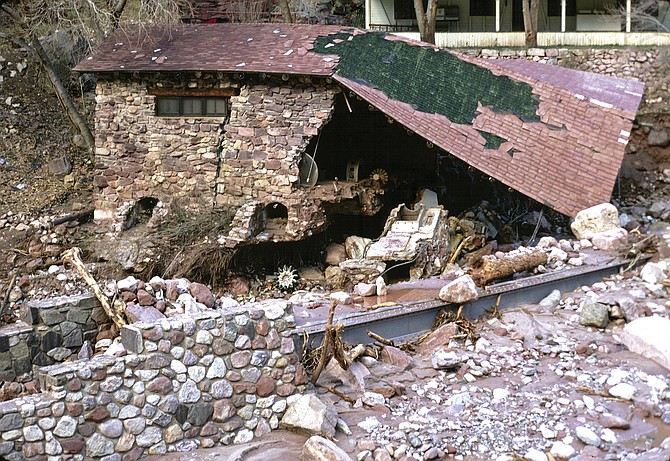 The original 1930s Roaring Springs Pumphouse on the North Rim was heavily damaged in the flood event of 1966. (Photo/NPS/Dan Cockrum)

The last significant precipitation before the December event was on Nov. 8 and 9, 1966 and it can be inferred that at the time of the big rain, the ground was moist but not completely saturated.

The storm moved in from the southwest and drifted northeast across the region. Precise rainfall data for the North Rim were not available because it had closed for the season in early November and the rainfall gages were not routinely monitored.

There were two gauges in 1966 – one at the North Rim Entrance Station (about 13 miles from the rim) and the other at Bright Angel Ranger Station (near the rim where the administrative area is today).

At the Entrance Station, between Nov. 1 and Dec. 7, 1966, 17 inches of rain had fallen. NPS personnel estimated that a maximum of only three inches was from the prior November storm and that the remainder — 14 inches — is the amount that fell during the December storm.

At the ranger station on the rim, the gauge was not read between October 1966 and May 1967 but it held about 83 percent of that found at the entrance station gauge. 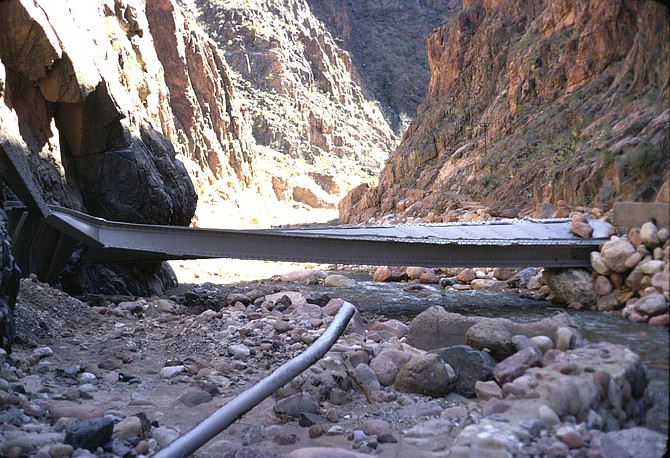 A North Kaibab trail bridge and section of the Trans-canyon Waterline were damaged after the 1966 flood event. The bridge had been constructed in 1965 (Photo/Dan Cockrum/NPS)

This means that between 11 and 14 inches of rain must have fallen on the North Rim during the December flood. This is a good number to use on your trips when describing the flood.

Ranger John Riffey was monitoring his gauge at Toroweap Valley and he reported that precipitation started at 1 a.m. Dec. 3 and continued through 9 p.m. the same day (20 hours of rainfall).

After a 21-hour break, it started again on Dec. 4 at 6 p.m. and, with the exception of only three hours, continued non-stop until 4 a.m. on Dec. 7, making for 55 hours of rain in a 58 hour period. The total measured precipitation at Toroweap (elevation 4,775 ft.) for the five-day period was 6.05 inches — nearly equal to the full year average of 6.8 inches. Since Toroweap is a bit west of the North Rim and a lot lower in elevation, it is surmised that the most intense rainfall over the North Rim drainages likely fell between Dec. 5 and 7 and that any perceived lack of certainty regarding the precipitation data from the rain gauges is probably near to being correct at 11 to 14 inches.

Flood damage was reported from a series of after-storm reconnaissance missions in the canyon. Four distinct areas were shown to have high runoff.

The first was a 5 to 7-mile-wide area running from Crystal to Nankoweap creeks, including not only Crystal and Bright Angel creeks, but also Clear Creek, Lava Chuar and Kwagunt basins. Curiously, Unkar, Vishnu and Saddle canyons showed little evidence of high runoff, as well as the Crystal drainage on the rim and the upper portions of the Bright Angel drainage.

This suggests that much of the precipitation likely fell within the canyon rather than on top of the rim (although certain drainages on the rim did see heavy flooding). The other three zones with significant evidence for extreme runoff were the Modred, Merlin, and Gawain Abysses in Shinumo Creek; at the North Rim Entrance Station where Shinumo Creek, Bright Angel Creek, and North Canyon Wash converge; and near the Cocks Comb at the head of North and South canyons.

Mud and debris flows were reported in many of the side canyons, as well as severe lateral and downcutting erosion in numerous stream channels. Flow within Roaring Springs was also affected with a measured discharge on Dec. 9 of 150 cfs (baseline flow is about 21 cfs).

NPS personnel reported that water emerging from the spring was red and muddy on Dec. 7, turning to yellow on Dec. 9. The pump house at Roaring Springs was damaged when 2 ½ feet of water ran through the building and the Powerhouse just downstream from there (where the operator lived) was destroyed. 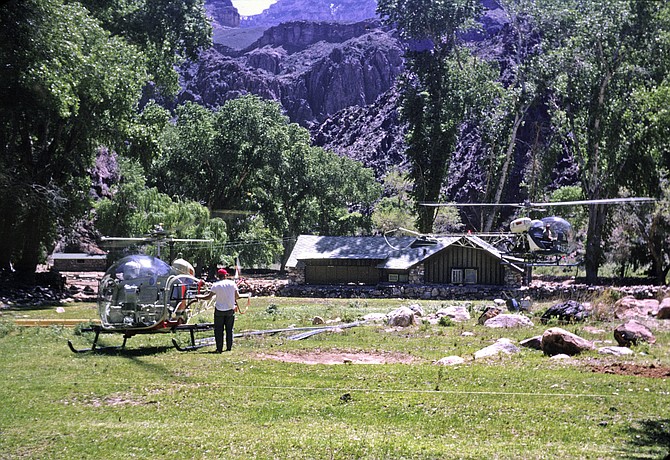 A contract helicopter ferries materials to Phantom Ranch prior to the flood of 1966. (Photo/NPS)

In the 1977 USGS Professional Paper, it was reported that the flood washed out the trail in Bright Angel Canyon and “a $2 million pipeline” along Bright Angel Creek, and that “3 ½ years and an additional $5 million were required to rebuild the pipeline and repair the trail.” Severe damage was reported at Phantom Ranch as well, although the buildings here were no more than about 44 years old at the time of the flood.

However, archaeological sites nearly 1,000 years old were affected by runoff from the flood as well. In Clear Creek, the side of a mescal pit was breached and destroyed by channel erosion. It was also reported that in Dragon Creek (one the two major tributaries of Crystal Creek) that the 1966 flood might have been the largest in this drainage since the Pueblo abandonment in about 1150 AD.

This is where an 8½ by 11-foot diameter mescal pit (and not a dwelling site as is commonly heard) was completely obliterated by a mudflow. It was not known if the mescal pit was merely covered by the mudflow or eroded away entirely. William Wallace Bass’s Shinumo Gardens largely escaped the highest runoff levels in the flood but the water did flood the area where his gardens used to be.

At this time, let’s remember the storm 50 years ago that continues to affect our lives and those of anyone who runs Crystal Creek Rapid. In summary, about 11 to 14 inches of rain fell within a three to four day period, on no more than six inches of snow. Crystal Creek saw an amazing 30,000+ cfs and Bright Angel Creek over 4,000 cfs. Two mescal pits were affected and one was obliterated completely. May we all live long enough to see another one of these fantastic storms!