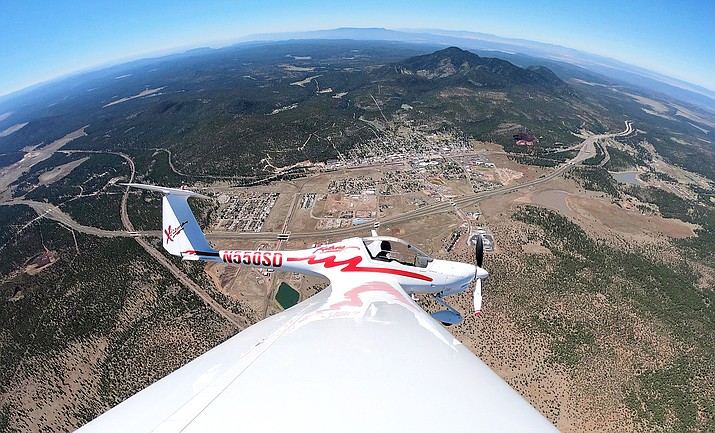 Soaring over Williams wasn’t quite what I expected.

I’ve hiked Bill Williams, climbed in Sycamore Canyon and done a bit of mountain biking, so I’ve seen a lot of the beauty of Williams.

But seeing it from the air was something else.

There are more hills than I expected, with these secret valleys and old roads. There is water and color and this evergreen forest that goes on forever.

What is out there is truly spectacular. 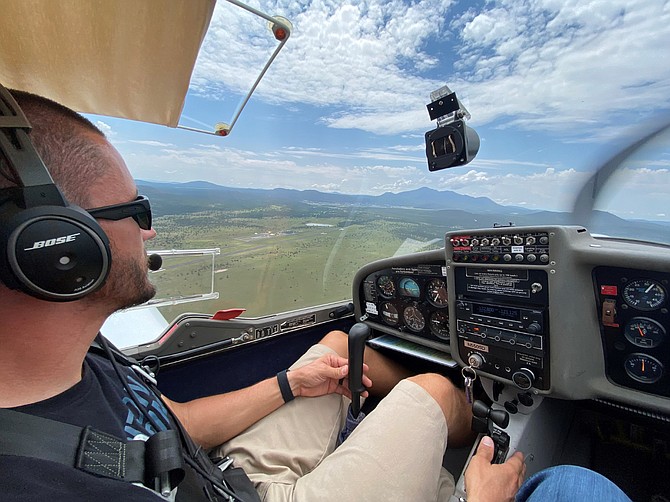 I’ve always looked at aviation as a necessity, a glorified way of getting from point A to point B, and I’ve flown in my share of commercial jets and helicopters and puddle jumpers and even a float plane. Yet last week when my Arizona Soaring glider pilot turned off the engine and we soared with nothing but lift, I have to admit I discovered a new-found love in flying.

My pilot, Shad Coulson, is a seasoned aviator with Arizona Soaring, a company that has recently set up a satellite shop at H.A. Clark Airport in Williams. Although dipping its wings in the northern Arizona sky is new, the company has a long history of glider training and rides at their base near the Estrella Mountains in Maricopa, Arizona.

I planned to meet Shad at the Williams airport, ask him a few questions about the operation, grab some photos and go back to the office.

However, after chatting a few minutes, he asked, “You are going to go up with me, right?”

It was tempting. The plane wasn’t a typical glider that was towed behind another plane. This was a motor glider that was new and shiny and red, with wings that took up the whole width of the runway.

The empty airport and blue skies drew me in — I was sold.

After getting buckled in, Shad conducted his pre-flight safety check, cranked the engine and we began rolling down the taxi way.

The extra-long wings of the Diamond HK-36 Katana clipped the sunflowers as we headed for the runway.

Within minutes we were up and cruising over Kaibab forest, past Williams and toward Sycamore Rim. Bill Williams Mountain loomed high and the geometric designs of town took shape. Who knew that Grand Canyon Railway Hotel looks like a figure eight from the air? Or that so many trucks can fit in the lot behind Love’s?

“One reason we decided to come here was because of the low volume airport,” Shad said. “I can fly the plane all the way back in just gliding and just turn the engine on to taxi back in.”

The company is hoping to capitalize on the tourists heading to Williams and the Grand Canyon, yet give people a unique experience without the hordes of people and traffic.

The plane gains altitude as it heads south and once the plane reaches peak altitude, the pilot turns it around and cuts the engine as it soars over Williams and back north.

Although Shad has numerous certifications, he said piloting a glider is his favorite type of flying.

“For me it’s a visceral, engaged form of aviation,” he said. “You are taking in so much information to try to assess what the air mass is doing, because that is what is keeping me in the air. I have to be thinking ahead and planning where I want to go. There is a safety element too, I always have to know where I can land.”

When Shad cuts the motor over Williams, there is just a faint sound of wind rushing by the plane. The large overhead canopy reveals views all the way to the San Francisco Peaks. 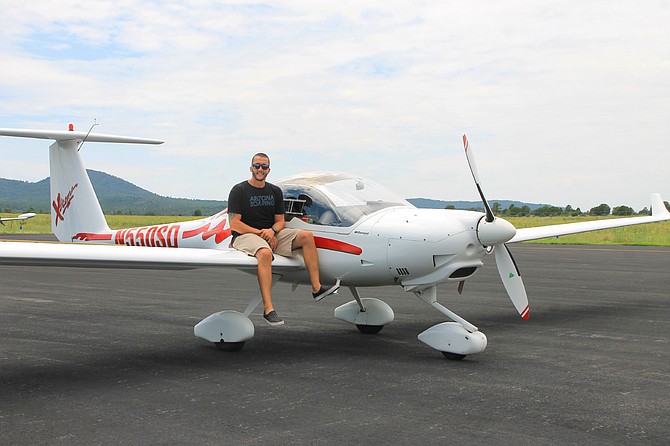 Arizona Soaring is based out of Estrella Sailport, a privately owned airport just used for gliders in the mountains of Maricopa, Arizona.

The company was established as a glider training and rental facility in 1969 and continues the tradition today with 15 sailplanes, four tow planes and several specialty aircraft for aerobatics. They offer everything from mellow soaring rides along the Estrella Mountains to wild and thrilling technical rides.

More information about glider flights in Williams can be found by calling (520) 637-4465. Flights are available Thursday through Sunday, or by request.