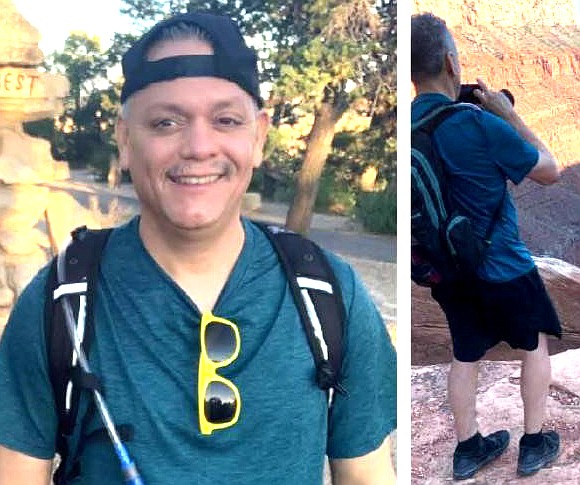 Arturo Hernandez, 48, of Surprise, Arizona was last seen east of Hermit Creek Camp on the Tonto Trail on Aug. 22. (Photo/NPS)

National Park Service officials say 48-year-old Arturo Hernandez was located about 2 p.m. by search and rescue personnel in a helicopter.

They said Hernandez was found along the Hermit Trail near Breezy Point and was in stable condition and awaiting helicopter evacuation.

Several hours later, one overdue hiker reached the trailhead without incident but the other hiker — Hernandez — did not.

Hernandez, of Surprise, had been last seen east of Hermit Creek Camp on the Tonto Trail around 11 a.m. Sunday.

Park rangers hiked the Hermit Trail and did an aerial search Monday, but were unable to locate Hernandez.

Tuesday's search involved six ground teams and a National Park Service helicopter and was focused on areas near the Hermit and Tonto trails and the Monument Creek drainage.

The other hiker, Arturo Hernandez, 48, of Surprise, Arizona was last seen east of Hermit Creek Camp on the Tonto Trail on Aug. 22 at approximately 11 a.m.

On Aug. 23, rangers hiked the Hermit Trail and performed aerial searching and were unable to locate Hernandez.

Today’s operations include six ground teams of 12 people total as well as aerial searches with the National Park Service helicopter. Search efforts will focus on areas near the Hermit and Tonto Trails as well as the Monument Creek drainage.