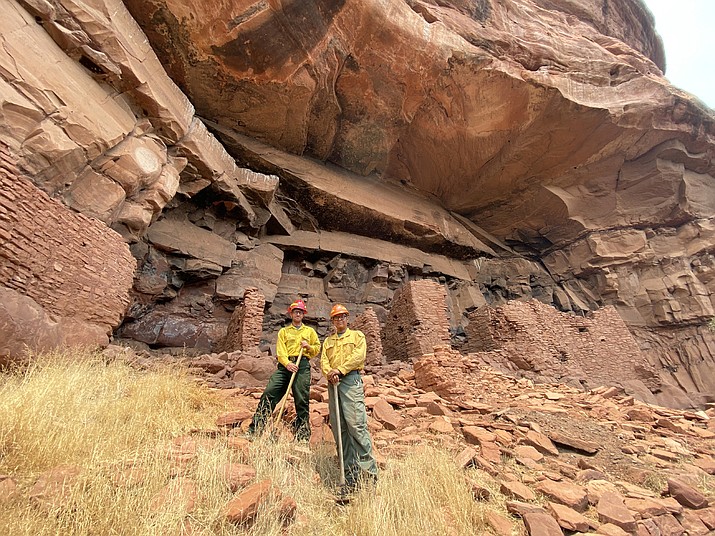 WILLIAMS, Ariz. — The lightening-caused Rafael Fire that began June 18, surprised several northern Arizona communities when it went from a slow burning, 1,000-acre fire to a raging 18,000-acre fire within a 24-hour period, eventually tearing through Sycamore Canyon southeast of Williams and ultimately burning 78,065 acres before it was extinguished.

While the immediate threat of the raging fire was community safety and structural protection, the threat to the area’s historical and archaeological resources were also on the minds of many. 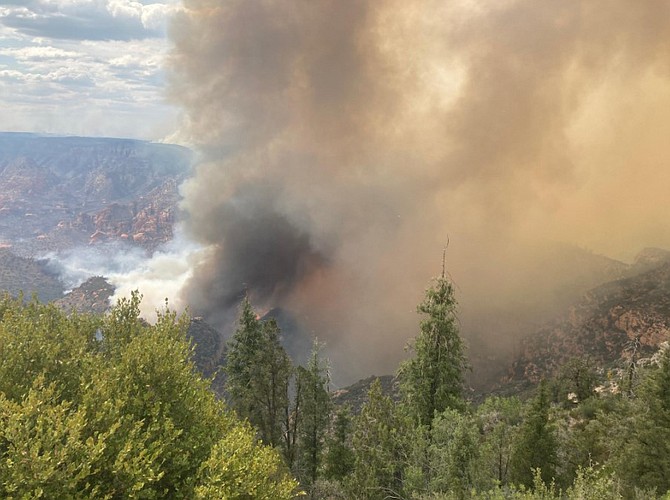 Resource specialists on the fire were not only concerned with wooden structures such as cabins and historic railroad grades, but also the numerous cliff dwellings, habitation sites and rock art panels scattered throughout the region.

“As it burned toward Sedona, we were very concerned about Sinagua cliff dwellings and habitation sites,” said Kaibab National Forest North Zone Archaeologist Michael Terlep, who was assigned to the fire. “The open air sites in the open flats had burned previously and we weren’t as concerned about those.”

However, Terlep said the more sheltered sites such as those at Honanki and Palatki have wooden elements associated with them, which was a concern, as was a concern with heat impacts to the numerous prehistoric rock art panels which have the potential to be destroyed.

Honanki and its sister site, Palatki, developed by the Sinagua, ancestors of the Hopi, were the largest cliff dwellings of the Red Rock country between AD 1150 – 1350 and are preserved on Prescott National Forest today.

“Even if the fire doesn’t get in there, the heat can cause exfoliation and we can lose some of those rock art panels,” Terlep said. “With this fire we were absolutely concerned about rock art panels — both pictographs and petroglyphs are in the Sedona area.”

As the fire flared on the third day, managers were concerned as the fire surged up Sycamore Canyon on to Kaibab National Forest.

“On the Kaibab one of our concerns were the open ball courts and other habitations,” he said. 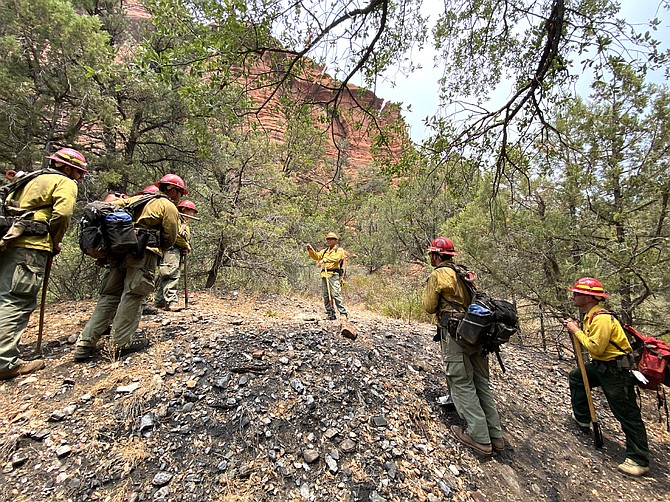 Terlep said when he initially received notice about the Rafael Fire, he began searching the U.S. Forest Service database for potential cultural resources in the fire’s path.

“When we have knowledge of which way the fire might go, how the winds are blowing, we’ll expand that out and identify the areas and get that info to the fire crews,” he said.

Although not much can be done to preserve sites where fire is actively burning, Terlep said archaeologists can explore the fire’s potential path to document threatened sites.

“In many cases we are dealing with millions of acres of federal lands, and we may only have one to 10 percent of the places inventoried,” he said. “Kaibab is better than most, and on this fire we were able to survey in front of the dozers. We were literally doing archaeology, in the moment, right on the spot.”

With knowledge of the fire’s path, Terlep said fire crews were able to protect some sites by trimming vegetation, back burning or even providing protective coverings, often used in the case of cabins.

“We have to consider whether protecting them will be more detrimental than allowing the fire to burn over them,” Terlep said. “We are concerned about the fire burning sensitive things such as cliff dwellings and cabins, but for the most part archaeological sites have burned hundreds of times depending on their age.”

“Fuel loads are so much heavier now — in the past fires burned every 7-10 years,” he said. “But the forests we are looking at today aren’t the forests of the past and fires are potentially going to be burning hotter.” 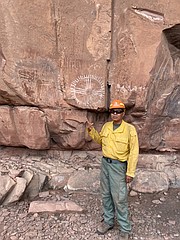 One benefit for the Rafael Fire was the deployment of local personnel.

“I was brought in to be a resource advisor, because I used to live in Flagstaff,” Terlep said. “Anytime there are local personnel – fire crews that are familiar with both the resources of that particular forest whether it cultural, biological or even geological — just having that local knowledge can quickly change the course of productivity on a fire.”

In addition to the vast resource knowledge of local fire personnel, fighting a fire near their homes can become a personal interest for fire fighters.

“Our fire crews were exceptional to work with,” Terlep said. “Here in the southwest a lot of the fire crews are Native — we had Zuni, Hopi and Navajo crews on the Rafael Fire — and many of these sites were of their ancestors.”

Terlep said most fire fighters are interested in protecting cultural and biological resources during fires.

“Despite the chaotic activity and pulling 16-hour days, the fire crews look forward to getting out there and helping protect these resources,” he said.

The Rafael Fire burned nearly 10 miles from Prescott National Forest up the Rim into the Kaibab National Forest and Sycamore Canyon Wilderness Area, burning with high severity in some of the tight canyons.

After nearly two weeks of burning, monsoon rains and fire management stopped the fire from progressing.

When the fire was extinguished, members of the Rafael Fire Burned Area Emergency Response (BAER) team, responded to the area to assess the damage. 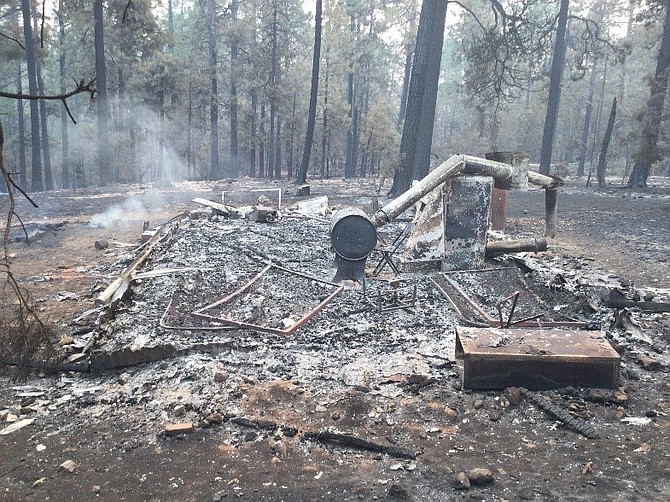 The Buck Ridge Cabin on Coconino National Forest was a total loss to the fire. (Photos/USFS)

“After the fire is over we go in and we actually assess what the damage is now that the vegetation is gone, see if they (cultural sites) are in drainages and consider whether they can be washed away,” Terlep said.

The group, made up of scientists such as hydrologists, geologists, soil scientists, botanists and archaeologists, collected data during ground surveys and completed GIS and modeling to evaluate the post-fire risks.

“In some areas were weren’t as concerned with burning as we were about post fire impacts on those sites,” Terlep said. “Exposure and post fire flooding can be more detrimental than the fire itself.”

The results showed that the majority of the burned area, 63 percent, was considered low-severity, and 7 percent was high severity.

The fire severity has a significant outcome on drainage and flood risks.

“There is high potential for a flood to go through a site and expose human remains or burials,” he said. “You also have a bunch of dead trees that will uproot and expose buried deposits or destroy architecture.”

Some of the property downstream includes hazards to the many historic resources on the Kaibab, Coconino and Prescott national forests.

The final assessment indicated vulnerability to resources within Sycamore Canyon Wilderness and the downstream drainage to the confluence with the Verde River. This includes hazard trees, stump holes, falling rocks, debris flows and possible flooding with runoff to resources downstream.