Brian Dieker on the Colorado River in 1994. Dierker is a river runner, adventurer and businessman and hosts the Big Adventures with Brian Dierker podcast that shares stories about the people who have left a legacy at the Grand Canyon. (Photo/Brian Dierker, Steiger/Bros)

GRAND CANYON, Ariz. — Whether you have visited or live at the Grand Canyon, there’s always more to learn and Big Adventure’s podcast host Brian Dierker is the perfect avenue for listeners to meet the people who have helped shape, preserve and treasure this majestic chasm.

Dierker interviews biologists, archeologists, doctors, conservationists, politicians, river runners, hikers and anyone else who is associated with the Grand Canyon and the Colorado River. Dierker, who has been a river runner and has spent the last 50 years exploring the Colorado River, digs deep with his questions.

With his husky voice and acute understanding of the Grand Canyon, Dierker explores each of his guest’s personal and professional lives, leaving listeners eager for the next episode.

“I’ve run the Colorado River since 1970, both as a professional boatman and scientific research government contractor and have met some incredible people in this community,” said Dierker, who was born and raised in Flagstaff. “I wanted to take advantage of my access to these people and see if they would sit and talk about themselves to get their stories and their background. It’s been fantastic.”

Dierker’s first trip down the Colorado River was when he was 14 years old. He started his river running career with Dick McCallum’s Grand Canyon Youth Expeditions and is known for doing more scientific research river trips than any other boatman. 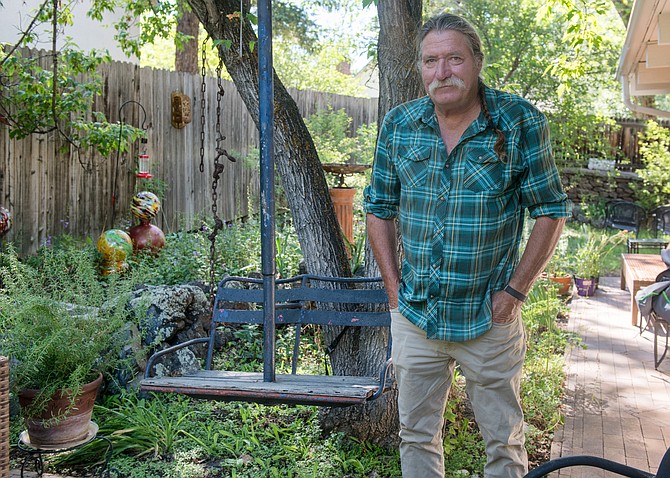 Brian Dierker stands next to a ski lift chair in his backyard. The chair is one of the first lift chairs at the Arizona Snowbowl. Dierker owns Humphrey’s Summit Ski Shop in Flagstaff and hosts Big Adventures with Brian Dierker podcast. (V. Ronnie Tierney/WGCN)

Dierker selects his guests from a well-rounded pool of friends, friends of friends and acquaintances.

Dierker’s style of interviewing guests is both stimulating and educational. He spends time extracting historical and personal history of the Grand Canyon along with clips about interviewee’s lives.

Big Adventures with Brian Dierker has some fun surprises too, like his podcast interview with professional boatman, Lew Steiger featuring audio clips of the legendary and eccentric Georgie White who was a river-running guide in the Grand Canyon for 45 years and made her mark as the first woman to run the Colorado River as a commercial enterprise. She also introduced innovative adjustments to running the Colorado River. The Georgie Rapid at river mile 24 in the Grand Canyon is her namesake.

Northern Arizona Resident and Experienced Hiker, Haley Schist has tuned into Big Adventures podcasts for a number of years.

“Brian has chosen great content and interesting people in northern Arizona,” she said. “These are the people who are just like us, but went out and did something awesome, beyond our normal mundane lives. They’re our very own community celebrities.”

“They talked me into doing the show,” Dierker said.

“Gavin and I work in the film industry and one day while working on a job we got to talking and pondered starting a podcast,” Knight said. “We both knew Brian a long time and knew his history in the Grand Canyon, so we decided we would ask him. I’m the logistic person and Gavin is the brains behind the technology.”

Boughner, who produces the show, said Dierker was the ideal fit for the podcast host.

“Brian has a wonderful voice and great stories to tell,” he said. “I set Brian up with recording equipment and he decides who his guest will be. He uploads the files every couple weeks. It’s been a blast and a labor of love.”

Currently, Big Adventures with Brian Dierker has captured an audience of 7,000 regular listeners.

Along with Dierker’s long history in the Grand Canyon, both on and off the river, Dierker has worked on the movie production and scouting.

One project led actor and director Sean Penn to cast Dierker for a major supporting role in his movie, “Into the Wild.”

“It was fun and the critics were kind,” Dierker said. “I had some other interests for acting parts but couldn’t drop my Colorado River contracting work to audition. I missed out on some good opportunities.

Dierker said he continues to receive calls for commercials or documentaries that need logistic support.

“If I do get re-discovered, I’d love that work,” Dierker said.

Future plans for Big Adventures with Brian Dierker include continuing to “nibble away at the broad spectrum of people at the Grand Canyon,” but Dierker says he’d like to move into some other aspects, in particular the ski industry.

“I’ve owned my ski shop, Humphrey’s Summit since 1978, and have built industry friends. I’d like to do some podcasts with that aspect,” he said.

Dierker is married to Jennifer who is an archaeologist with Grand Canyon National Park (GCNP).

To listen to Big Adventures with Brian Dierker visit big-adventures-with-brian-dierker.simplecast.com.