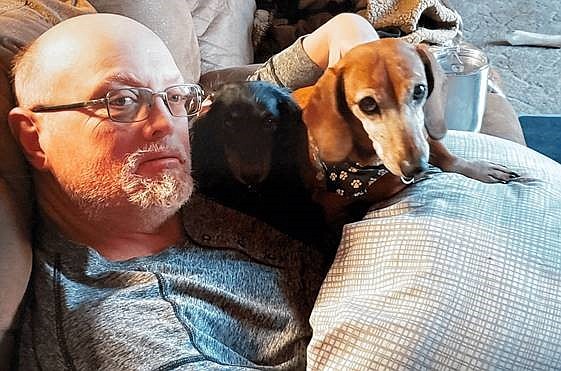 It is with deep sadness that we announce the passing of Jeffrey Leon Lawrence Pettit of Williams, AZ on August 6, 2021 after a brief but courageous battle with COVID-19.

Jeff was born on May 16, 1971 at Flagstaff Medical Center to Jim and Linda Pettit of Williams.

Jeff graduated from Williams High School in 1990, served in the Army National Guard and worked for the City of Williams and volunteered with the Williams Fire Department for over 21 years. Jeff was instrumental in starting and running the annual Fire Prevention Golf Tournament. He spread the holiday cheer by dressing up as Santa or the Grinch for many years.

Jeff was an avid outdoorsman and hunter all of his life and was thrilled to be drawn for this fall’s deer hunt. He also enjoyed fishing, camping and weekly card nights with his former WHS teachers. He loved his fur babies immensely. He cherished spending time with his friends and family and most of all, the love of his life, Ellen. They had just celebrated their 15th wedding anniversary the day before he passed. Known for his immense kindness and elaborate hunting stories, Jeff appreciated being needed and it was obvious by how much he gave of himself to everyone. As the baby of the family, he enjoyed rubbing it in that he often got away with a lot more than his siblings ever did.

Services to honor and celebrate Jeff’s life will be held Saturday, August 14, 2021.

10:00 am – Procession through town starting at 9th Street and Route 66

10:30 am – Graveside service at the Pettit family plots at Williams Cemetery

In lieu of flowers, please consider making a donation to the Northern Arizona Animal Search and Rescue or the Civitan Foundation (Camp Civitan).