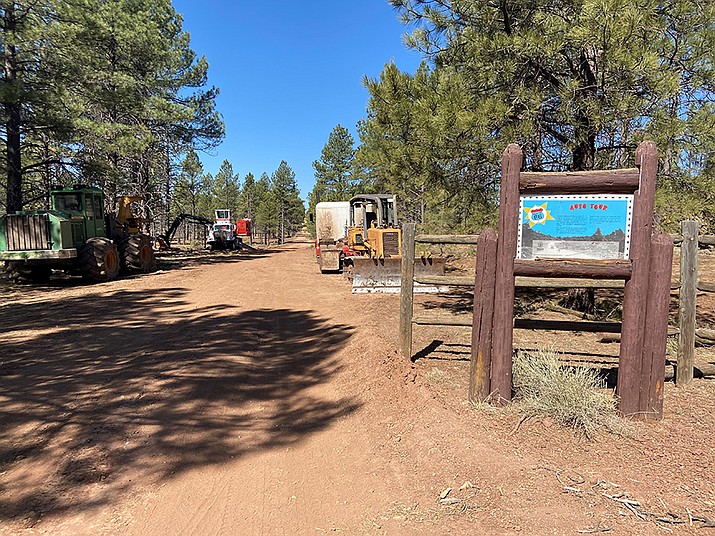 The Saddle Timber Sale is underway in Parks. The USFS has approved the use of a portion of an old Route 66 alignment for operations. (Wendy Howell/WGCN)

Operators of the 1,159-acre Saddle Timber Sale began removing trees in March on the northeast side of the Parks community.

Several residents became concerned when heavy trucks and other machinery were seen using a popular trail that follows an old alignment of Route 66. 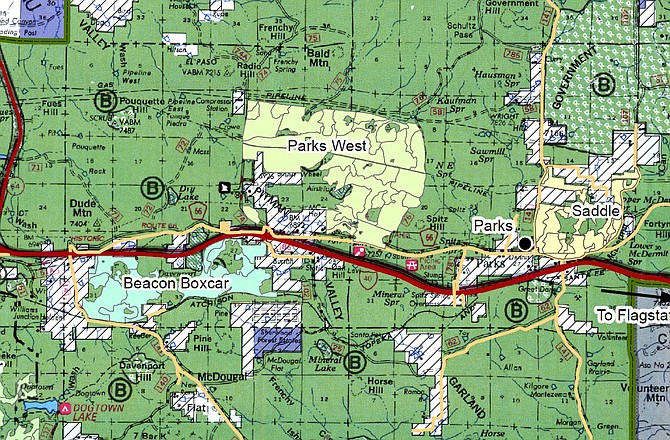 The Saddle Timber Sale (delineated in yellow) is a 1,159-acre project on the east side of Parks. (Map/USFS)

“It came to our attention from a Facebook post,” said Williams District Ranger Debra Mollet. “It took us by surprise.”

Mollet said project managers determined the best landing area for the sale was on the east side of the project near Government Prairie Road.

Managers removed a section of fencing to allow the operators to use a portion of the historic Route 66 alignment to bring trees to the landing area, which would cause less resource damage than creating a new road, Mollet said.

“Because of the condition of it, it’s already gravel and dirt, (we determined) it wouldn’t be damaging to what makes it special,” she said about the historic road.

Andy Payne and another runner make their way through Parks, Arizona during the 1928 Transcontinental Footrace. Payne was the eventual winner of the 3,400 mile race.

Mollet said in addition to the resource damage that comes with a new road, keeping future traffic off a temporary timber sale road can be problematic.

“When we start putting in additional roads, people start using those and go off in the forest,” she said. “It’s really hard to close those down so people don’t get on them again.”

Mollet said the forest completed the formal process for archaeological clearance prior to approving the timber sale. This included an assessment by the Kaibab National Forest archaeologist.

“He gave us the approval to be hauling on that particular part of the old Route 66,” she said. “(He) felt pretty comfortable for the uses we were putting it to with the hauling traffic that were similar to its original character.” 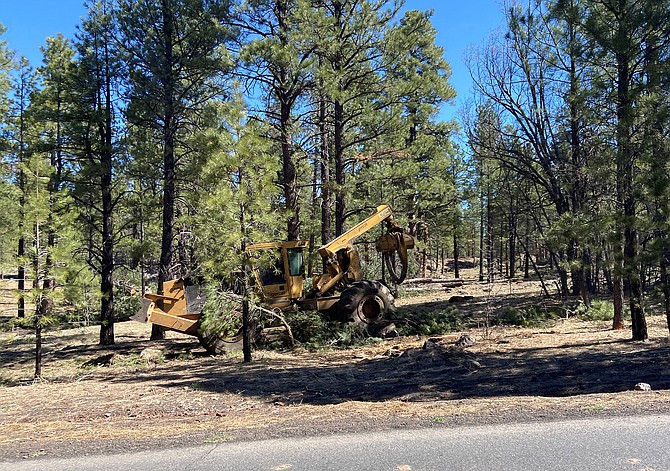 Mollet said the project allows operators to use the eastern end of the trail where there is no remaining historic pavement or concrete.

“Part of it is windrowed off to the side, the pavement was kind of pulled off when they decommissioned the road way back when,” she said.

The project will not allow for any travel on the more preserved areas of the historic alignment.

“We shouldn’t be damaging anything, that part is still intact and there are no plans to touch that in any way with the timber sale,” she said.

Mollet said she and Kaibab archaeologist Charlie Webber have visited the site to ensure operators are within compliance.

The Saddle Timber Sale is expected to continue through the summer with work anticipated to be completed in August.

A second timber sale is scheduled for a future date on the west side of Parks near Moonset Pit.

“We try to present the big picture,” Mollet said. “I’m sure it’s an inconvenience as well. We’re taking trees out of the forest and hopefully folks understand it’s to help protect the homes.”

Mollet said once the project is complete, forest managers will evaluate the timber sale area, replace the fencing and rehabilitate the old roadway.

More information about the history of the section of Route 66 can be found by reading https://www.williamsnews.com/news/2017/aug/08/tracing-their-footsteps-bunion-derby-1928/