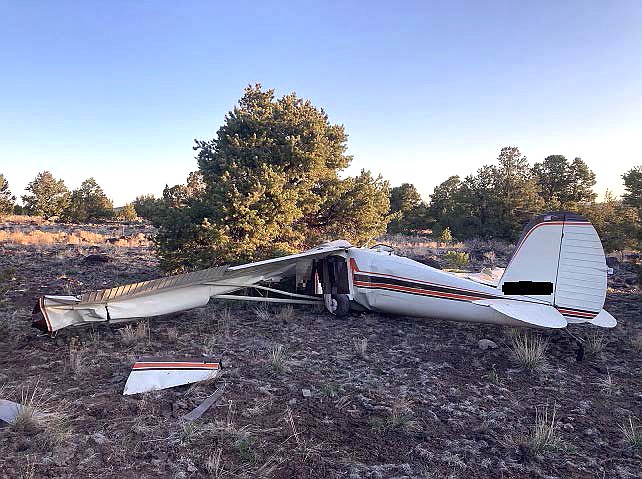 A plane carrying two people crashed near Williams airport April 18. The two occupants died in the crash and were recovered by Williams Fire Department personnel. (Photo/CCSO)

Timothy Michael Gill, 37, and Joylani Roseann Kamalu, 38, of Vista, California were reportedly flying from the Sedona Airport to the Grand Canyon Airport for a scheduled appointment in the Tusayan area.

After a family member of one of the overdue occupants indicated that the missing parties had not reported for work as scheduled on April 18, an investigation was launched. Investigators immediately focused on attempting to search for the aircraft at the Sedona and Grand Canyon airports.

On April 18 around 6 p.m., Coconino County Sheriff’s deputies at the Williams Sub Station were notified of the overdue aircraft.

Due to the potential of the aircraft being in multiple jurisdictions, the Arizona Search and Rescue Coordinator was notified, who in turn requested assistance from the U.S. Air Force Civil Air Patrol to determine the last known direction and location of the aircraft. Information from the Air Force directed search efforts to an area northeast of the Williams airport.

Deputies requested the assistance of the Arizona Department of Public Safety Air Rescue helicopter out of Kingman.

On April 19 at 1:40 a.m., DPS Air Rescue located the aircraft in a wooded area near the Williams airport. Both occupants were confirmed deceased in the downed aircraft.