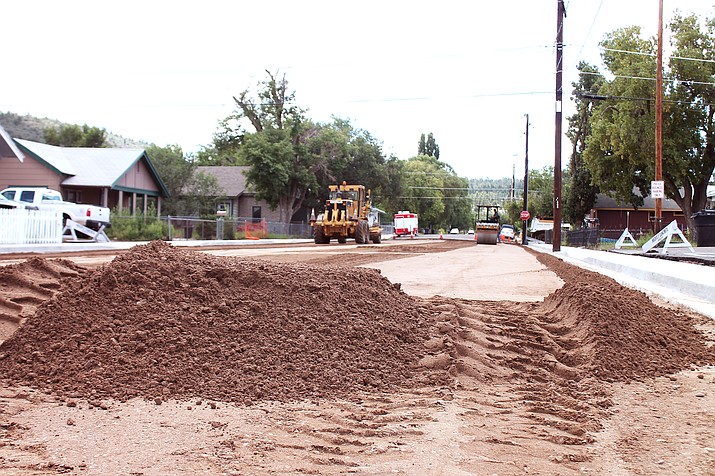 WILLIAMS, Ariz. — With March sales and BBB tax revenues up 12 percent over last year, the Williams City Council voted April 8 to remove the city’s hiring freeze and move forward with planned city infrastructure projects, based on a budget committee’s recommendations.

“These are all things that were budgeted last year when we stopped spending money,” said Vice-mayor Don Dent. “We didn’t want to spend it until we knew where we were going to come out on money.”

Dent said the council anticipated a much worse fall-out of revenue because of the coronavirus and is pleased with the signs of recovery.

“If there’s any indication by how busy it is getting downtown, I think our revenues are going to return,” he said.

“We promised the fire department that when the budget opened back up that was one of the things we were going to do,” said Vice Mayor Don Dent.

The council also approved the hiring of a 30-hour per week aide for the Williams Public Library. The library has had to limit its hours because of the reduced staff. The part-time position will have a salary range of $30,576 - $41,101.

“That will give us some scheduling and flexibility at the library,” Dent said. “Right now if there is a sickness or any issues there we don’t even have anybody that can keep it open, they just close it up.”

Two part-time police internship positions have been reinstated at the Williams Police Department. The positions are 20 hours per week.

The City Council is also reworking the pay scale for city employees, with staff suggesting the low wages are preventing qualified applicants from applying for summer positions.

“We are trying to hire some of our entry level jobs at $12.84 per hour and we aren’t even getting applications,” Dent said. “We aren’t even in the ballpark.”

Dent said the city is also looking at raising the bottom end of the pay scale for current employees.

The council approved $91,793 to install a new electrical regulator for the northeast side of Williams.

“Our electric usage is spiking so much in the summer, especially when the RV parks are full and we’ve got events going on, that it is tripping the system,” Dent said.

The city plans to begin pavement sealing of streets followed by striping. The striping will be about $37,000.

“We are going to seal the main streets through town, which needs to be done badly,” Dent said. “We will come in with striping as soon as the sealing is done.”

The council also accepted a bid from Schultz Contracting for $1.15 million for the Homestead Road Improvement Project.

The project focuses on replacing the water lines throughout the neighborhood. The project is funded through a WIFA (Water Infrastructure Authority) loan.

“This will be a major improvement, not only for the area, but it will help the water flow for the city,” said Mayor John Moore.

The council approved $10,103 for Southwest Explorations to video the Sweetwater Well north of town. The city’s water department had the company look for deviations and evaluate water levels at the well as a first step for applying for grants and loans to continue the development of the well.

“We hired an outfit to come and video in anticipation that hopefully there’s some money (available) for infrastructure so we can actually put the equipment in the well,” Dent said.

If money is secured for the project, the city will complete the well with a pump, new arsenic treatment building and lines to connect to the city’s water system north of town.

Beginning April 19, construction will begin near the Cataract booster pump station on the west side of Williams and move east along Railroad Avenue. A second crew will begin work near Bearizona .

“We want them to finish one section, move away and be done with it,” Janes said. “They’ll be shutting down parking in the areas they are working and then opening up as they move past.”

“We cut down our fleet of carts several years ago because we didn’t have the demand,” Dent said. “We want to get our fleet back up to the full number of carts that we had in the past.”

The council also approved $40,800 for the return of the Cataract Creek cowboy street shows for the summer.

Moore is organizing a May city-wide cleanup. He hopes to have that complete before the summer season.

“We really want town to be clean for that and the car show (Historic Route 66 Car Show),” Moore said.

He said the city will host two military remembrance events this summer including the Moving Wall and Remember the Fallen.