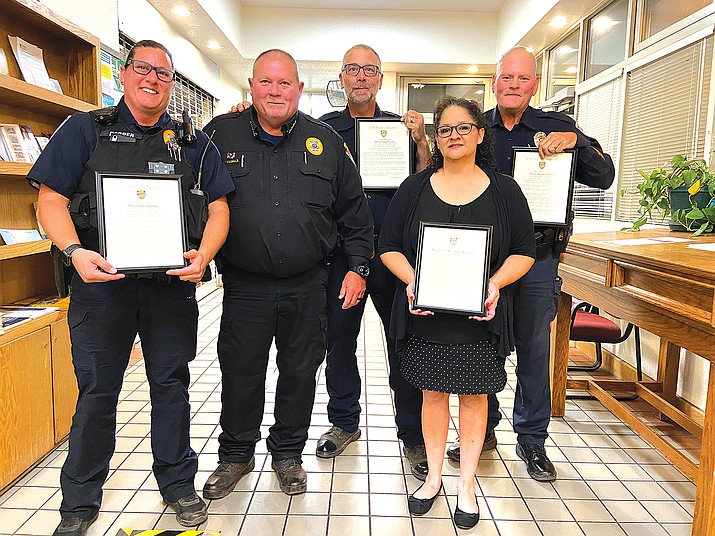 Officers Tracy Cooper and Jason Nicolls along with dispatcher Samantha Sandoval were praised for their assistance on a call for a 16-month old child in distress.

On July 6, Sandoval received a 911 call for an incident near milepost 175 on Interstate 40, however no one on the line.

Sandoval repeatedly called the number back without success.

“After a few more moments, Sandoval called the number on a non-emergency phone line and was able to get ahold of the mother trying to call 911 in regard to her baby not breathing,” said Williams Police Chief Herman Nixon.

Due to the use of a non-emergency line, Sandoval was unable to transfer the call to the Department of Public Safety (DPS). However, she was able to get a location from the woman and directed the woman to call 911.

When a 911 call did not come through, Sandoval spoke to DPS to see if they received the emergency traffic for the call. DPS stated they had not received a phone call or any other information. Sandoval gave DPS the information, dispatched Life Line Ambulance and Williams Police to the last known area of the child not breathing.

Nixon stated that because of Sandoval’s ability to think outside the box, she was able to problem solve in an extremely high stress incident.

Once WPD arrived on scene, they assisted two off-duty law enforcement officers from Las Vegas performing CPR on the child.

The mother explained that she was driving westbound on I-40 when she noticed that her 16-month-old son was not breathing. She was unable to connect with 911 and kept driving until she exited at Exit 165.

Officer Nicolls and Cooper assisted other officers and the distressed mother by keeping the mother calm while medical and other officers performed CPR on the child, Nixon said.

Nixon stated that by conducting themselves in such a manner, officers displayed virtues that WPD seeks in its officers.

“[Officer Cooper and Nicolls] acted in official capacity as police officers, maintaining a professional manner, while remaining calm, in a highly stressful situation due to the child’s age and circumstances. This act of professionalism is what is expected out of all Williams Police Department personnel in these kind of incidents,” Nixon said.

Life Line Ambulance personnel said without assistance from officers, the child would most likely not have survived.

Officer Dwaine Simpson was also recognized Sept. 23 for his response to a man in cardiac arrest in Williams.

Simpson performed CPR and restored the man's heartbeat in the emergency call.

Nixon, Williams Police Department, Williams’ councilmen and members of the Williams community thanked the officers and Sandoval, recognizing their professionalism and courageous effort during the events.