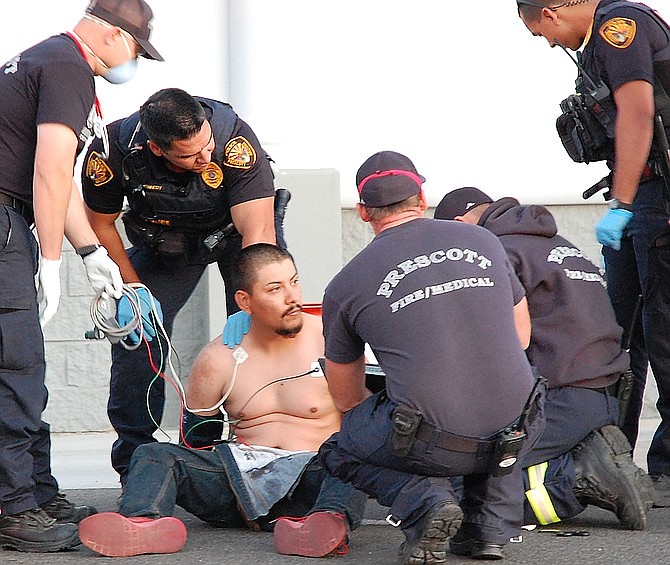 First responders treat Alfredo Saldivar, 28, who was captured by police Wednesday night, May 13, 2020, after he fled from officers at speeds reaching 120 mph and striking cars. (Tim Wiederaenders/Courier)

One of my favorite Jim Carrey movies of all time is “Liar Liar.”

In the 1997 box-office smash, Carrey plays an attorney, Fletcher Reede, who made his career as a pathological liar. The fun begins after his son makes a birthday wish that his father can’t tell a lie for 24 hours.

Let the mayhem begin for a fibbing attorney who magically can’t tell a lie. It’s quite an entertaining watch. I suggest you find it on Amazon if you have yet to see Carrey at his greatest.

One of my favorite scenes in this movie is near the end when Reede is physically, mentally and emotionally defeated because he can’t tell a lie.

His assistant, Gloria, answers the phone and says it’s a client.

“Boss, boss, it’s Skull. He knocked over another ATM. This time at knifepoint. He needs your legal advice.”

Reede walks over to Gloria, takes the phone and holds it about 2 feet from his face while screaming, “Stop breaking the law a---ole!”

Because he couldn’t tell a lie, he had to begrudgingly tell his client the truth. The hard truth, albeit in a hilarious way.

I thought of this scene while helping write and edit a recent story we ran in the Courier, “Prescott Valley police defend video showing K9 use in May arrest.”

You may remember this incident, when 28-year-old Alfredo Saldivar decided to drive more than 100 mph on the side streets of Prescott Valley to evade capture, crashing into multiple vehicles, injuring a woman, and at one point was driving the wrong way on Glassford Hill Road.

At another point, Saldivar attempted to run down an officer, who, fearing for his own life, fired on the suspect, and that still didn’t stop him.

Police eventually cornered him at the Frontier Village Shopping Center after the tire blew out on his truck and he fled. Officers eventually subdued the suspect with a K9 officer, and he was placed under arrest and charged with a multitude of offenses.

Now that PVPD has released body cam video of the incident, specifically when a K9 officer was used to apprehend Saldivar, some people, including his lawyer, are calling into question the use of force.

Saldivar’s attorney claims there was no reason for his client to be “mauled.”

“In light of George Floyd and everything, they thought, ‘We need to change the narrative,’” Attorney Bami Adelayo said. “But the video is what it is. It doesn’t lie.”

“I’m not going to Monday-morning quarterback the video,” Kaufman told ABC 15. “The use of force is going to be dissected. It’s going to be reviewed and reviewed to see if the officer operated within policy.”

On the Facebook post containing the story, locals have had mixed emotions. Some offer their support for the officers involved.

Like this reader, Matt Towns: “Somehow fear of breaking laws has been lost. This video should help in getting it back. Great job to our law enforcement officers and to all public servant professionals.”

Vicki Nicholson says, “I would say the Prescott Valley police are doing a great job with what they have. If you don’t want to see people taken down by K9 officer tell them not to keep doing crimes. We need to support our police not keep slamming them down on social media.”

Some, however, are harshly criticizing PVPD’s actions.

Like this reader, Carol Lynn Springer, who says, “Garbage. I hope this man sues the hell out of the police department.”

Or this reader, C.J. Long, who said, “Prescott Valley police are corrupt as f---!”

Public opinion always varies when it comes to situations like these, especially on a social media platform that brings out the worst from those who know they can hide behind a keyboard and screen with their words.

PVPD spokesperson Jerry Ferguson said Monday that officers were “stopping someone who was obviously posing a deadly threat to the public and resisting arrest.”

“All the video shows is the time when he looks like he was complying, but before that he was getting up and running, and not obeying commands from the officers. Obviously, the officers felt that they needed to totally detain him and ensure the safety of the public.”

In the video while being handcuffed and searched, Saldivar asks why the officers released the dog.

“You guys get your payback? Huh? Why’d you guys get the dog at me? I was already down bro,” Saldivar said in the video, later adding, “You guys shoot me seven times, you let the dog get me, but you know what, I’m going to sue you guys.”