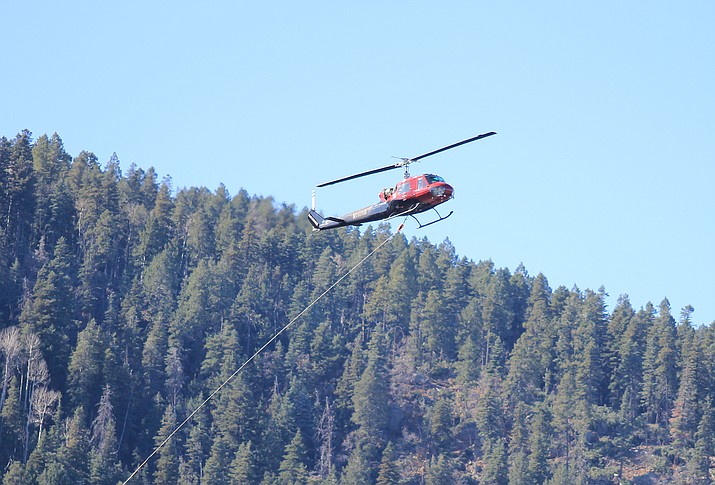 Helicopter logging is set to resume this fall on a steep slope area of Bill Williams Mountain. (Loretta Yerian/WGCN)

WILLIAMS, Ariz. — Forest restoration and fuels reduction work will resume this week on the Bill Williams Mountain Restoration Project, which aims to reduce unnaturally dense timber stands and heavy accumulations of fuel on the highest slopes of the mountain’s north face.

Helicopters will be noticeable from the city of Williams and surrounding communities. The public should also expect an increase in traffic as material removed from the slopes will be hauled out by trucks and chip vans.

Restoration activities are expected to continue through the fall and winter as conditions allow, and area closures will be in place for crew and public safety.

Implementation of this project, a collaborative partnership between The National Forest Foundation, Coconino County, and the Kaibab National Forest, began September 2019. Last year, work began on the 300-acre project area, including hand thinning and removal of timber by helicopter. However, much of the material had to be left on site when the early onset of winter weather halted operations.

Treatments will resume the week of Sept. 14 starting with on-the-ground work. Sawyers will lower stumps in some areas from last year’s thinning, finish cutting trees that were prescribed to be removed, and bundle the material. In mid-September helicopter operations will begin as well as chipping and grinding to remove the materials left on site.

Planning for the second phase of the project is underway.

Bill Williams Mountain is currently closed because of fire danger. After careful consideration of the risks, and evaluation of the extensive mitigation measures to be taken, Kaibab National Forest Supervisor Heather Provencio issued an exemption to the Forest Closure Order for restoration treatments to resume in the Bill Williams Restoration Project.

“We recognize that allowing machinery to operate right now elevates the chances of a human-caused fire on the mountain, and a wildfire in these current conditions could be severe,” said Provencio. “However, if we don’t remove the material now, we run the risk of it remaining on the ground until this time next year, creating an even more critical situation next summer.”

Mitigation measures include more crews and firefighting equipment on scene, additional water sources readily available such as bladder/water pump backpacks on sawyers and water tenders on site, as well as additional fire watch — from the ground and from the air — for early detection and rapid response if a fire were to occur.

The goal is to reduce risks to life and property and protect critical watershed drainages that deliver the vital water supply to the city of Williams as well as to many other communities to the south. This effort will also reduce the risk of a potentially destructive wildfire and the probability of post-wildfire flooding that would likely have devastating effects on the mountain’s natural resources and on essential infrastructure and neighborhoods in the community below.

Together the partners have succeeded in strategic planning and securing of necessary resources to begin the first stages of steep slope restoration treatments.

The National Forest Foundation has brought together funds from multiple contributors that include $1.8 million from the Kaibab National Forest, $800,000 from Coconino County, private foundation funds, $315,000 from the Arizona Water Protection Fund, and another $300,000 from Arizona Department of Forestry and Fire Management.