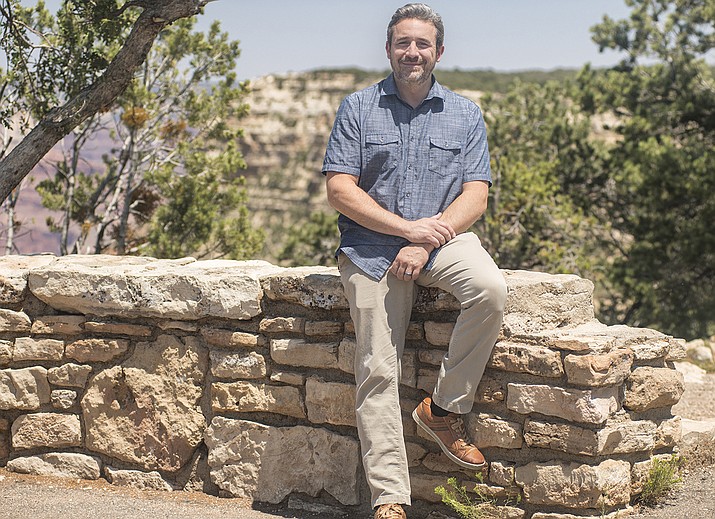 GRAND CANYON, Ariz. — Growing up in Sudbury, Canada, General Manager for Grand Canyon National Park Lodges, Marc Ducharme, thought for sure he would be playing professional hockey for a career.

When he realized that dream wasn’t going to happen, he found himself on the path for a career in the hospitality industry.

“Hospitality was new to me,” said Ducharme, who was 20 years old at that time. “When I saw mixology and wines of the world and one year of studies devoted to culinary, it sounded like the coolest degree ever.”

Not only did Ducharme score, it was a barnburner for his career.

“After college I started my hospitality career as a valet, then bellman, doorman, front desk, line cook, night auditor, server, of a hotel position I haven’t done,” he said.

Eventually Ducharme worked his way up to General Manager of Glacier National Park Lodges, where he served prior to the Grand Canyon. He has been working for Xanterra Travel Collection for seven years.

Ducharme said one of his modus ope-randi is keeping a positive attitude.

“For me its 100 percent attitude and it’s really probably the only thing any of us can control,” he said. “People who know me would be quick to say that my focus world around us.”

Ducharme said he wants to focus on building a community with like-minded positive people and similar values.

“We can train the intricacies of each position here but you can’t change some-one’s attitude,” he said.

Stepping into his new position amid COVID-19 and layoffs, Ducharme said some decision, including the reduction in staffing, were made prior to his arrival.

“I’ve been faced with the follow up and execution of those decisions,” he said. “We want to look at how we want to grow our community back in a year or so and really take the time to plant the seeds— much like a farmer would, so that our community grows the way we want it to in the areas we want it to.”

Ducharme said the toughest thing for him to balance is his fiduciary responsibilities as general manager while being a community leader and friend.

Ducharme’s executive assistant, Laura Drabant said Ducharme has proven that he is ready for the challenges COVID-19 presents.

“Marc seems undaunted by the challenges we are facing right now,” she said.

Despite a time-consuming career, Ducharme enjoys spending time with his family.

“I met my wife, Ashley, on a blind date in White Fish, Montana,” he said. “The director of the chamber there kept trying to set us up. We told her we didn’t need help dating but she persisted. So we went out for a glass of chardonnay and calamari and it was love at first sight.”

Today Ducharme and his wife have two children, four and six.

Claiming he’s a “pretty down to earth guy,” Ducharme can be seen most days eating lunch at the Xanterra employee cafeteria, Fred’s Place.

“It’s delicious and I prefer it,” he said. “I’m one of the employees so I prefer to eat with the employees. I like to experience what we’re doing here.”

His free time is spent with his children, biking, playing at the park or with toys in the sandbox.

When asked about plans for community outreach, Ducharme said his vision include education outreach and extra-curricular activities.

“That’s where my passion will be…in a role that impacts the elementary school….like school floor hockey for kids,” he said.