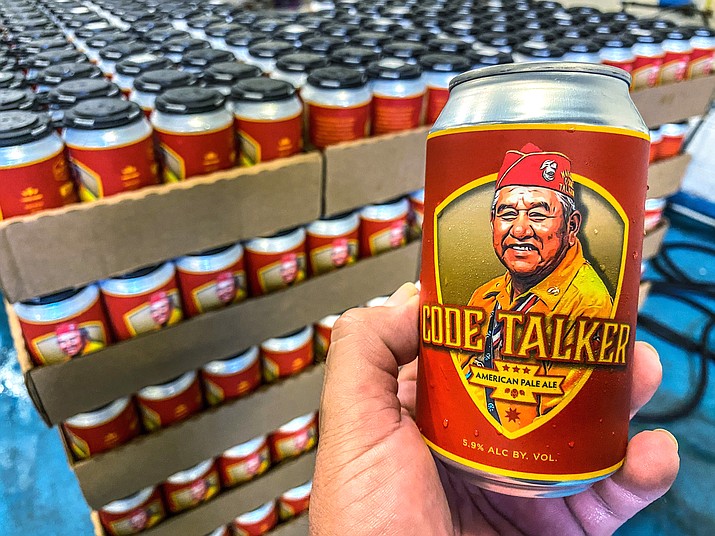 In honor of National Navajo Code Talkers Day the craft brewery recently rereleased its Code Talker American Pale Ale, this time in a can, drawing some rave reviews but also backlash. (LT Goodluck via AP)

Some social media commenters commended the company for bringing awareness to the Navajo Code Talkers, saying Goodluck has the right to honor his grandfather any way he sees fit.

"This can release and design was done out of a good place in my heart, without any malice," LT Goodluck said. "I just wanted to make sure that people who may have never heard of the code talkers or my grandfather know about the importance of Navajo Code Talkers Day through this brew and a tasteful label.

John V. Goodluck was from the town of Lukachukai, Arizona, on the Navajo Nation, and reached the rank of private first class. He served in the third division of the Marine Corps as a Navajo Code Talker. Code talkers were military men from various Native nations who used their languages to secretly communicate information during World War II.

Some have commented that the product's name makes it representative of all code talkers, not just the Navajo, and is tone-deaf because it creates another Native mascot.

"Living in Washington, D.C., my wife and I are obviously cognizant of Native mascots. It was not my intention to prompt Navajo Code Talkers awareness with that negativity," Goodluck said. 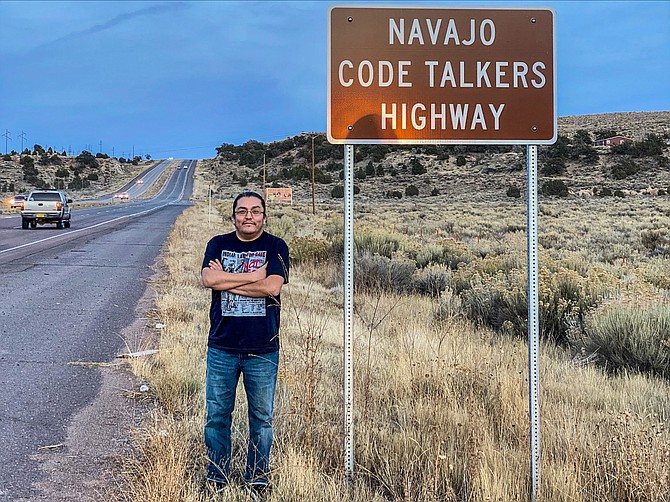 Others took issue with the use of a code talker to promote an alcoholic beverage. For instance, one Facebook commenter who said his grandfather was a code talker noted alcohol has destroyed many Native veterans' lives, and called the use of a Code Talker's image "completely sickening."

Goodluck said he disagrees with those who say the product is tacky because alcohol has ravaged Native communities.

"It's unfortunately a stereotype created by settlers and colonial ideas; however, I don't feel our people should be defined by the stereotype. It was not my intent to hurt anyone, and I apologize to any ancestors of Navajo Code Talkers that felt that way," he said.

Maryanne and Joanne Goodluck, daughters of John V. Goodluck, and his granddaughter Lynette said the controversy has reached their family, with distant relatives upset about the beer.

"Our family is going to purchase one can and not open it, to keep it and honor my dad," Maryanne Goodluck said. "(Navajo Code Talkers Day) is a holy day for us descendants." 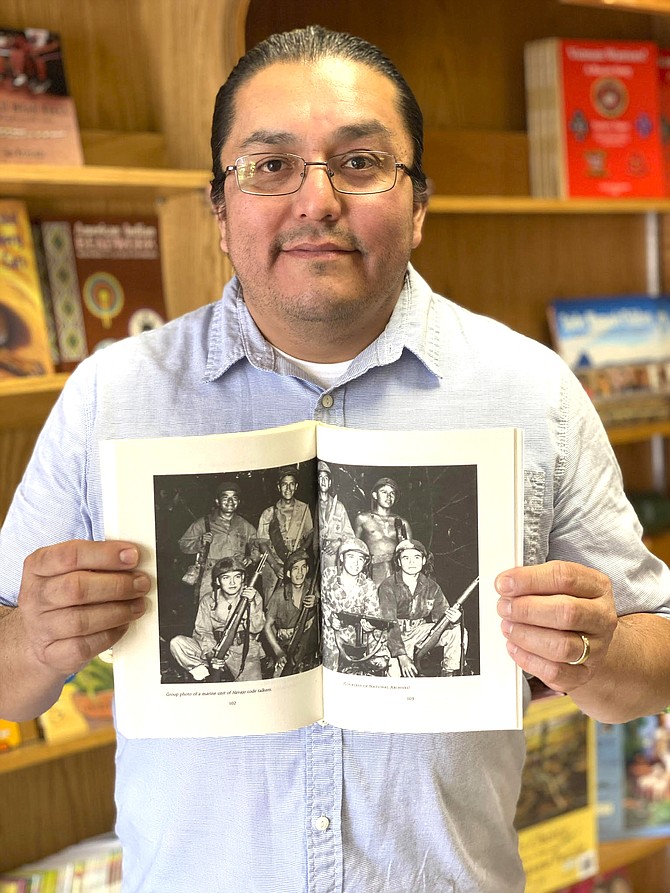 LT Goodluck holds a book with a photo of his grandfather, John V. Goodluck, first row, third from left holding a machine gun, with other Navajo Code Talkers at the Navajo Museum in Window Rock, Arizona. (LT Goodluck via AP)

Despite harassment on social media, the Goodlucks said they support the brew and are very proud in the way it honors their family.

"People are bashing us and saying we're teaching our family and my grandkids to drink alcohol. I'm teaching my grandkids the Navajo language, culture and prayers. Not to drink," Joanne Goodluck said.

Though this is the third iteration of the Code Talker American Pale Ale, it is the first time the brewery has sold it in a can.

In previous years, it was sold at the brewery and distributed to Washington, D.C., restaurants. The brew was praised in national websites and magazines and was always met with positive feedback from the Native American community, LT Goodluck said.

He believes this year's negative comments are directly related to the release of a can.

"It was brought into a negative light by other Native Americans," Goodluck said. "I wanted to have a conversation about Natives in this industry and bring to light there's not a lot of people of color. I'm not a rug weaver or do other traditional Navajo crafts. I make recipes, brew beer, and hopefully people who try my craft believe I do it well."

The can's label features an illustration of John V. Goodluck in his uniform, wearing a traditional Navajo turquoise necklace, leather pouch and a bow guard. On the back is a summary about the Code Talkers and a dedication to John V. Goodluck. 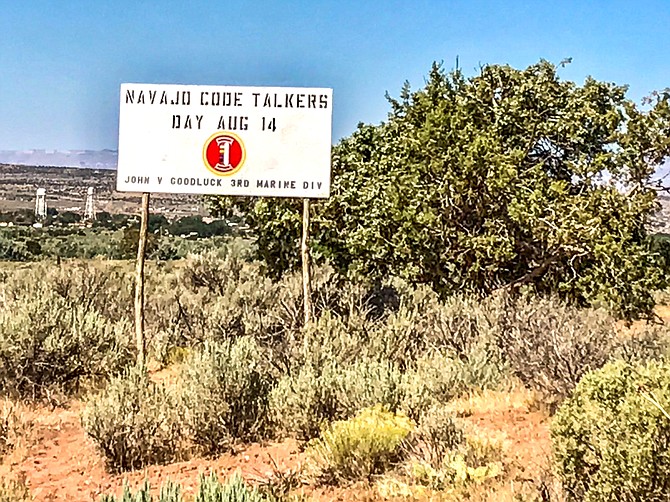 Neither the Navajo Code Talkers Association nor a descendants Facebook group immediately responded to requests for comment.

Some on social media commented that the product was ironic considering alcohol is not allowed in the Navajo Nation. Others called for the beer to be banned.

It would not be the first time an alcoholic beverage was barred due to complaints about the label's sensitivity to Native Americans.

In 1992, the Hornell Brewing Co. was ordered by the Senate to negotiate with the Oglala Sioux over its Crazy Horse malt liquor. The surgeon general and activist groups argued the label promoted negative habits and affected the physical and mental health of Native Americans.

The Senate later revoked the company's license to sell Crazy Horse beer, which caused hype around the product. According to The Associated Press, the beer was selling for five times the price on the black market.

The company argued the beer was not sold in states with large Native American populations. The ban was overturned, citing First Amendment rights, but the state of Washington continued to prohibit sales.

In response to the criticism, Hellbender released a statement on social media reiterating that the beer was created by a Navajo brewer with the intention of honoring his grandfather. The brewery shared a link to a story by DC Beer, which goes into detail about the Goodluck family, John V. Goodluck's military service, the creation of the label and LT Goodluck's vision in brewing the beer.

The brewery has received comments suggesting a portion of the proceeds go to the Navajo Code Talkers Association or Navajo COVID relief. Goodluck said he and the company have been working on identifying an organization that supports the Native American community where the donation can make the most impact. According to Goodluck, they expect to announce the organization chosen within the next few days.

Hellbender has not yet commented on social media requests to donate part of the earnings, but the company has a history of philanthropy. Last week it announced profits from selling its canned Amplify Black Voices brew would be donated to Capital Partners for Education, a mentoring and college success program for low-income students in the Washington, D.C., metro area.

The ale is LT Goodluck's first solo recipe, according to Hellbender's post. Goodluck traveled to the hops harvest in Oregon last year to pick the two hops to showcase in the brew.

"My grandfather used to enjoy Coors," Goodluck said. "This is a departure in flavor from Coors. My whole vision for this beer was to use old school hops with modern brewing techniques."

Code Talker Pale Ale will be sold for only a limited time at the Hellbender Brewery taproom in Washington, D.C. The beer is on tap for $7 a pint or sold in six-packs for $12. Hellbender says the brew is popular, especially with locals who know LT Goodluck, and they expected it to sell out quickly.