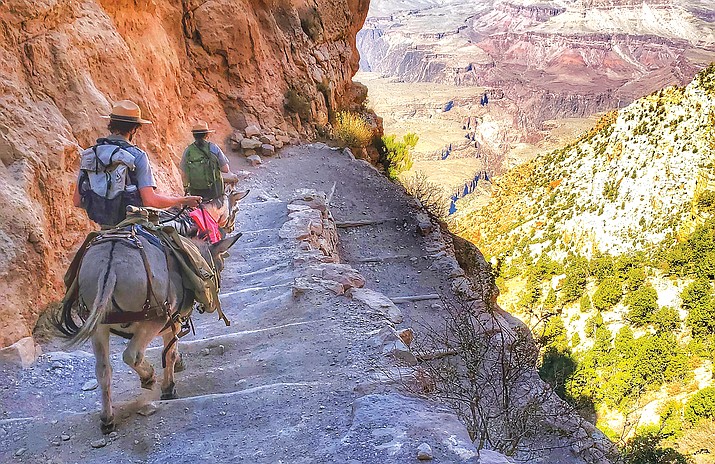 GRAND CANYON, Ariz. — With cooler weather, Grand Canyon visitors expect to see more hikers, runners and backpackers along Grand Canyon’s main corridor trails — what many are not expecting to see is a burro jogging toward them.

“Stock animals are allowed throughout the corridors. You can bring your own stock animal here as long as you get the correct permits.” GCNP Ranger, Kate Hensel

North Kaibab Trail is currently closed to stock animals because of trail damage.

“We were trying to think of different programs we could do now that we really can’t do a ton of programs during COVID,” Oates said. “I Googled burros and that eventually led me to burro racing and then to Amber’s email.”

Brad and Amber were just wrapping up a burro race they had helped host in Tombstone, Arizona when they received Oates' email.

“I’ve never been to the Grand Canyon before and to get to do it with my beloved burros was the icing on the cake,” Amber said.

“It’s kind of a special event for us,” Brad said. “The (rangers) arranged everything and made the appointment and at 9 a.m. we ran around the rim and went down the South Kaibab Trail.”

Brad and Amber took 36 donkeys into the Canyon and 12 burros hiked to Ooh Aaah Point on the South Kaibab Trail.

“Part of the deal was the rangers got their own donkey — their own pack saddles, sawbuck, pick, pan and shovel. We are a mining sport so we got the whole rig,” Brad said. “We set them all up and gave them a training explanation on how to handle a donkey — they’re not stubborn, they’re cautious.”

As Canyon District Interpretive Rangers based at Phantom Ranch or Indian Garden, Oates and Hensel said they are more accustomed to working with mules than burros.

“It was beautiful. We went down about a mile or so and turned around and came back up. We can say our donkeys summited the rim of the South Rim of the Grand Canyon."

A burro is the Spanish word for “donkey”.

A mule is the offspring of a male donkey and a female horse. Horses and donkeys are considered different species, with different numbers of chromosomes. Mules tend to be larger than donkeys, with more delicate bone structure. Both are hearty trail animals.

“Working in the Canyon we have mules bring down our food and supplies every week, but besides seeing the mules down in the corral, I don’t think I have much experience with livestock. I definitely haven’t ran with a burro, so that was really fun but also a new experience,” Oates said. 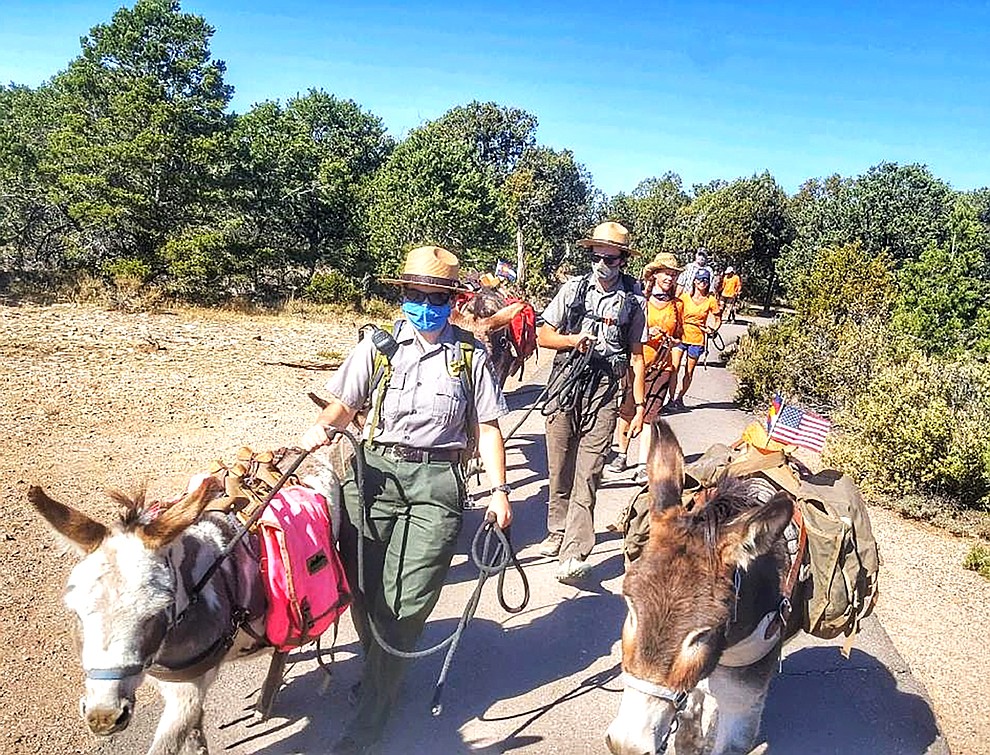 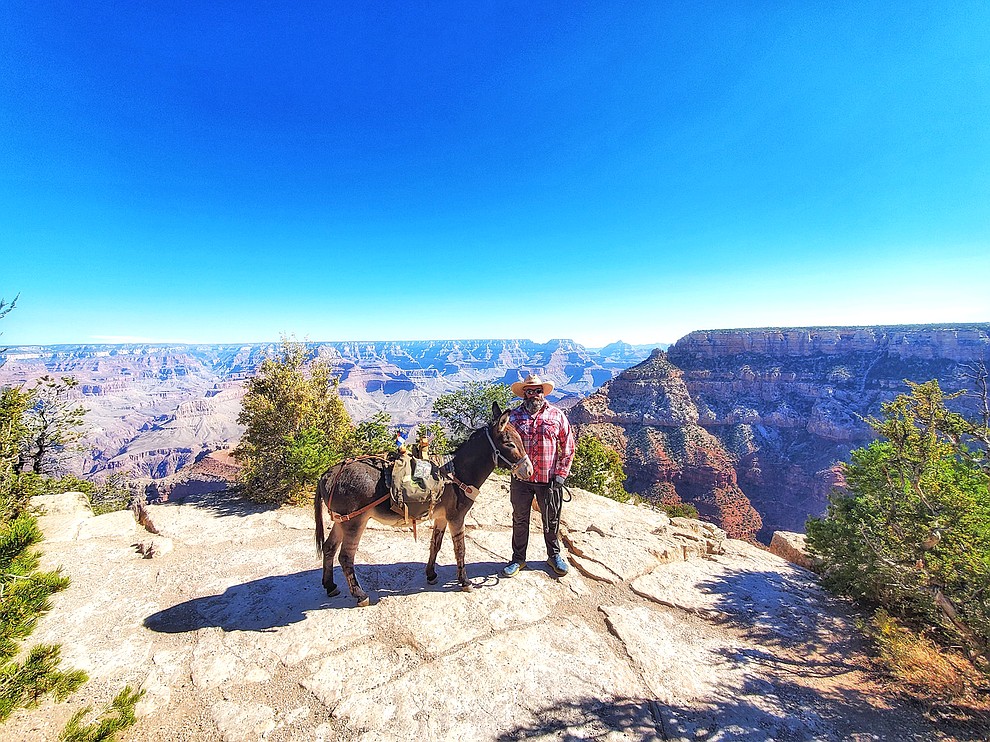 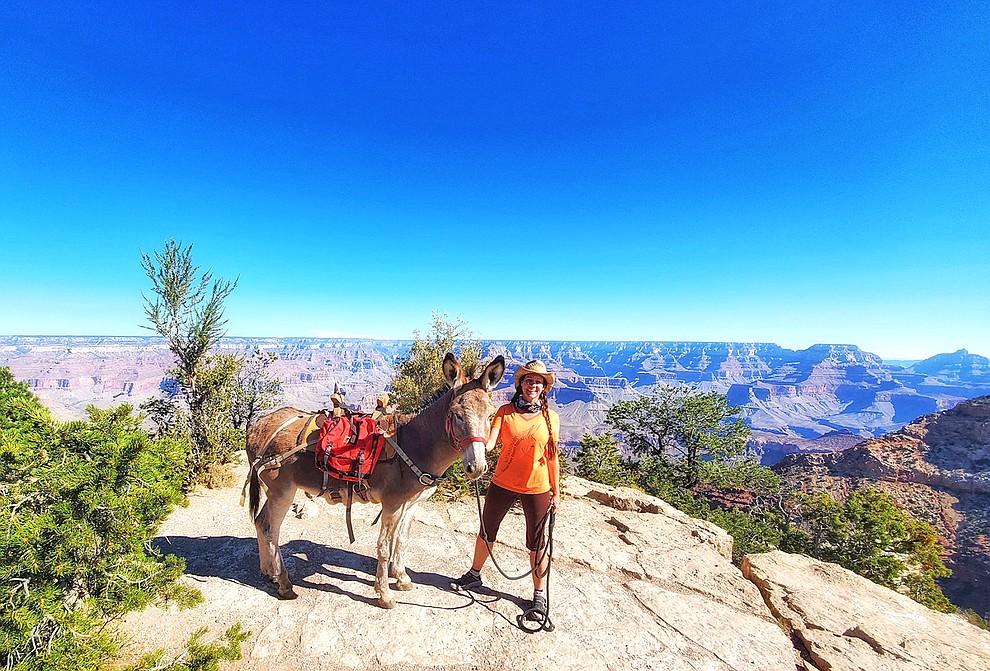 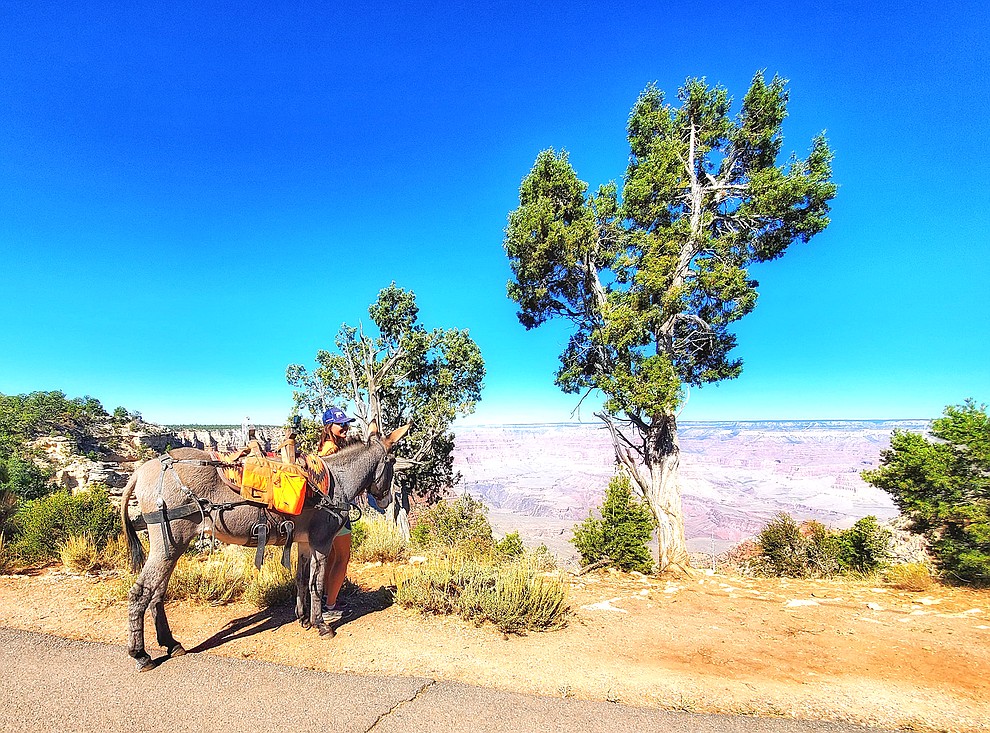 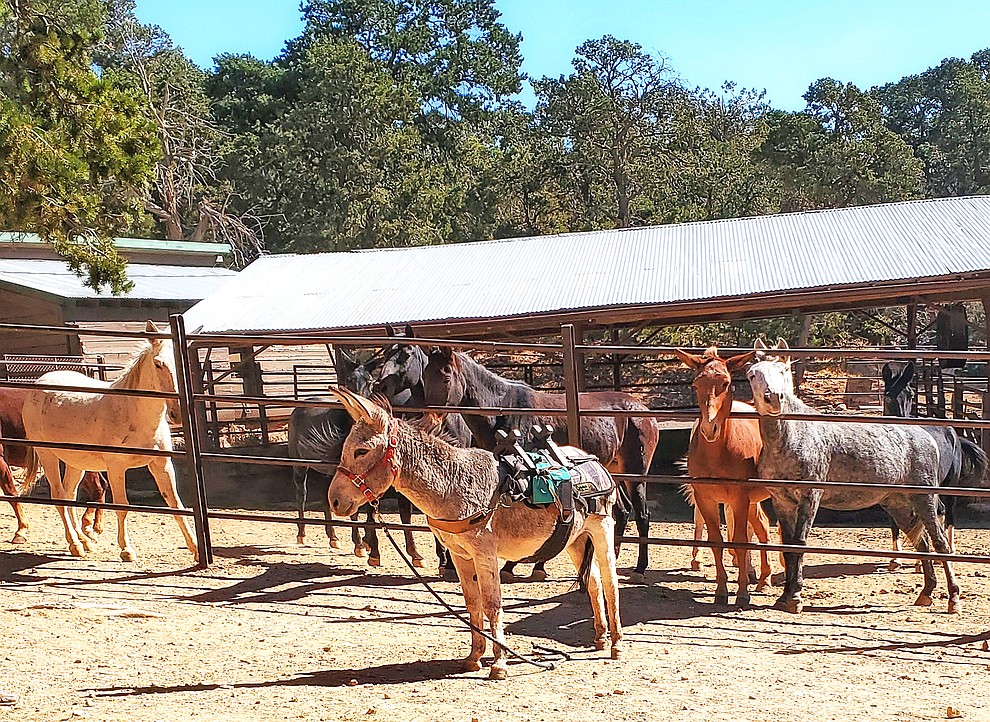 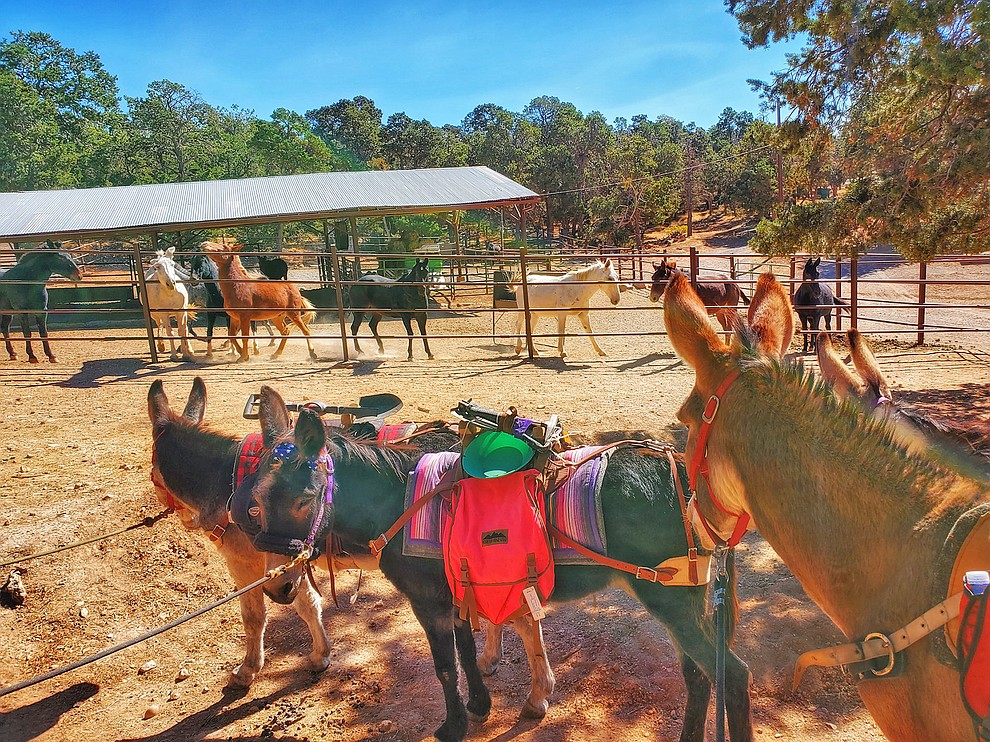 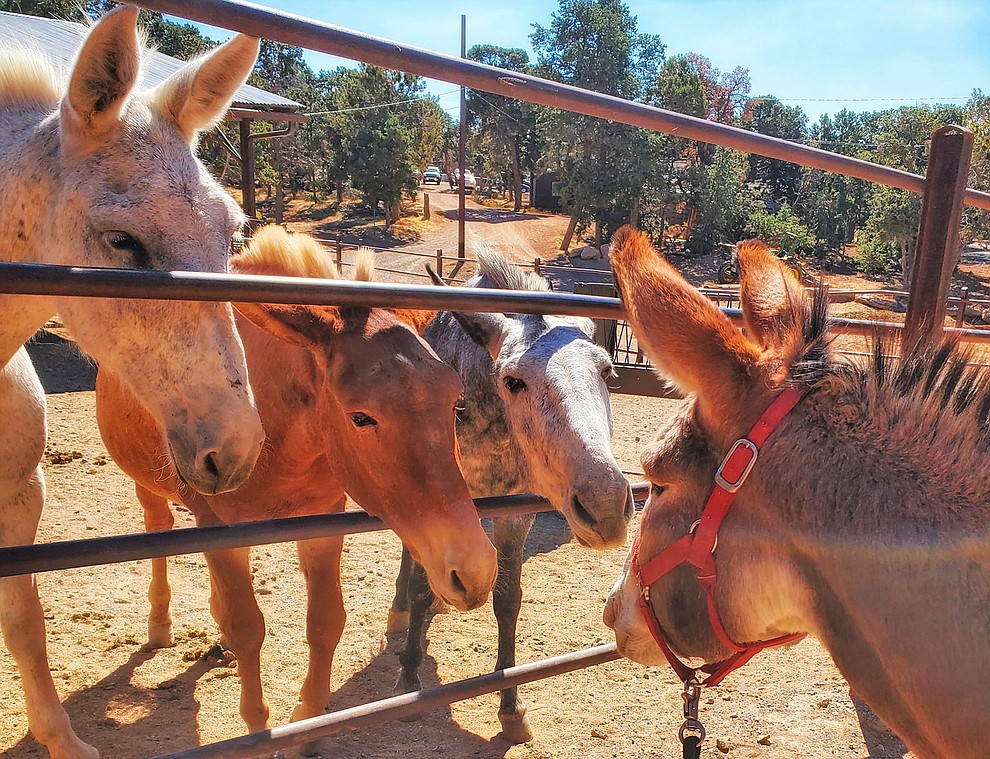 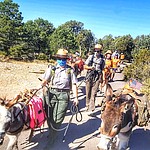 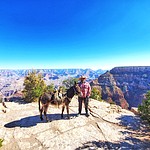 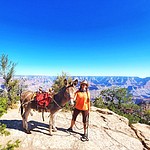 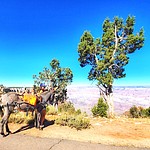 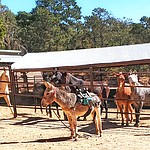 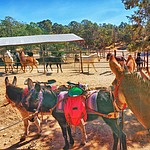 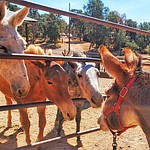 For the run, Oates and Hensel were paired with two miniature burros named Pearl and Winkie. Oates said he was surprised by how fast the burros were, even the small ones.

Hensel said they had a lot of inquisitive visitors who enjoyed seeing and interacting with the burros.

“There was a lot of questions about the difference between burros and mules, we talked a lot with visitors about what these racing burros and pack animals are doing as well as what our mules are doing and what their jobs are with people,” Hensel said. “A lot of little kids were super excited to see them, especially the smaller donkeys with us.”

According to Brad, burro racing is not new to the Southwest.

“Burro racing has been in California before, it has also been in Arizona before — our sport is not new to these areas,” he said.

Brad and Amber are hoping to continue the tradition of burro racing and rejuvenate it in Arizona. Holding races, like the one they completed in Tombstone could be the first of many, they said.

“What we’re doing is setting it up to not fail,” Brad said. “We are giving these (towns) the keys to the kingdom and explaining to them how they can last 72 years like we have and hopefully they take the reins and ride off into the sunset and really make a go of it.”

While Brad and Amber work on bringing burro racing back to Arizona, Oates and Hensel are brainstorming on how to bring burros back to the Grand Canyon.

“I think we really want to bring the burros down into the Canyon, because that’s typically where Kate and I work — at Phantom Ranch or Indian Garden,” Oates said. “It would be cool to introduce the campers to burros down here since not a lot of them see burros.”

Hensel said she could see burros being a useful asset to rangers on the rim or even having burro racing in nearby communities.

“I could definitely see trying to get burros back — maybe like what we did this time, back to the rim or maybe surrounding area as a race. We couldn’t do it in the Canyon because of permitting issues, but I could see burro history coming back to the Grand Canyon area as well,” she said.

More information about pack burro racing is available at www.packburroracing.com and on Facebook at Pack Burro Racing.