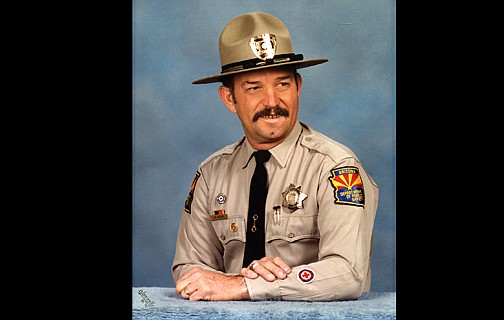 Gary was a beloved husband, father, friend and colleague. He worked for Maricopa Country Sheriff’s Department for two and a half years, then worked for twenty plus years for the Arizona Highway Patrol (Department of Public Safety-DPS) from which he retired in 1990. He went on to be elected three times to the Bench as the Presiding Limited Jurisdiction Justice (Justice of the Peace) in Bullhead City, Arizona. At retirement in 2002 as Justice of the Peace, he and his wife moved to Williams, Arizona where they lived for thirteen years before moving to Flagstaff, Arizona.

Gary belonged to the Catholic Knights of Columbus as a Fourth Degree Knight, the Kiwanis Club, and was Police Officer of the Year (four times), Counselor at the DPS Academy, DPS Firearms Instructor, DPS Defensive Driving Instructor, and a member of the Arizona Judicial Conduct Board. He was also active in the Catholic Church in Bullhead City and Williams, Arizona.

He is survived by his wife of fifty-six years, three sons, five grandchildren and three brothers.

Gary will be greatly missed by friends and family. Condolences can be offered to the family at norvelowensmortuary.com.