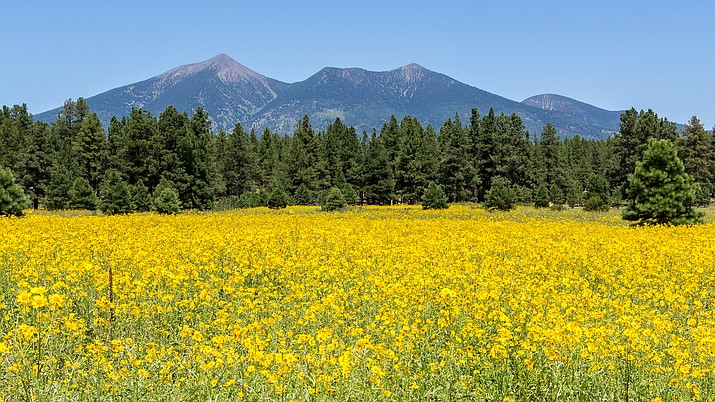 Flagstaff, Arizona is located in northern Arizona. In 2018, its recorded population was 73,964. (Photo/Adobe stock)

FLAGSTAFF, Ariz. — The deadline to choose a new name for Agassiz Street in Flagstaff is Nov. 3 at 5 p.m.

At the July 16, city council meeting, the Flagstaff City Council directed its staff to begin the process of renaming Agassiz Street because of Louis Agassiz’s, who was a Swiss-born American biologist, history of racism.

In August and September of 2020, city staff held virtual town hall meetings to collect suggestions for a new street name from the public,” according to eh city’s website. “After the new street name suggestions were collected, each suggestion was vetted by Emergency Services, the Postal Service, the city of Flagstaff and Coconino County to ensure that it could be implemented safely.”

The following descriptions are taken from the survey on the city’s website.

Corn Pollen Way: The name honors the diverse Indigenous peoples and nations who have lived here on this land since time immemorial. Corn Pollen is a sacred element used in many Indigenous healing ceremonies in this region to restore harmony among people and other-than-people beings who co-exist on this earth.

Code Talker Way: In honor of the Navajo Code Talkers in WWII.

Soto Drive: The street would be named in honor of Marcelino Soto and his contributions to countless community members that called Flagstaff home. As an immigrant, Marcelino sought to create wealth from his hard work starting as a shepherd and working to become a ranch owner and land developer.

Flagstaff Place: No rationale given.

Pluto Place: Pluto is a well-known name that has an established connection with Flagstaff. It Is easy to spell and say and brings up positive feelings and pride!

Annie Wauneka Way: Annie Wauneka (1910-1997) pioneered healthcare and education initiatives on the Navajo Nation. She was greatly affected by the 1918 influenza outbreak and at the age of 8 she survived and helped to care for those who were ill. She dedicated her life to improving healthcare for the Navajo Nation. She was the first Native American to receive the Presidential Medal of Freedom in 1963 and was inducted into the National Women's Hall of Fame in 2000.

Southside Way: When I heard that Agassiz street would finally be renamed, I immediately thought this would be a great opportunity to rename the street in honor of someone that Agassiz considered inferior.

Unify Pl: Time for unity and no racism.

Sheepherder Way: The name change should reflect an awareness and appreciation of the people who were here throughout history and stand in direct contradiction to Agassiz’ beliefs. In an effort to recognize the indigenous peoples of the area (Navajo, Hopi), while keeping the street name easy to remember, Sheepherder reflects the traditional and current practices of many Navajo and Hopi.

Avery Way: Nathan Avery was a physician in Flagstaff that passed away several years ago from an accident at Lake Powell. He grew up in Flagstaff, and was a neurosurgeon here. He was highly respected.

Annie Watkins Lane: Annie Watkins was the first African American teacher hired by Flagstaff Unified School District after desegregation in 1956. She had a more than 30 year teaching career in Flagstaff. Annie was the granddaughter of freed slaves and was an active member of the Flagstaff Southside Community

Colonel Arman Lane: Colonel Peterson grew up in Flagstaff, was president of his high school his senior year and was elected two times as president of now NAU. Ice Age Way: No rationale given.

W C Riles Drive: Wilson C. Riles was principal of the Paul Laurence Dunbar School during the 1940s and early 1950s. A graduate of Arizona State Teachers College (Northern Arizona University), he was also the president of the NAACP and a radio talk show host during his years in Flagstaff.

Goldencrest Way: Based on what I can see from Google Street View, there is a stand of oak trees at the crest, where the street meets Elm Street. During fall, I suspect these oaks provide a golden crest to the street, (soon to be) formerly known as Agassiz.

Information or to take the survey is available at the following website: https://www.flagstaff.az.gov/3284/Flagstaff-Community-Forum pd_url=https%3A%2F%2Fwww.opentownhall.com%2Fportals%2F227%2FIssue_9813#peak_democracy.