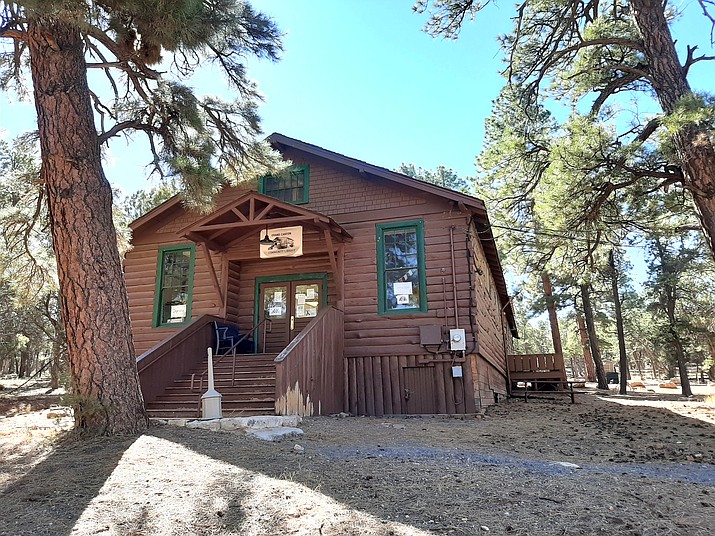 On Oct. 12, the Grand Canyon Community Library reopened for limited services, including borrowing materials and the use of public computers. (Abigail Kessler/WGCN)

GRAND CANYON, Ariz. — After months of being shut down because of the pandemic, the Grand Canyon Community Library has reopened its doors.

Starting Oct. 12, community members have been able to go inside the library to use the computers and browse the collection. Additional safety measures are in place — masks are required, there is limited occupancy and materials are sanitized.

Library supervisor Daniel Bell is excited about the reopening and said the community is, too.

“Several people in the last couple weeks have mentioned being glad the library’s here,” he said. “[They say] it makes the community nicer for us.”

Even while closed, the library has been performing limited operations by allowing residents to request books and access information remotely. Patrons have also had access to online resources through programs such as Libby and OverDrive. These services will continue as the library reopens, in the hopes of continuing to aid those who are trying to isolate as much as possible.

Bell said that he has received support from the community and business has been steady, if not exactly booming.

“Given [the size of the population] and the fact that everyone knew that the library was closed...It’s been steady, but it hasn’t been overly busy. It’s been quiet on that front. The people that are using the library are very appreciative of it, though,” he said.

Bell said while the library was closed he was able to catch up on the backlog of tasks that usually can’t be prioritized.

“In every library, in every archive, there’s always a little bit of work that gets pushed off the side,” he said. “The biggest thing we’ve actually been doing is actually a lot of re-evaluating … and updating the collection.”

Along with a team in Flagstaff, Bell has been working to catalogue the collection of materials in the library. He inputs the information and the catalogers work to make sure everything is correct in the system. They were able to do this digitally, which Bell said was “much, much faster” than having to ship items between locations.

“It’s been a real positive thing,” he said. “We’re still in the middle of that project. There’s still quite a bit to go, but we’ve actually also done quite a bit.”

While doing so, he’s also trying to think about ways the collection might be developed to better serve the community’s needs. This includes things like updating to newer editions of travel guides and analyzing the frequency with which different materials are borrowed.

“You want to keep things vibrant and circulating is the simplest way to put it,” he said.

Community feedback will be a large factor in developing the collection, as well as the area’s specific needs.

“[Determining the priorities for the library is] one of the things I need a bit more help from the community,” Bell said. “In the sense of what do you want, what do you need...a few people are coming in and doing curbside holds and I’m making sure I’m asking that question.”

Bell said many patrons use library resources as a source of entertainment, especially since there aren’t options like a movie theatre nearby and internet access is often limited.

Along with that, Bell mentioned that the library had received funding to improve the wifi in the building. This is one of the services the library has provided during the shutdown, with people using the space around the building to access the internet. Sometime soon, the wifi will be stronger by the library — Bell said it will even be accessible from the back parking lot.

The library also held a book sale in Tusayan last week, in lieu of an annual event with the Flagstaff library.

When asked about hopes for the library, Bell said the library is there to serve the community.