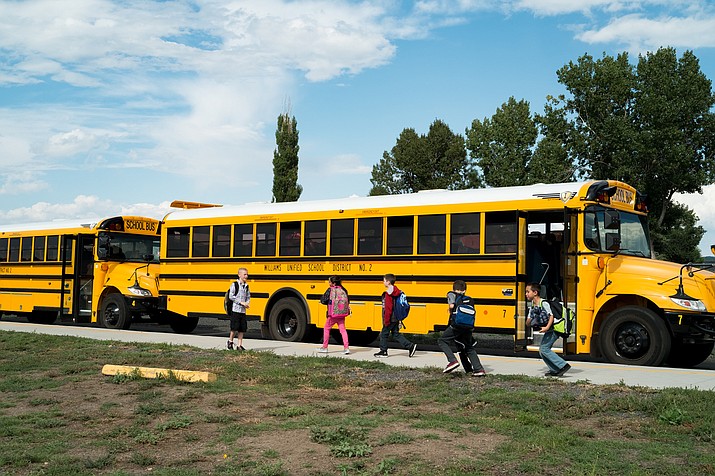 WILLIAMS, Ariz. – Several children received minor injuries and a bus driver has been arrested after a Williams Unified School District (WUSD) school bus went off the roadway the morning of Oct. 19.

Coconino County Sheriff’s Office (CCSO) deputies responded to Hoctor Road and Buena Vista Trail, in the Red Lake area north of Williams, for a report of a school bus that left the roadway and went into a ditch. The bus was picking up students before school and 16 elementary age children were on the bus at the time of the collision, CCSO said in a statement.

Minor injuries were sustained by several of the children on the bus, two of whom were transported by Lifeline Medical ground transport to Flagstaff Medical Center for evaluation.

The driver of the bus, Charles Hoag, 65, was arrested by deputies for suspicion of impairment at the time of the accident. However, family members of the driver stated that Hoag is currently at Flagstaff Medical Center where he is undergoing medical evaluation for a possible stroke.

CCSO said blood toxicology results are still being processed. The incident is currently under investigation by the Sheriff’s Office. No further information is available at this time.

WUSD Superintendent Rick Honsinger released a statement advising the community that the school was aware of the situation and awaiting results from the toxicology tests.

"We have been in contact with all parents who had children on the bus," Honsinger said. "There was some intense bouncing around a few of the students on board were injured. The driver stopped immediately and called 911."

Honsinger asked parents to be patient until the investigation is complete.

"I can assure you that the driver will not be driving for the school until this is all cleared up, which might take awhile," he said. "This is also not a time to jump to conclusions. We will let law enforcement and the medical experts do their work and make decisions when we know the facts."