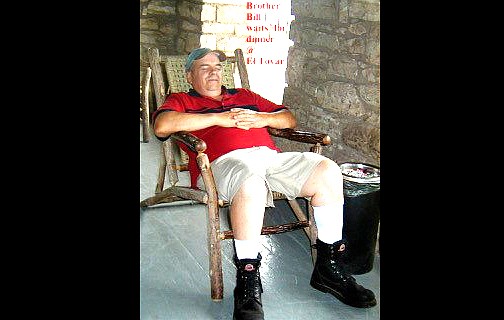 William “Billy” Lewis passed away in the early morning on Sunday, October 4, 2020 after not recovering from emergency heart surgery in Phoenix, Arizona.

Billy was 69 years old and had recently retired. He leaves behind many friends and neighbors near the Grand Canyon.

In the mid 1970s, Billy left his native town, Hudson, Ohio to see the USA in a van. He got as far as the Grand Canyon and fell in love with it. He hiked most of the trails and found a job as a porter at the beautiful El Tovar Hotel right on the South Rim. Soon, he became a breakfast cook for the Harvey Company and later, Xanterra. For over 45 years, he was assigned to cook in most of the hotel kitchens in Grand Canyon National Park. When his sister and her husband visited in 2006, they all dined at the El Tovar. We were surprised to learn it was the first time he had ever eaten there in the dining room! And the dinner was delicious.

Born on August 25, 1951, near Akron, he was part of a large, happy family who enjoy traveling. He and his sisters hiked many a wooded path together and explored glaciated caves and loved to swim.

We were sure we were related somehow to Meriwether Lewis, who, along with William Clark and several others, including native woman, Sacagawea, found their way through to the Pacific Ocean. Billy could have told you all about that American history saga because he was a voracious reader. Mom and Dad teased that he had memorized our entire set of the World Book Encyclopedia.

Besides his fellow restaurant folks and dear neighbors in Grand Canyon, Arizona, he leaves behind his older sister, Bonnie Lewis Smith (Don), his little sister, Lynn Lewis Oakes (Jim), sisters-in- law Mary and Linda, many nephews and nieces, including greats and great-greats.

We will miss his many illustrated letters detailing his unique descriptions of life in northern Arizona.