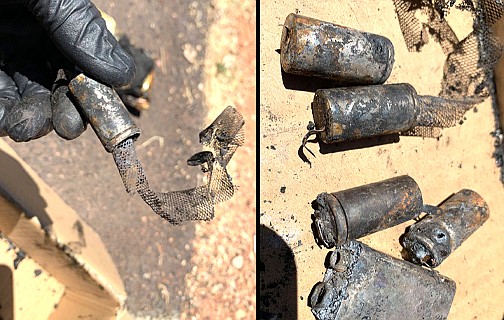 A spare AED battery likely caused a fire that resulted in extensive damage to the interior of a vehicle. (Photo/NPS)

Special to the Williams-Grand Canyon News

Lithium-ion batteries are incredibly common, and can be found in laptops, cell phones, iPods, electronic toys, and even electric cars. They’re so common because, for their size, they’re some of the most energetic rechargeable batteries available.

However, under the right circumstances, these batteries can overheat, potentially causing burns, an explosion, or a fire. Because most lithium-ion batteries contain a flammable electrolyte with a very high energy density, they are susceptible to thermal runaway, a destructive chain reaction that results from overheating after excessive use. The stored energy is then released in the form of a fire. Fortunately, it’s not very common — just two or three batteries per million have a problem.

Follow these simple safety guidelines to reduce the chance of your batteries overheating:

Batteries are extremely sensitive to high temperatures. Don’t expose your GPS or other portable electronics to the hot sun, like the dashboard of your car.

Lithium-ion batteries are delicate. If there is the possibility of battery damage, such as if you’ve dropped your cell phone, it is a good idea to have the battery inspected by a qualified person.

Ensure that your computers have air flow around and underneath the unit, so they remain cooler during operation. Do not use your computer on top of blankets or a bed.

Batteries increase in temperature during recharging, which could cause them to overheat. Never leave your portable electronics plugged in when you’re not at home.

For readers who are now worrying about their electric car, you can breathe a sigh of relief. The lithium-ion batteries used in electric cars are less likely to catch fire due to numerous safety precautions, such as cooling and automatic shutdown systems. Refer to your car owner’s manual for more information about the battery.

According to the National Park Service, two fires likely caused by batteries, occurred in national parks this summer. One fire was caused by a battery in an AED inside of a park vehicle.