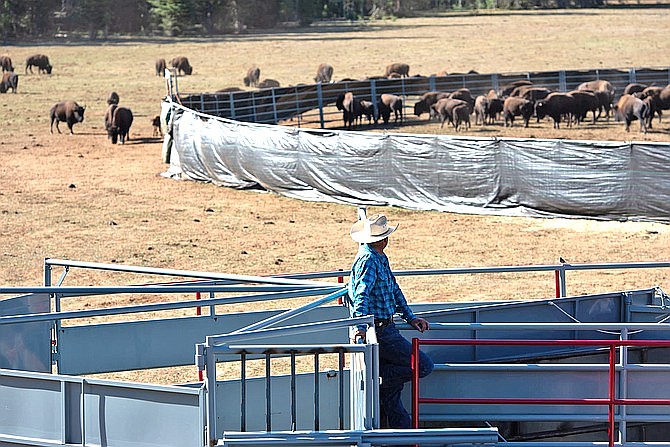 GRAND CANYON, Ariz. — The Arizona Game and Fish Commission (AZGFD) and the National Park Service (NPS) entered into an agreement Sept. 25, to reduce the number of bison to fewer than 200 on the North Rim of Grand Canyon National Park.

“Reducing the herd size to under 200 bison will protect the ecosystem, park resources and values,” the park stated.

In a concerted effort to disrupt the “refuge effect” that allows the bison herd to grow where there is no pressure on them, the agreement includes a number of tools for herd reduction including live capture and translocations, hazing and lethal removal by skilled volunteers.

Given the current distribution, abundance, density and the expected growth of this herd, the public and park service is concerned about increased impacts on park resources such as water, vegetation, soils, archaeological sites and values such as visitor experience and wilderness character, according to the park.

“I am pleased with the working relationship we have developed with Arizona Game and Fish Department and the commitment of staff from both agencies. This agreement, and the management of the North Rim bison herd, is important to the greater goal of responsible management of park resources and bison conservation,” said Grand Canyon National Park Service Superintendent Ed Keable.

Park biologists, working with AZGFD staff, began piloting live capture and removal in 2019. In the two seasons of the program, 88 animals have been captured and relocated to five American Indian Tribes through an agreement with the Inter-Tribal Buffalo Council. These animals will augment existing herds managed by these tribes.

In the agreement, staff from AZGFD and Grand Canyon National Park will work together on lethal removal protocols. The earliest that skilled volunteers could likely be utilized is fall of 2021. The timing of and number of bison to be removed will be identified annually through an NPS operating plan. AZGFD will assist NPS with selection of qualified volunteers through a random selection process. Selected volunteers will go through additional vetting by NPS, including a background check and a firearms proficiency test. There will be no fee for applying or participating.

“Selected skilled volunteers will be able to take up to a single bison including head, hide and meat in exchange for removing the carcass from the field. The Game and Fish Department will provide the volunteer with the necessary permit to possess and transport the carcass from Grand Canyon National Park,” said Arizona Game and Fish Commission Chairman Kurt Davis. “There will be no waste of game meat, and no waste of tax dollars to contract for paid sharpshooters.”

Biologists estimated that the bison herd, which initially numbered about 100 when brought to the House Rock Wildlife Area in the early 1900s, had grown to between 400 and 600 bison by 2014. Though the bison roam the Kaibab Plateau, they spend most of their time on the north rim of Grand Canyon National Park. It is estimated the herd could grow to nearly 800 in the next three years, and as high as 1,500 within the next 10 years, without further management actions to control the size of the herd.

“We’ve made a lot of progress, and we appreciate the commitment by the Department of Interior, the National Park Service, Grand Canyon National Park, and Game and Fish staff to work together on a process to achieve necessary herd reduction,” Davis said.

Individuals interested in participating are asked not to call NPS or AZGFD. There will be an announcement when volunteers will be recruited in 2021.

Herd reduction activities are conducted under a 2017 Environmental Assessment conducted by NPS and supported by the State of Arizona and the US Forest Service.