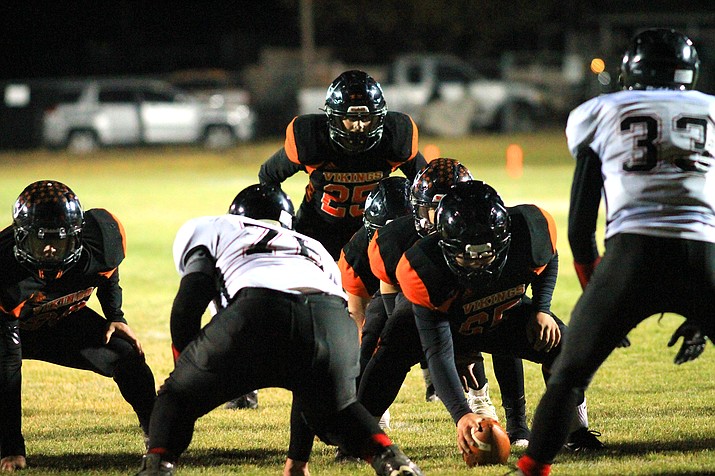 The Vikings return to the 1A State Championship game Nov. 28 against Mogollon. (Wendy Howell/WGCN)

WILLIAMS, Ariz. — The Williams Vikings are set to return to the 1A State Championships after beating Superior 44-26 last weekend in Phoenix.

A stellar fourth quarter scoring run pushed the Vikings past the Panthers to secure the semifinal win Nov. 21.

Drew Logan led the team with four touchdowns, with Jesse Sagor and Black Smith bringing in a touchdown apiece.

Logan finished the game with 23 carries for 236 yards. Sagor carried the ball nine times for 39 yards, and Smith had six carries for 33 yards.

The Vikings managed to stifle the Panthers, although quarterback Matthew Cruz finished 33 of 51 passing attempts for 303 yards. Senior Adam Navarrette carried the ball 14 times for 89 yards in his final game.

The Mustangs are ranked first in the 1A Conference. They finished the regular season undefeated with a 7-0 record. They beat every opponent by 38 or more points over the season.

The Vikings are ranked second with a 6-1 record this season.

This will be the fourth time in five years the Vikings have played in the title game. The Vikings won in 2017 and 2019.