On the rise: City of Williams to raise sanitation rates 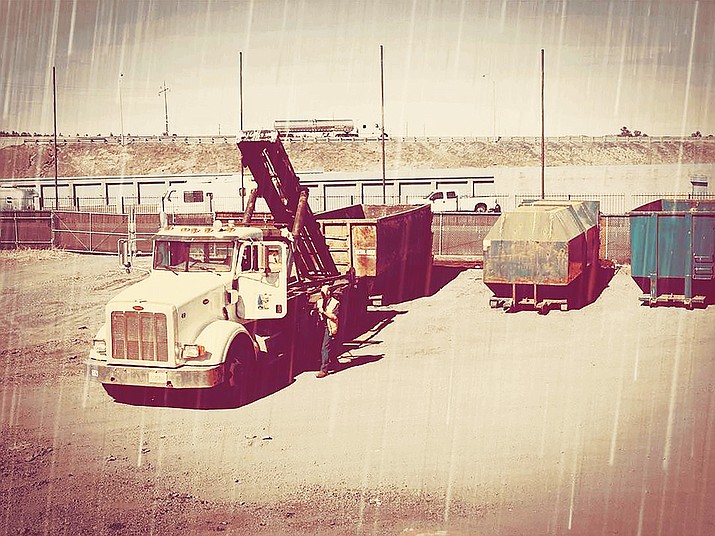 The Williams Sanitation Department is proposing a new fee structure for residential and commercial pick-up, and transfer station use. (Loretta McKenney/WGCN)

WILLIAMS, Ariz. — Due to higher recycling fees and the loss of county support, rates for sanitation service are set to increase in Williams early next year.

A committee of Williams City Council members presented the results of an analysis of the city’s Sanitation Department rate structure to the council Nov. 12. The committee revealed the need to raise the rates to keep the department financially secure amid increased tipping fees and loss of county support.

“Nobody likes to raise rates,” said Williams City Councilman Don Dent. “Some people say ‘I will never raise rates,’ but to them I want to ask, ‘How are you going to pay the costs?’”

Dent said the city has not seen a sanitation rate increase in 16 years, and costs for maintenance, employees and equipment have also gone up.

Dent said the committee not only evaluated the city’s rate structure when compared to costs, but also considered rates of several nearby communities.

Dumping fees at the transfer station would also change.

The rates vary by weight, but for 100 pounds, residents and non-residents currently pay $6.00.

The greatest increase will be for non-residential dumping, as Coconino County has informed the city that they will no longer financially contribute to the city’s transfer station. County residents will absorb most of those costs with a nearly 300 percent increase in fees.

“We want non-residential people to know why they are seeing that increase – it’s because the county has literally gone from supporting our Sanitation Department with about $250,000 per year to $0 next year,” Dent said.

With the new rate increase, residents will now pay $7.20, and non-residents $18.

In addition to the loss of county support, the city received notice of a fee increase from Waste Management for recycling.

“As you are aware, actions taken by the Chinese government have resulted in an extraordinary and unprecedented disruption in the recycling industry,” said Clark Landrum, Waste Management public sector solutions manager in a letter to the city. “These actions include banning certain types of recyclables, restricting import permits and cutting off most shipments from the United States.”

Waste Management is now charging the city $47.79 per ton for recyclables, an 81.9 percent increase over the previous fee of $26.28 per ton.

Landrum said the amount reflects an increase of labor costs to meet strict contamination standards and an increase in transportation costs.

The Williams Sanitation Department employs six full-time employees that pick up trash and manage the transfer station and Lake Ellen burn site. The city has 198 commercial and 1,334 residential trash accounts. Recycle pickup is no longer offered, but the city continues the service for those who bring their recycle to the transfer station.

“Some residents don’t get the recycling concept so they end up contamination our loads,” the committee said in a memo to the council. “The city is charged a higher dump fee for contaminated recycled materials.”

The city also plans to implement better control measures at the green waste burn area to ensure proper payment for services, and is planning to tighten the fee collection system at the transfer station.

“We need to ensure we are getting paid for everything that goes in there,” Dent said.

As a result of the fee increases, the Sanitation Department is planning to offer more dump days at the burn site and continue free clean-up days at the transfer station.

With the approval of the resolution, the committee will move forward in the approval process. The city will advertise the new rates for 60 days and will have a public hearing in January.