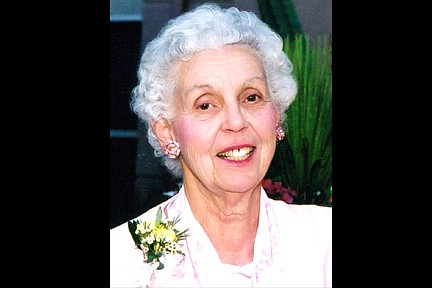 Betty Jean Christman (neè Walker) died peacefully on Monday, November 16, 2020 in Flagstaff at the age of 99 surrounded by family.

Betty was born on March 12, 1921 to Walter and Lucile Walker in Cherryville, Kansas. She grew up and attended school in Topeka, where she met Warren “Chris” Christman. They married in August 1942. As a young wife and mother, she accompanied Warren across the country, who worked as a lineman on the Santa Fe Railroad. Together they raised four boys and a girl in an outfitted live-in rail car before settling permanently in Williams in 1954. Betty maintained her Kansas roots by visiting during the summer with the kids to help on the family farm, always traveling by train.

Betty was active in several community organizations including the Williams Volunteer Women, the Elks Club, Red Hat Society, and the Community Methodist Church. She was also a team member on the local ‘Cream of the Crop’ bowling league for many years. On her off time, she enjoyed baking, ceramics, crocheting, and gardening. She especially relished any time with friends and family at gatherings, holidays, and picnics. Her greatest joy was being surrounded by her grandchildren and great-grandchildren.

Above all else, Betty was incredibly kind, thoughtful, and generous. She was a caring and devoted friend, often dropping by to say hello or checking on those who were ill. She ensured you never left her dinner table without being completely stuffed and always kept her cookie jar full for visits from her grandkids. She loved unconditionally and gave herself fully to her family.

Betty was preceded in death by her son Jerry, killed during the Vietnam War, her husband Warren, her sister Dorothy, her brother Thurman and her son-in-law John Augenstein. She is survived by four of her children: Patricia, Michael, Craig (Cindy), and James (Linda), as well as her eight grandchildren and eight great-grandchildren. She was loved in life and will be missed dearly in death.

A private memorial with family will be held at a later date.