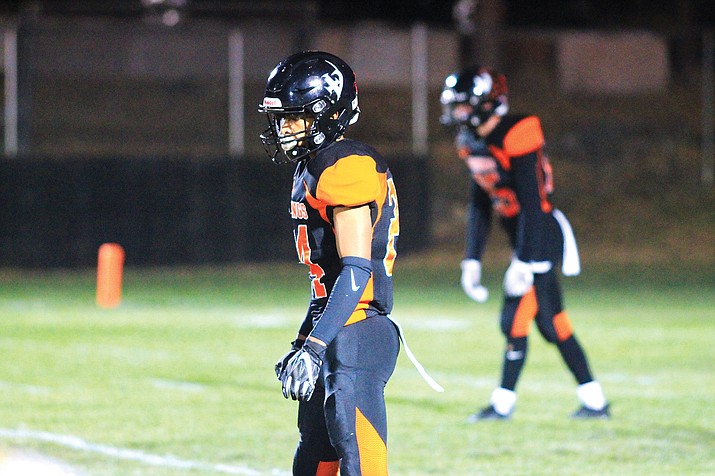 Jason Sagor lines up during an earlier season game with Mogollon. Sagor scored one touchdown in the semifinal game with St. David. The Vikings next face Superior in the semifinals Nov. 20 at Coronado High School. (Wendy Howell/WGCN)

WILLIAMS, Ariz. — The Williams Vikings (4-1) football team cruised past St. David, 38-20, in the quarterfinals of the 1A State football tournament Nov. 13.

The Vikings and Tigers sprung into action early as both teams recorded two touchdowns to leave the first quarter tied at 14.

The second quarter was again close, with the teams scoring a touchdown apiece as the teams headed to the lockerroom tied at 20.

After half-time, the Vikings plunged ahead scoring one touchdown in the third quarter and two in the fourth to take the win.

The Vikings, who are ranked second in the 1A conference behind Mogollon (6-0), will face Superior (5-0) in a semifinal game Nov. 20.

Mogollon (5-1) is favored to beat Bagdad in the other state semifinal game Nov. 21. The winner of that game will play the winner of the Williams-Superior game.