More wind turbines on the horizon north of Williams? 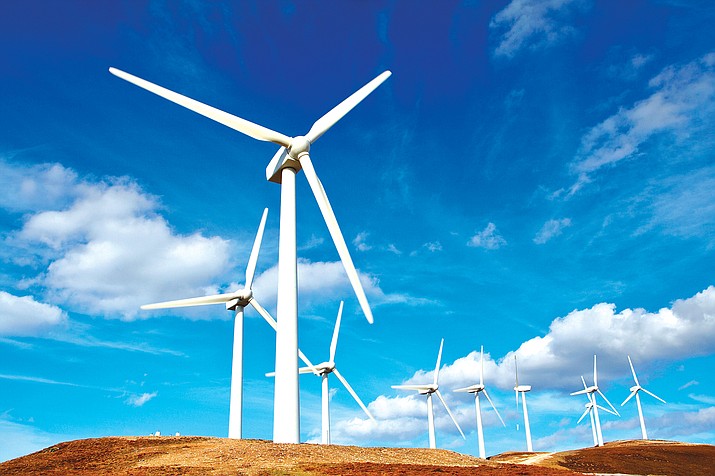 A Conditional Use Permit that would allow six meteorological monitoring towers (MET) northwest of Williams has been submitted to Coconino County for authorization. MET towers are typically installed prior to placement of wind turbines similar to the ones pictured. (Photo/Adobe Stock)

VALLE, Ariz. — Grand Canyon visitors traveling north on State Route 64 are often surprised to see a sea of wind turbines — 62 in all — that dot the landscape 13 miles outside of Williams.

The Perrin Ranch Wind Farm can power about 25,000 Arizona homes, according to Arizona Public Service, the company that buys the power. On average, the wind farm operates at 30 percent capacity-enough to power about 8,000 homes.

The wind farm isn’t without controversy, though.

The 298-foot-tall turbines, which were installed in 2012, are spread over 20,000 acres and many residents who live in the Junipine Estates and Howard Mesa subdivisions are unhappy about the placement.

Now, a new wind turbine project could be on the horizon.

Pattern Renewables Development Company has submitted a Conditional Use Permit application to Coconino County to allow the construction and operation of six meteorological monitoring towers (MET towers) on two parcels of the Babbitt Ranches located 25 miles west of Valle, and 20 miles north of Ash Fork.

MET towers are typically used to observe and record meteorological conditions on a site prior to an electrical generation project.

“Pattern Development intends to construct and operate the MET towers to observe and record meteorological conditions on the site in order inform a future proposed renewable electrical generation project,” the company said in its application.

Although the company doesn’t specifically outline wind turbines as the proposed use, the company is a leading renewable energy developer in the United States, focusing on wind, solar, transmission and energy storage projects.

The property Pattern Renewables is considering for the MET towers lies in a checkerboard pattern between Arizona State Trust land and private parcels.

The Met towers will consist of a monopole approximately 197 feet tall, made of galvanized steel.

Each structure is designed to minimize visual intrusion, according to the company, and will occupy approximately two acres when including attached guy-wires.

Installation of each MET tower is expected to take one to two days, and the company proposes operating the towers for up to three years.

Once operational, the MET towers will be operated remotely, with a site visit every six months by one to two project personnel.

Access to the MET towers will be from the Willaha Road that enters the east side of the ranch from SR 64. Use of existing roads will be used as much as possible.

“Following project completion and the subsequent disassembly and removal of equipment, all disturbed areas would be graded to reasonably match the surrounding native areas, compacted to a similar state as existing native soils and seeded with native vegetation,” the company said.

Babbitt Ranches has a lease agreement with Pattern Renewables and has signed a consent form that was submitted with the application.

The parcels are 12 to 20 miles from the nearest residences in Seligman, Ash Fork and Valle.

However, the company provided notice of the project to some stakeholders on Sept. 1 through informational mailings. The mailings described the project and provided project contact information where stakeholder could provide comments or ask questions. Mailers were sent to those parties with close property, including the Navajo Nation and the Arizona State Lands Department.

The Coconino County Planning and Zoning Commission held a study session about the MET towers Oct. 28. A decision regarding the approval of the MET towers will be Dec. 2.

Comments can be submitted to Principal Planner Bob Short until the hearing, according to Jess McNeely, assistant director and planning manager for Coconino County Community Development.

Pattern Renewables did not respond to written questions from the Williams-Grand Canyon News.