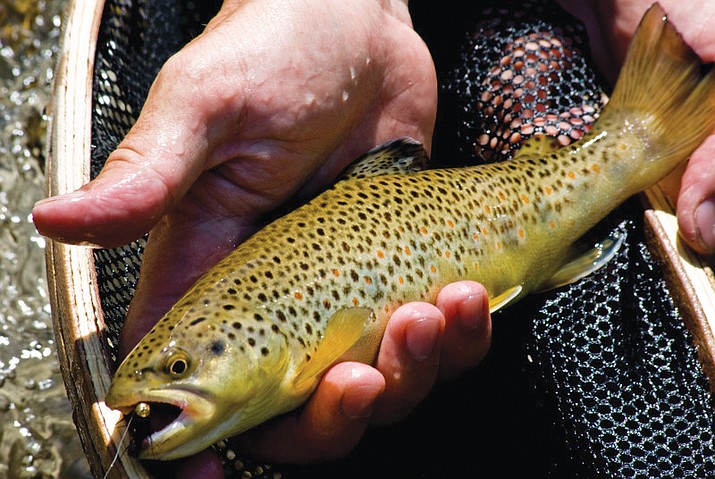 Beginning Nov. 11, licensed anglers will get paid $25 per brown trout over 6 inches caught from the Colorado River, between Glen Canyon Dam and the mouth of the Paria River. (Photo/stock)

MARBLE CANYON, Ariz. — Although highly esteemed by anglers for its elusiveness and tasty meat, the territorial brown trout has become a management nightmare for the National Park Service over the past 10 years, as the voracious fish eats everything, including the endangered humpback chub, and is reproducing at a rapid rate.

Now, Grand Canyon National Park, Glen Canyon National Recreation Area and the Arizona Game and Fish are looking to those devoted anglers for help in reducing the brown trout population by paying them to fish.

Beginning Nov. 11, licensed anglers will get paid $25 per brown trout over 6 inches caught from the Colorado River, between Glen Canyon Dam and the mouth of the Paria River. The program is expected to last three to four years

In 2019, the National Park Service compiled a non-native fish management plan that included all waters between the Glen Canyon Dam, through Lee’s Ferry and into Grand Canyon National Park.

The plan addressed the increase in nonnative fish populations of the green sunfish and the brown trout below Glen Canyon Dam. The plan gave the National Park Service additional tools to prevent, control, minimize or eradicate potentially harmful non-native aquatic species that threaten downstream native species including the endangered humpback chub and razorback sucker, along with the recreational rainbow trout fishery.

The effects of Glen Canyon Dam

The Glen Canyon Dam was built in 1963, which halted the natural flow of the Colorado River through Grand Canyon National Park. Prior to the completion, the temperature of water flowing through the Grand Canyon each year was highly variable, ranging from the icy, spring run-off to the warm, 85-degree summer-heated flows, and provided a home for native fish such as pikeminnows, suckers and chubs. However, once the dam was constructed, water was drawn from the depths of Lake Powell and released through the dam’s penstock intakes at temperatures between 45 and 50 degrees Fahrenheit. The water provided prime conditions for rainbow trout as the water was now colder.

In recent years, the National Park Service has lowered the level of Lake Powell which has increased water temperature to as high as 59 F which has likely led to an increase in the humpback chub and other native fish populations in Grand Canyon. However, these increases in temperature also increase the risk of expanding the distribution and abundance of cool/warm-water nonnative fish like brown trout, green sunfish, smallmouth bass, and walleye which could have a devastating impact on the humpback chub population in Grand Canyon like they have on humpback chub and other native fish populations in the Upper Basin.

The Arizona Game and Fish Department partners with local, state, tribal and federal agencies in management of fish and wildlife in the state. Their mission is to balance public demand for sport fishing with the conservation of native aquatic resources. Hatchery raised rainbow trout were initially stocked in the river beginning in the early 1960s and eventually became self-reproducing. AZGFD experimented with other trout and salmon species, including the brown trout, but discovered rainbow trout were the most suited.

Although believing the rainbow trout were better suited to the area, the brown trout population exploded between 2012 and 2016 below Glen Canyon Dam despite stocking ending around 1990.

In efforts to provide exceptional recreational fishing opportunities, various species of trout and other game fish, like striped, large, and small mouth bass, black crappie, walleye, bluegill sunfish, and channel catfish have been introduced into Lake Powell and the Colorado River.

Unfortunately, these species have been found to out compete weakened endemic species which are often specialists whose specific niche has been destroyed.

Officials zeroed in on the brown trout and determined small populations of the fish that were stocked in Grand Canyon National Park’s cold water tributaries of the Colorado River in the 1920s had expanded into the river and were having a significant effect on native fish species.

How it will work

Licensed fishermen can participate in the incentivized harvesting program and must follow current Arizona Game and Fish Department guidelines for the area.

This includes using barbless hooks and lures, and no live bait.

Limits for rainbow trout still apply, and anglers are encouraged to study the differences between brown trout and rainbow trout. Rainbow trout should be handled carefully and released unharmed once the rainbow trout limit has been reached.

Anglers need to pick up an official data card and a small bag at the Lees Ferry boat ramp, the Lees Ferry fish cleaning station located near the long-term parking area, or at the Navajo Bridge Interpretation Center collection area.

Once a brown trout is collected, the head and entrails will be placed in provided bags along with a data card. Only heads from brown trout 6-inches or greater will be counted.

Harvested fish and data cards should be turned in at the collection station located at the Navajo Bridge Interpretive Center. A freezer is available for depositing the catch.

All brown trout harvested will be tallied at the end of each month. Checks for the rewards will be mailed to the name and address presented on the data card.

The Grand Canyon Conservancy is assisting program managers with the storage of fish heads and the distribution of monthly payments.