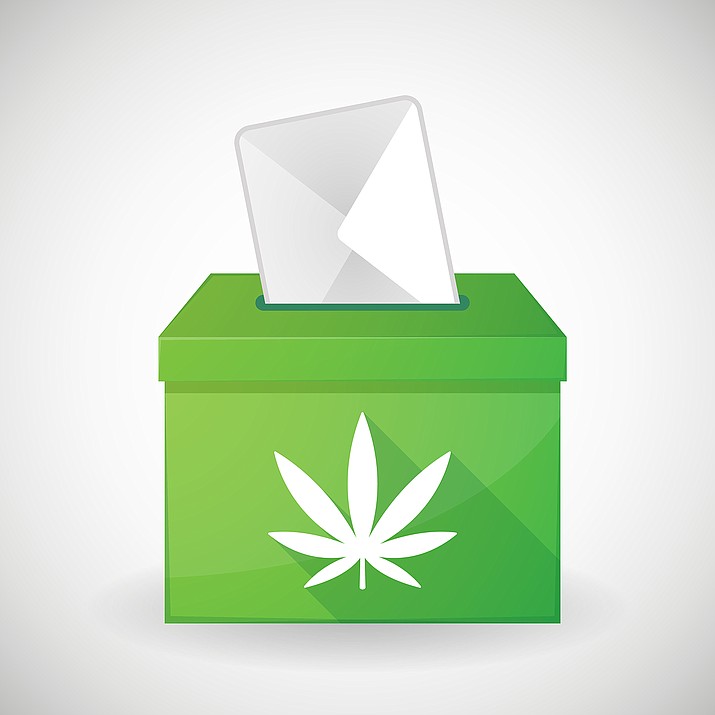 FLAGSTAFF, Ariz. (AP) — Arizona voters on Tuesday decided the state should join others across the nation that have legalized recreational marijuana in a repudiation of the state's Republican leadership. Another ballot measure for a new tax on the wealthy to fund education was too early to call.

"This shows they've been out of step on this issue in two ways in terms of people's opinions about the product itself and the personal use of this product and, secondly, just the need for criminal justice reform in Arizona," said Chad Campbell, chairman of the committee that backed the measure.

Recreational marijuana sales will become legal when election results are certified in about a month.

Retail sales could start in May and people can grow their own plants. People 21 and older can possess up to an ounce (28 grams) of marijuana or a smaller quantity of "concentrates" such as hashish.

Voters in New Jersey also approved recreational marijuana, and South Dakota and Montana had pot legalization measures on their ballots.

The Smart and Safe Arizona Act levies a 16% excise tax on pot. It could bring in an estimated $255 million in new revenue annually when combined with sales tax that goes to state and local governments, according to legislative analysts. The money will fund community colleges, police and fire agencies, transportation projects, and public health and criminal justice programs.

The measure was backed by the legal marijuana industry. Supporters argued it's time to rescind Arizona's punitive penalties on marijuana, ensure quality control through state testing, and decrease crime associated with smuggling and illicit sales.

Opponents have said that legalizing pot will make workplaces less safe, increase teen drug use and fill the state's roads with stoned drivers. They include social conservative groups, the Arizona Chamber of Commerce and Industry and many Republican elected officials, including Ducey.

Lisa James, a spokeswoman for Arizonans for Health and Public Safety, said her group was still evaluating voting data and not ready to concede.

Flagstaff resident Chris Nylen, 50, said her support for the measure evolved as she saw her dog's arthritis and anxiety ease because of CBD pills prescribed by a veterinarian.

"I'm so old school," she said. "I personally don't have a desire for it, but (I'm) seeing the benefits for my dog."

Page resident Adrian Augustine, 40, fears more widespread and legal use of marijuana would lead to social ills like those tied to alcohol abuse on the Navajo Nation where he grew up.

"For recreational use, I don't see it as a good thing," said Augustine, a pawn broker. "Alcohol is already rampant. Marijuana is going to have the same effect, if not worse."

The second Arizona ballot measure, Proposition 208, was too early to call because not enough votes have been counted. It is designed to boost pay for teachers and support staff, fund teacher training and education, and increase career and technical education.

Those taxpayers currently pay a 4.5% rate on money earned above those amounts. The new tax would cost the average taxpayer earning between $500,000 and $1 million an extra $5,459 yearly, analysts said.

The Invest in Education Act is the latest outgrowth from a statewide teacher strike two years ago that highlighted low wages for educators and a slow rebound from budget cuts enacted after the Great Recession. The walkout secured higher wages for teachers, but many education interest groups said it fell short.

Opponents have said Proposition 208 will bring only partial relief for cash-strapped schools and hurt the economy, particularly small businesses that largely pay taxes at the individual level. Business groups have spent millions trying to persuade voters to reject it.

Mike Bright, who lives in Waddell northwest of Phoenix, and his wife home school their eight children. He said he doesn't see a reason to raise taxes for a system that he believes is indoctrinating.

"The best thing we can do — and I know everyone can't do it — is to teach our children ourselves," said the 44-year-old mechanical designer.

Supporters have said it could raise about $940 million a year for schools, although the Legislature's budget analysts estimated it would bring in $827 million a year.

Georgianne Weiss, a 70-year-old early childhood education teacher in Phoenix, voted for it and said she hopes more funding goes directly to school districts that will be accountable for the spending.

"I know I've spent quite a bit of money on my own to put the features I want in my classroom to teach, the tools and things I know my children would be engaged with," Weiss said.

The Legislature has pumped significant cash into schools in recent years, including a 20% percent pay raise over three years that was prompted by the strike.

But schools were never repaid billions they lost in cuts over the past decade and Arizona's teachers remain among the lowest-paid in the nation.