Summer Rec program on hold because of COVID-19 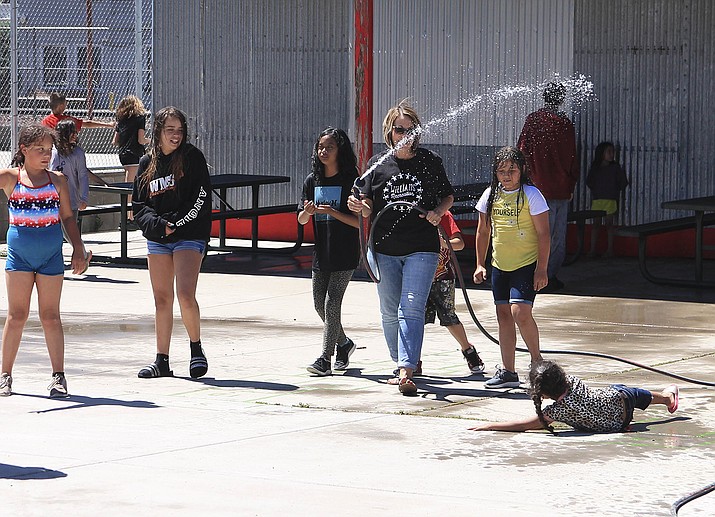 Teacher Patty Jackson sprays kids at the Williams Summer Rec program in 2019. The program is currently on hold as city officials weigh the risks of opening amidst the COVID-19 outbreak. (Loretta McKenney/WGCN)

WILLIAMS, Ariz. — Although the city of Williams has begun reopening with retail stores, restaurants and beauty salons back in business, the Williams City Council has decided to keep the Williams Aquatic Center and Recreation Center closed — for now.

“The biggest problem is we don’t want to throw our kids in a big group of people and have something break out,” said Williams Mayor John Moore.

Moore said the city was being cautious about reopening the recreation center and swimming pool.

“We are waiting to see where things go, probably after Memorial Weekend we will look at it and see where we are at with it,” he said.

Although some communities have begun to reopen facilities such as Boys and Girls Clubs, summer camps and swimming pools following the expiration of Gov. Doug Ducey’s stay-at-home order, others are more hesitant.

“We are going to wait a few more weeks to see what develops,” Moore said.

The coronavirus pandemic has also caused the cancellation of the Williams Little League season. It has also put a stop to most school sports. Typically Williams High School athletes begin preparing for fall football and volleyball during the summer.

Moore said he is hopeful that the recreation center and pool will open soon, and said the city is also discussing the Summer Rec program.

“We need to check the CDC and see if anything changes,” he said. “While we are anxious to get things open and get the community back to normal, we don’t want to do anything that might create problems for our residents — particularly the kids.”

Gov. Doug Ducey said May 20 that one of the state’s goals is to open summer camps, schools and other youth programs as soon as possible.

The city has reopened all other city facilities including the parks, playgrounds, library and City Hall. The city is promoting social distancing and the use of masks.

“We are lifting the 10-person limit in the council chambers, however, we have tried to abide by the six-foot distancing guidelines per the CDC,” said City Manager Chase Waggoner.

Waggoner said the distancing will allow a capacity of 17 people.

The Williams Transfer Station is back to accepting cash payments, and the Williams Police Department building is open, but precautions are being taken.

The department is following CDC guidelines and is allowing fingerprinting for local residents.

“If an individual needs fingerprinted, we are requiring their temperature be taken and the individual must have a mask to wear during the fingerprinting process,” the department said in an email.

The WPD said anyone that appears sick or has a fever of 99 degrees or higher will not be able to be fingerprinted.

Despite the reopening, several organizations have cancelled or postponed summer events in Williams. The Nation of Patriots Tour set for May 23 was cancelled. Other May events cancelled include Jack Fuller Roping and the Youth Foot rodeo.

In July, Habitat for Humanity’s Opry Night has been cancelled.