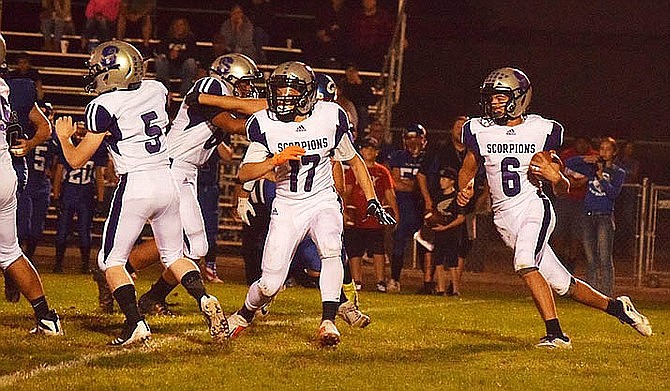 SEDONA - In a move that reflects a number of trends, including plummeting K-12 enrollment, the Sedona-Oak Creek School District Governing Board made a difficult decision at its May 5 teleconference meeting.

The board voted unanimously on May 5 to eliminate football from its 2020-21 junior high and high school programs.

Following a PowerPoint presentation by district athletic director Don Burton, the board decided that with low numbers of players, no coach and a program operating at nearly a $10,000 deficit in 2018-19, along with all the adjustments associated with the COVID-19 pandemic, football is not something the district will offer in 2020.

Much of the focus in Burton’s presentation was on numbers; it simply takes a roster, larger than what the Scorpions have been able to keep suited up, to be competitive and make the football experience worthwhile for everyone involved. These low numbers and injuries are problems that feed on each other, Burton explained.

“The number of injuries increase as the number of participants force the coach to use all players both ways, on offense and defense,” Burton said in the presentation. “When key players are injured, it forces the coach to move players around due to limited numbers. For example, last year, we lost two key players for most of the season.”

The school’s program finished the 2019 season with only 14 players, and six of those players were seniors. The school has petitioned the Arizona Interscholastic Association to move from 11-man football to an 8-man division twice, and was denied both times.

The Scorpions went 2-8 in 2019, and has only won seven games combined over the past four seasons after going 7-3 in 2015. Bob Young, brought in during the spring of 2019 to coach the team, resigned in April after two seasons, so the team is without a coach.

Over the past four years, the Class 2A Scorpions have never begun the year with more than 27 players, and never finished with more than 18. In that span, the high school’s Sept. 1 enrollment has dropped from 444 to 308.

During the fall of 2019, a junior high team was started, but after two lopsided losses, the rest of the games were canceled after more than half the team being declared academically ineligible. Also, no area junior high or middle schools play football, so all trips involving that program would be long-distance.

The Scorpions high school team would have remained in Class 2A this fall, competing in the 2A Verde section with Camp Verde, North Pointe Prep, Scottsdale Christian, Scottsdale Prep and Valley Lutheran.

This figure, Burton said, doesn’t take into account transportation to away games or about $1,500 for field lighting for home games.

As the cost of real estate in the Sedona area has skyrocketed and out-of-state companies buy up land to use for vacation rentals, the district’s enrollment has shrunk. The Sedona-Oak Creek School District student population has been nearly cut in half from a high of 1,438 in 2006 to 764 students as of last fall.

In addition to Sedona becoming more and more focused on the hospitality industry and less on traditional activities such as high school football, Burton said there are cultural trends working against Scorpion football as well.

“The concern is also for the reduced number of students that might consider playing football,” Burton said in his presentation. “Then, there is nationwide concern about concussions from participating in football.”