Out of the past: ATSF Grand Canyon Limited wrecks west of Williams in 1964 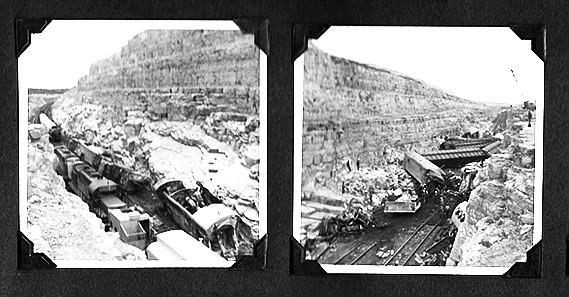 WILLIAMS Ariz. — On April 5, 1964, around 2:30 a.m., a Grand Canyon Limited passenger train hit a rockslide near Double A cut, west of Williams at 87 miles-per-hour, killing three passengers and causing a large derailment, according to an archived Williams-Grand Canyon News story.

The Atchison, Topeka and Santa Fe Railway’s No. 123 train had five diesel engines and 16 cars, and upon impact all the locomotives derailed in addition to a passenger car and ten baggage cars. Double A cut is more than a mile long, and from 50 to 85 feet high. 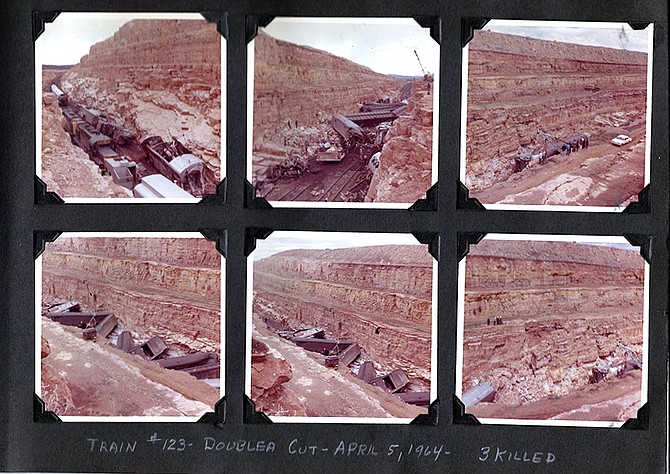 Three people were killed in the 1964 wreck. (Photo/Messimer Family)

The diesel units were carried a few hundred yards down the cut with the derailed cars crisscrossing behind them. The train was made up of express and baggage cars on the head end, and the passenger coaches on the rear.

Magazines, circulars and other contents from the ripped cars were scattered throughout the canyon. The injured were brought by ambulance to the Williams Hospital. The undamaged rear end cars were pulled back to Williams Junction. 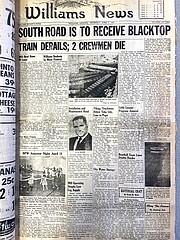 Engineer George H. Crawford, 63, and fireman David M. Loucks, 25, both from Winslow, died at the scene. Baggageman Charles F. Johnston died later at the hospital. Crawford was well known in Williams, Ash Fork, Seligman and Winslow. He was a one-time engineer on the Williams to Grand Canyon run. Johnston had been with the train for 20 years. The ill-fated trip was Louck’s first passenger run.

All passengers continued on their way that afternoon, and passengers from trains stranded in Seligman were brought to Williams to board other trains.

History of the Grand Canyon Limited

The Grand Canyon Limited was put into service June 29, 1929 and was one of several passenger trains of the Santa Fe Railway. It ran a 66-hour stretch between Chicago and Los Angeles, with a branch to Grand Canyon National Park.

In 1901, the Santa Fe Railway completed the 64-mile stretch Grand Canyon run that went from Williams to the South Rim of Grand Canyon National Park. In 1905, the railroad constructed the El Tovar Hotel at Grand Canyon and trains branched from the California-Chicago route to take passengers directly to the park and hotel.

The Grand Canyon Limited had a variety of steam and diesel-powered locomotives over the years. The railroad was known for its passenger trains, and was popular because of the dining cars and stops at the Harvey Houses, including the El Tovar and La Posada Hotel in Winslow.

The original cars were built by Pullman-Standard and consisted of a baggage-dormitory-buffet smoking car, two chair cars (coaches), a dining car, three compartment and drawing-room sleepers and a full open-end observation/parlor car. 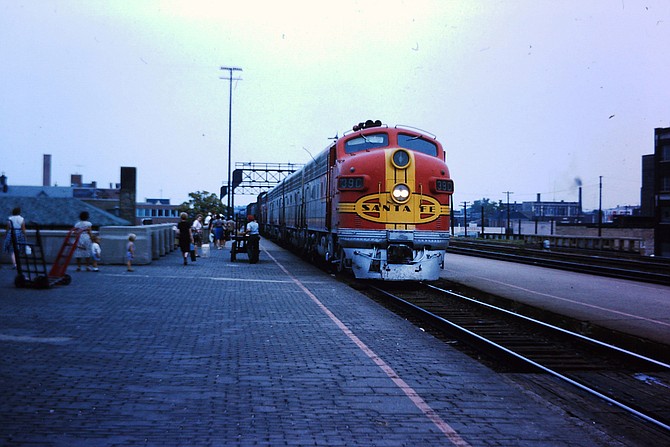 In 1938, the Grand Canyon Limited was rerouted through Amarillo, Texas, and in 1947 the train received its first diesel locomotives and stainless-steel lightweight passenger cars. Because of many long stretches without water, the Santa Fe Railway was one of the first buyers of diesel locomotives for freight service.

The Santa Fe came out with the Super Chief passenger train in 1936, which was the first diesel-powered, all-Pullman sleeping car train in America. As the Super Chief grew in popularity, the Grand Canyon Limited began dropping in numbers.

In 1968, the Grand Canyon Limited was renamed as the railway dropped service to Grand Canyon National Park. In the later years, the train typically used two ALCO PAs, one streamlined baggage car and two coaches. By 1971, all passenger service for ATSF was transferred to Amtrak.

In 2012, a special Grand Canyon Limited excursion train took part in a five-day journey to the canyon for the State of Arizona’s Centennial celebration. ATSF Locomotive 3751 and Grand Canyon Steam locomotive 4960 pulled the train with the help of an Amtrak heritage unit for an exclusive train ride on the Grand Canyon Railway route.