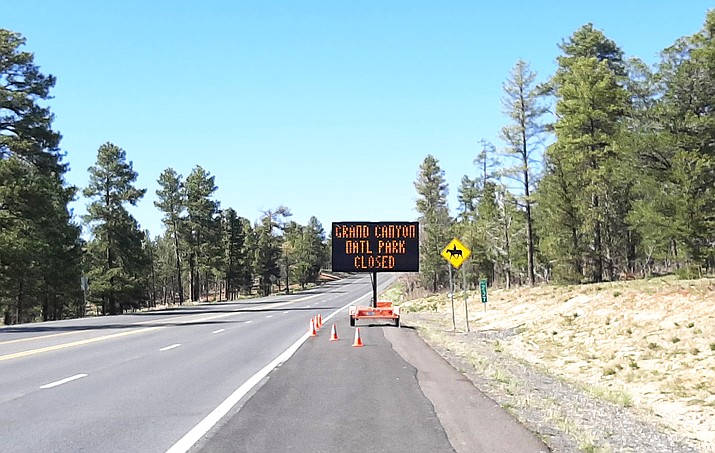 The NPS is working servicewide with federal, state, and local public health authorities to closely monitor the COVID-19 pandemic and using a phased approach to increase access on a park-by-park basis. (Abigail Kessler/WGCN)

GRAND CANYON, Ariz. — As spring turns to summer, quarantine conversation have shifted more to what re-opening might look like at the Grand Canyon.

Although Grand Canyon National Park (GCNP) has not yet announced an official reopening plan, the NPS task force has made reference to weighing multiple options.

During a May 6 community information session, the park stated that it has explored a variety of scenarios for reopening. These scenarios are based on county, park service and national recommendations. Under these recommendations and according to park statements, one thing is clear — a phased reopening is the most likely scenario.

Under White House guidelines, a series of conditions must be met in order to move to the next phase of reopening. These include a two week period with a downward trajectory of reported flu-like or Covid-19-like symptoms, a similarly downward trend in both cases and positive tests, and the ability of hospitals to test staff and care for all patients without the need for crisis care, according to whitehouse.gov.

During a May 6 town hall meeting of the Coconino County Board of Supervisors, the county stated it still has not seen a 14-day decline in the number of positive cases, which is the first trigger to relaxing these standards.

The county encouraged caution among residents, stating they are hoping to appeal to Arizona Gov. Doug Ducey for a reopening plan that isn't one size fits all.

Ducey and NPS officials have both stated that these recommendations are a large factor in their decision-making. A press release put out by the governor's office May 4 outlined Arizona's first steps to reopening, with retail businesses, barbershops, and cosmetologists resuming limited in-person operations May 8 and in-person dining to resume May 11.

On May 12, Ducey announced that the stay home order is being lifted May 15.

"Arizona continues to focus on protecting public health, supporting those in need and ensuring we’re taking the necessary steps to return stronger,” Ducey stated. “Our efforts to slow the spread of COVID-19 are working — and Arizonans are still encouraged to limit time away from home."

The National Park Service website has been updated with detailed plans for reopening a number of sites at other parks, however, Grand Canyon is not yet part of this group. More information on the park's reopening plan is expected to be released soon.