After serving the Williams community since 1950, the old Williams hospital comes down 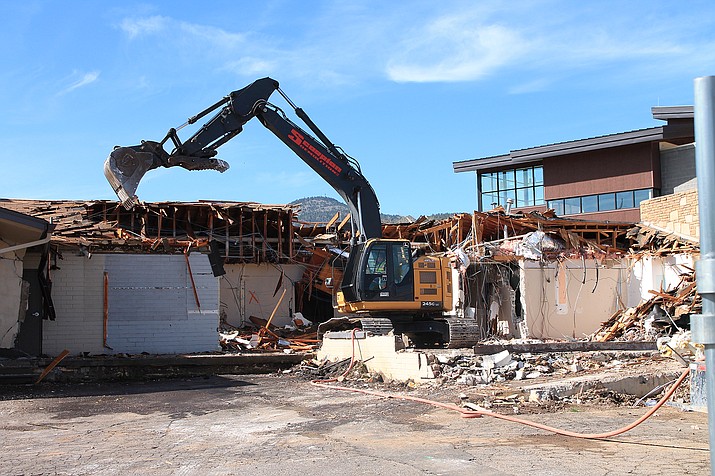 Construction workers tear down the old Williams hospital May 6 to make way for a parking lot for the new Williams Health Clinic. (Loretta McKenney/WGCN)

WILLIAMS, Ariz. — On May 6, a bit of Williams history came down when the old Williams hospital was demolished to make way for a parking lot at the newly built Williams Health Clinic.

It has almost been 70 years to the day, since the community of Williams held a dedication ceremony for their original hospital May 11, 1950. 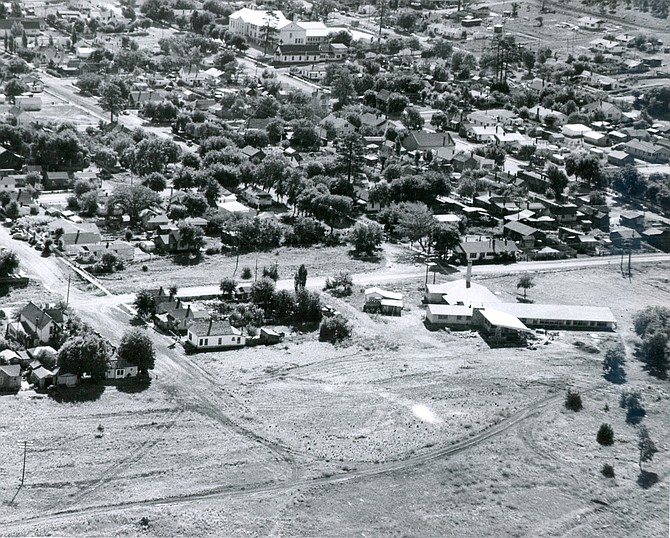 When the Williams Hospital (the large building, lower right) was built in 1950, most of the roads in Williams were still dirt. The facility was torn down May 6 to make way for a parking lot for the new Williams Health Clinic. (Photo/Williams Historical Photo Archives) 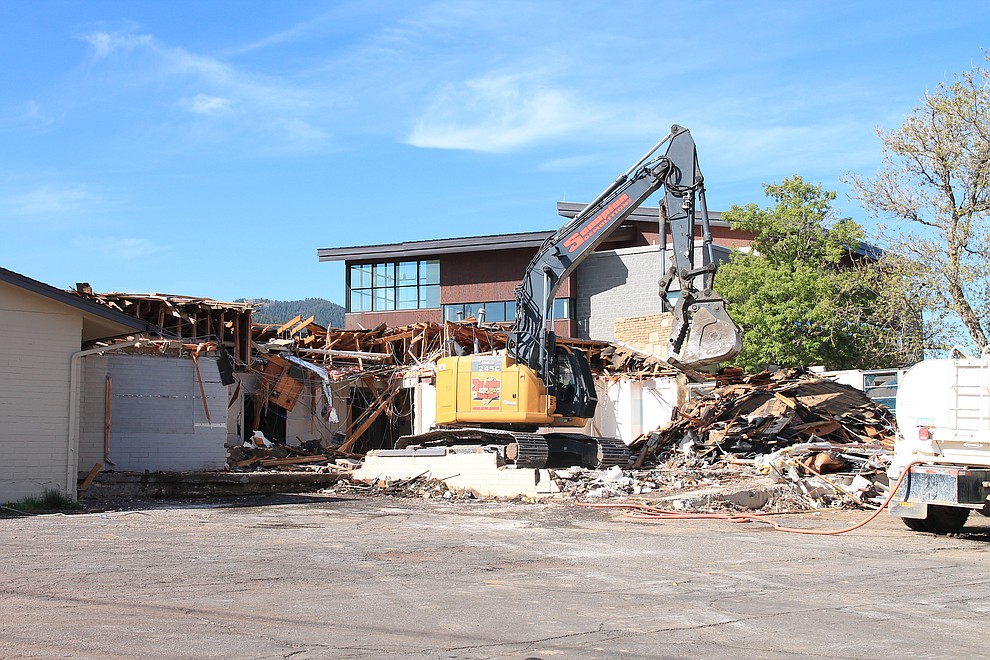 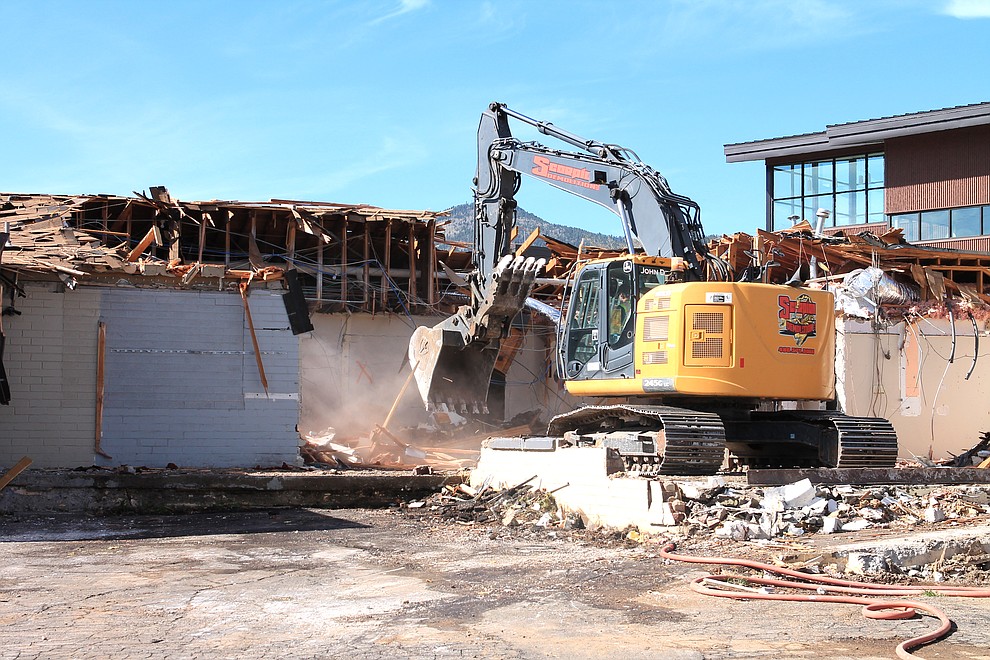 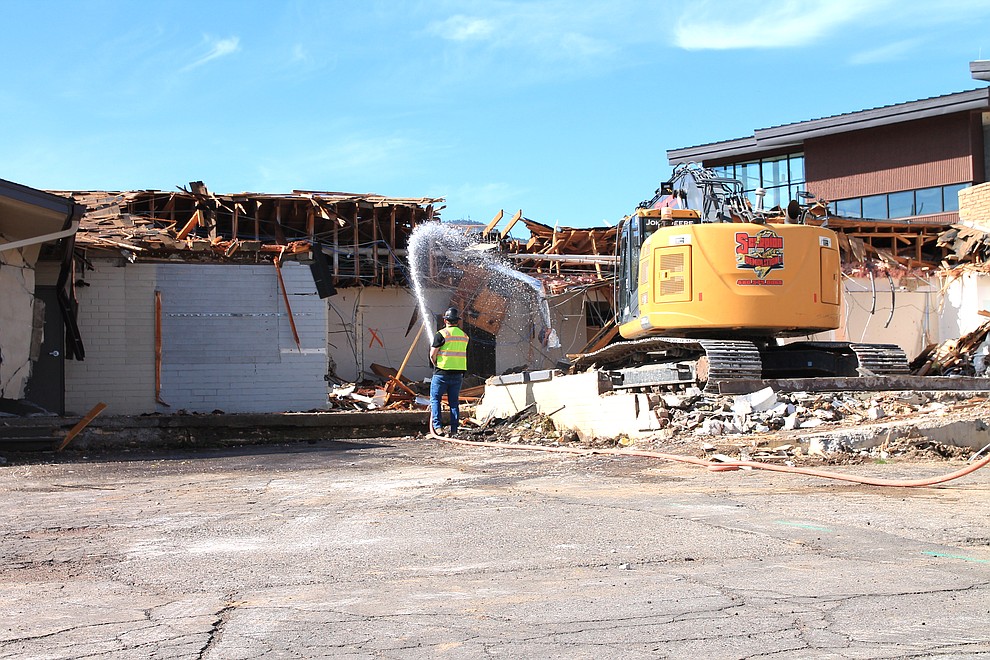 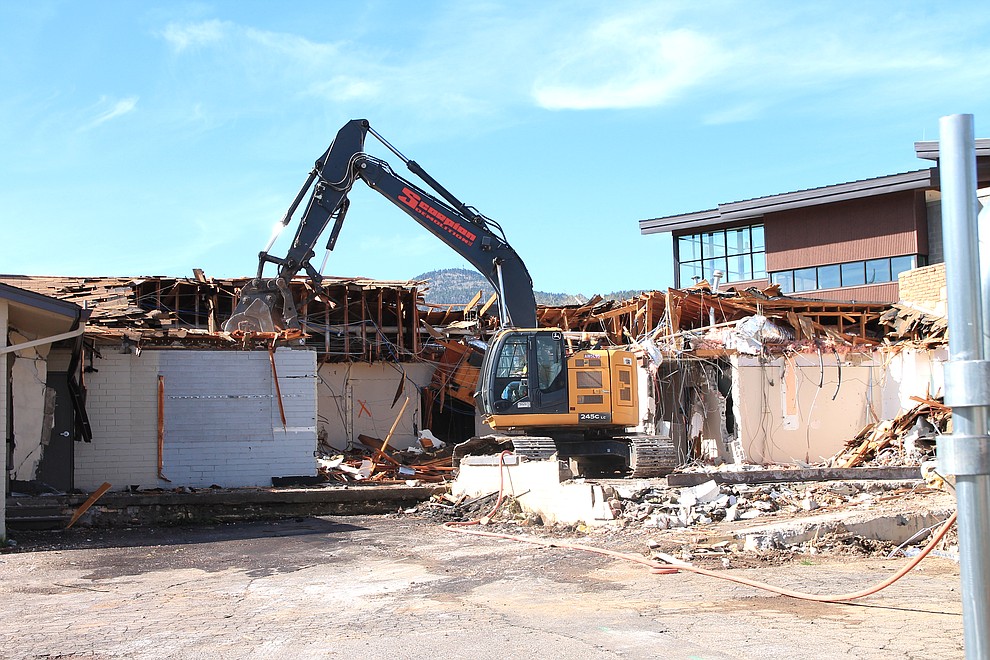 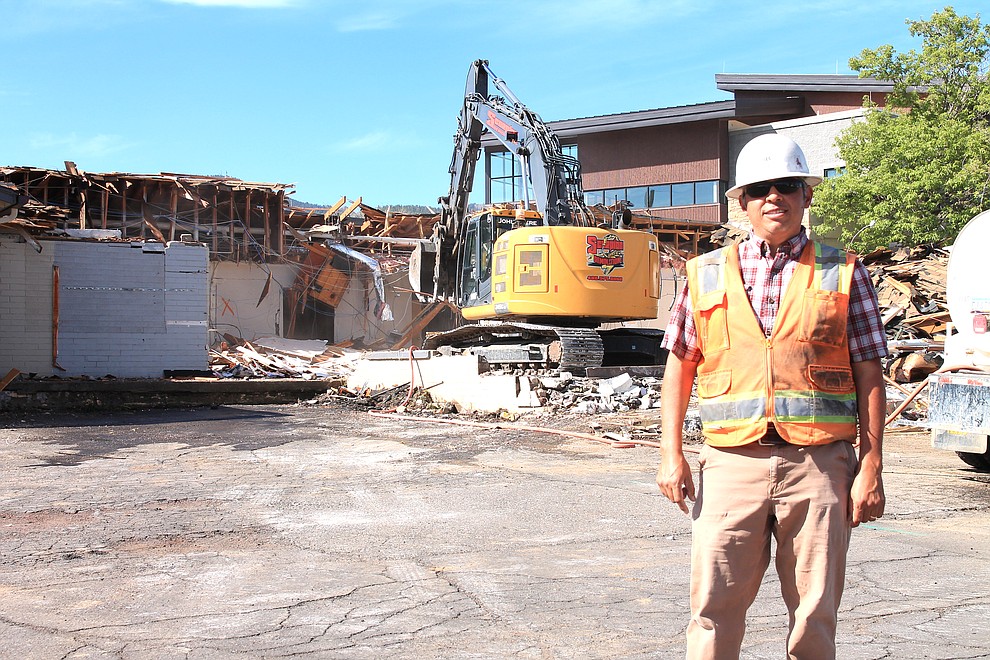 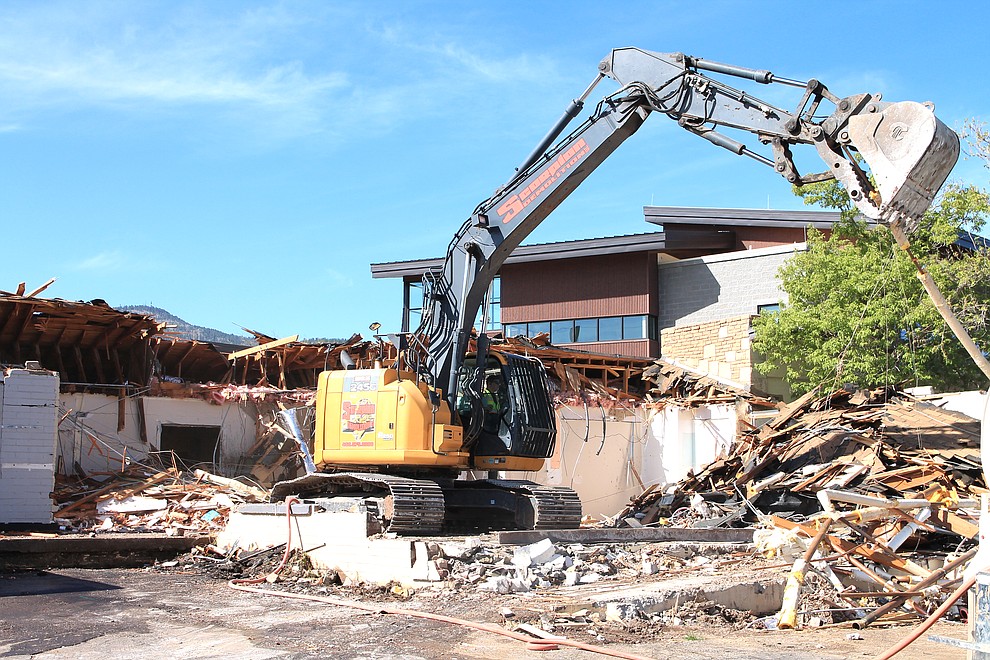 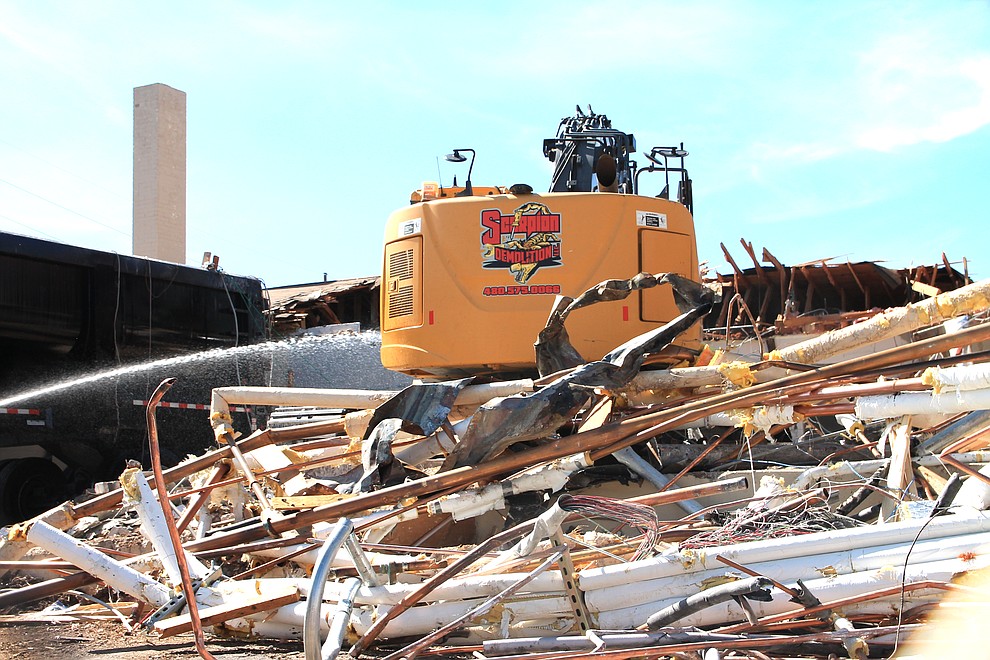 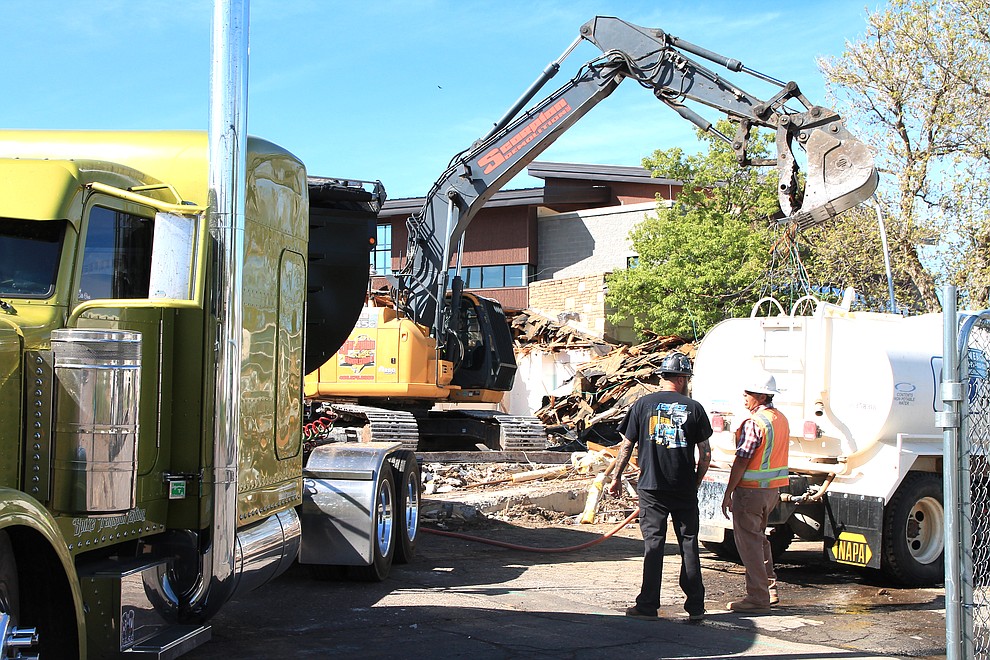 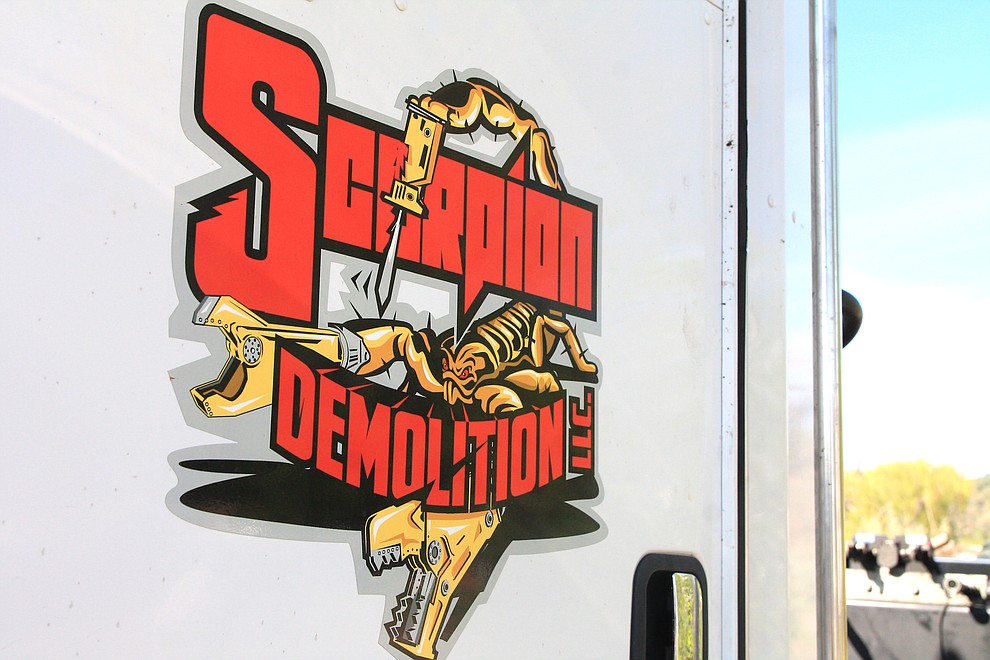 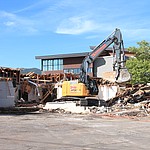 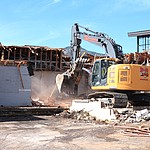 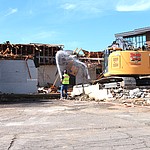 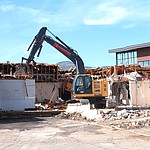 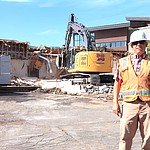 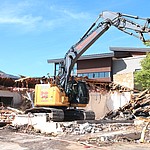 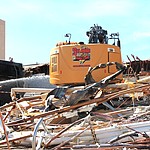 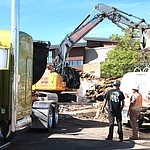 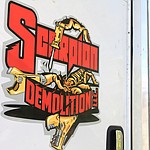 According to the archives at The Williams News, the hospital was a major development for the community that had been planned for nearly a decade. 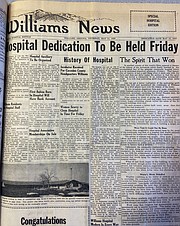 The May 11, 1950 edition of the Williams News announces the dedication of the new Williams Hospital. (WGCN)

Prior to that hospital, the community had been served by various privately run “hospitals.”

The Melick or Williams Hospital served Williams from 1896 to the 1930s. Melick ran the hospital in a building formerly operated as a clinic for employees at the Saginaw-Manistee mill. In 1929, extensive improvements were made at its location on the west side of Fifth Street between Bill Williams and Grant Avenues.

Around 1937, Dr. W. Gordon Garnett opened the Garnett Memorial Hospital in the Boyce Building on the northeast corner of Grant Avenue and Second Street. This privately-owned hospital was operated by Garnett until about 1940.

Shortly after, the hospital was taken over by Dr. F. W. Edel and became known as the Edel Hospital. It closed in 1942 leaving Williams without any hospital facilities.

A moving editorial by Williams News publisher Frank Wells explains the spirit of the community that went into the accomplishment. He talks about the town’s resiliency to catastrophe that included two devastating fires and the departure of the town’s largest industry, the Saginaw and Manistee Lumber Company — taking with it a sizable portion of the population.

“Undaunted, the town set about healing its grievous wound and in less than a decade had not only recovered from its low, but was moving determinedly ahead in building a larger and better town,” he said.

The May 11, 1950 edition of the Williams News announces the opening of the new hospital. (WGCN)

Wells attributes the progressive ideas of the community in 1943 with the idea that a hospital was necessary to safeguard the health and well-being of the residents. This Williams Hospital Association included J.C. Butler, Mrs. A.R. Montgomery, Charles M. Proctor, Do. O. Saunders, Carr Schwarz and Williams W. Stevenson.

Despite an insufficient population and lack of funds, the community began its planning. World War II put the plans on the backburner, but by 1948 the community had raised enough money to begin the project. Volunteers donated their labor and pushed through construction during one of the toughest winters on record 1948-49.

“Less hardy individuals might have postponed construction awaiting the mild days of spring,” Wells said. “Not so the builders of this hospital building. Bulldozing the streets open and shoveling the snow from the partly walled up rooms of the building, these workers preserved.” 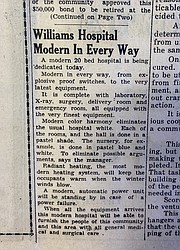 A 1950 edition of the Williams News describes the new hospital. (WGCN)

Money was lacking and contributions were sought throughout the community.

Around that time, $1,600 was distributed to the organization from the federal government’s post-war municipal development fund and the group chose a 4-block site on Sixth Street for the new hospital.

Work began April 6, 1948 on the hospital with a Phoenix architectural firm began drawing up plans.

The entire community began to take interest and voluntary donations began to roll in. On Aug. 15, 1948 over 80 volunteers poured the concrete foundation. The estimated cost of the foundation was $7,000 and it had been accomplished at less than $1,000.

Construction moved along rapidly with much of the labor and material being donated, and by early December the building was under a roof and contributions were nearly $16,000.

The community continued to hold benefits, dances and parties to raise money.

By March 1949 the flooring was complete, but lack of funds slowed the project. The building was complete in June, but efforts were still underway to secure more funds for hospital equipment.

The town council passed a resolution dedicating the hospital to four doctors who served the community in the past, these included P.A. Melick, A. G. Rounseville, C.D. Jeffries and J.W. Connor.

On May 11, 1950, a community dedication of the 20-bed hospital was held with over 200 people in attendance. Praise was given to the efforts put forth by the community. A letter in the Williams News also praised the work of Charlie Proctor for pushing through the project, and Wells for keeping the community updated on the needs and progress of the hospital through the newspaper.

As the new Williams Health Clinic opened, retired physician Cesareo Vasquez reflected on how the old hospital (and later a clinic) had evolved over the years. Vasquez had been a physician in Williams beginning in 1974, and worked at the old Williams clinic from 1990 to 2006.

“We have seen in newspapers and other media the decline of the numbers of rural and small hospitals across the country,” Vasquez said. “The Williams Hospital ceased to exist many years ago, but it has provided many services to our community and surrounding areas.”

Beginning as a hospital in the 1950s, the facility was fully staffed with nurses and surgeons. By the 1960s the hospital expanded to include operating rooms and a labor and delivery room.

In 1974, the Williams Hospital District purchased the hospital from the city of Williams and the Lutheran Home Society agreed to manage it.

“We used to take care of everything in the emergency room,” Vasquez said. “I knew just about all the highway patrol men and women, sheriff deputies and local police. They brought us everyone who needed help – major accidents, wounds, fractures, burns, etc...”

Vasquez said the hospital kept patients comfortable and offered obstetrics and surgeries onsite. He said Dr. Lorraine Biswanger was the general surgeon, and she was followed by Paul Lundstrom and Burg Faibisoff. Cleara Graham was the OR nurse.

He said Dr. Marvin Bates arrived in 1978 to open a private practice and was a big help to him.

But as Flagstaff Medical Center and the University of Northern Arizona began to expand in the 1980s, and medical technology and specialization developed, the Williams Health Center began to struggle to keep up.

By 1980, in-patient services disappeared and Flagstaff Medical Center took over the operation of the Williams facility as an emergency center. The hospital depended on local family practice physicians to respond to emergencies.

From 1986 to 1990, Samaritan Health System, now called Banner Health, assumed management of the hospital as an emergency care unit. The hospital district felt the clinic should also offer primary care.

In 1990, Vasquez moved his private practice to the health clinic and demand for services began to grow. Four years later, Samaritan Health hired two more physicians to help with the increasing need.

For the next 10 years, the health clinic found success as it provided primary care as well as urgent care, a laboratory and x-ray services.

In 2000, physical therapy services were added to the primary care operations.

In 2011, Banner Health stepped down as management of the clinic and after a search, North Country HealthCare was chosen as the new provider.

By the time Vasquez retired in 2006, the clinic had five physicians and three nurse practitioners.

“I felt that family practice in Williams was in safe hands,” he said. “The old Williams Hospital is gone, but the memories stay with us. I see around 10-12 of my “moms” and several of my babies, now almost 40 years old, who remind me of what a family doctor is.”