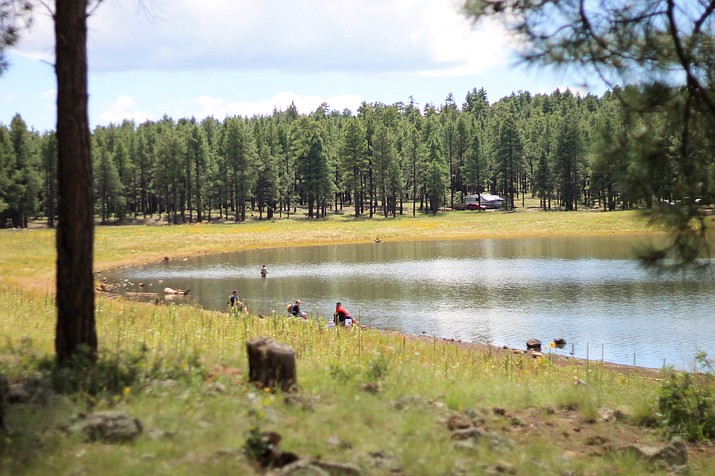 WILLIAMS, Ariz. — The city of Williams has moved a step closer to securing a loan for the Dogtown Reservoir waterline replacement project as a public comment period opens up.

Kaibab National Forest is seeking public comment for the project that will replace deteriorating water lines in order to ensure the city’s municipal watershed can provide a reliable and treatable source of water safe for human consumption. The project also includes adding Bearizona to the city’s sewer system.

The city has been working to secure a Water Infrastructure Finance Authority loan since 2018.

“The clean environmental assessment is what WIFA requires in order for us to acquire the financing,” said Williams City Manager Chase Waggoner.

If the Forest Service determines there is no significant effect on the environment, they will issue a Finding of No Significant Impact (FONSI) which will be presented to the WIFA board.

Waggoner said the loan will most likely close once a clean environmental assessment is determined by the USFS.

“If we get the go-ahead this summer, there will be about six weeks for the loan to physically close at the bank,” he said.

Waggoner said he is optimist that the city could put the project out for bid by the end of the summer.

“We may be able to break ground on this project by winter,” he said.

The Dogtown transmission line is more than 70 years old, with a history of inefficiencies, breaks and leakages. It runs through the Kaibab National Forest and carries 80 percent of the city’s water supply. The pipeline needs to be replaced to reduce water loss, according to the city.

City officials believe that 10-18 percent of the water produced in Williams is lost in the system, and engineers suspect much of that loss is from the antiquated Dogtown water line.

Currently the city uses Dogtown Wells No. 1 and No. 3, and Dogtown Reservoir as the primary source of water for the city. However, the well water and lake water are combined into one water line that carries the mixed water to the Cataract Pump Station, which is then pumped to the city’s water treatment plant for processing.

With the current single water line transporting two water types, the water treatment burden at the city’s treatment facilities is significant due to the unnecessary treatment of potable water.

The engineers have outlined a plan to replace the Dogtown water line with two lines, one that would come from the wells and one from the lake.

The two wells are the highest producing wells for the city, generating approximately 250 gallons a minute.

The Kaibab National Forest is proposing authorizations to allow the city to continue to maintain and operate the existing water line and to construct, operate and maintain new potable and raw water lines as well as a sewer line.

The new sewer line would be less than a mile long and would connect Bearizona to the city sewer system. Bearizona currently relies on a vault-and-haul system for disposal of its wastewater, which consists of an on-site tank that stores sewage until it is pumped out and hauled to a wastewater processing facility.

The existing water line, which consists of 1.9 miles of potable water line and 6.4 miles of raw water line, would remain in place for system backup. Water line construction would occur over a two-year period with most work anticipated to take place during the summers of 2020 and 2021.

The addition of new dual-system water line would alleviate the maintenance burden that the existing and aging water line adds and reduce the overall cost at the city’s water treatment plant by reducing the amount of water treated.

Members of the public can provide feedback on the Dogtown Water Line Project Draft Environmental Assessment during the 30-day comment period. Specific, written comments should be postmarked or sent by June 1.

Information can be found on the Kaibab National Forest website at www.fs.usda.gov/project/?project=56398.

Comments must be in writing and may be delivered electronically, by mail or by facsimile. Electronic comments, including attachments, may be emailed to comments-southwestern-kaibab@usda.gov. Include “Dogtown Water Pipeline Project” in the subject line. Submit comments by mail to: Supervisor’s Office, Kaibab National Forest, Attn: Sue Farley, Environmental Coordinator, 800 South 6th Street, Williams, AZ 86046.