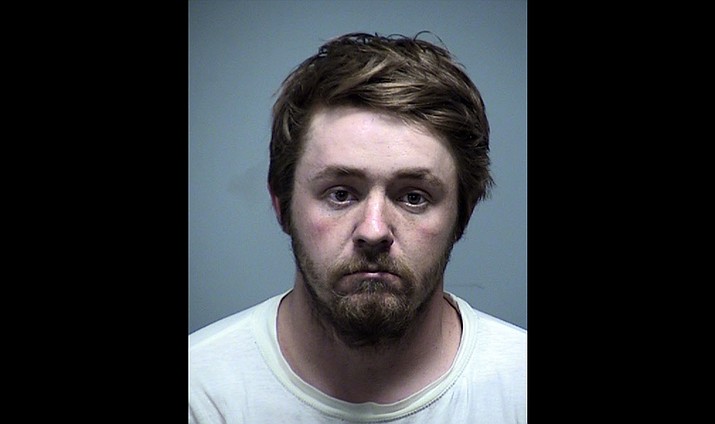 Austin Shakleford was arrested for Disorderly Conduct and Assault following an incident at a camp site near Perkinsville Road March 30. (Photo/YCSO)

A man was shot following a verbal altercation at a rural camp site on Perkinsville Road near Jerome March 30.

According to Yavapai County Sheriff’s Office, deputies were dispatched to a camp site near a bridge over the Verde River after 11:30 p.m. for a report of shots fired and an injured man.

Deputies discovered a 24-year-old victim had been shot in the arm and was being treated by personnel at the Jerome Fire Department for a non-life threatening wound to his left bicep.

The victim told deputies that he set up a camp site near a bridge over the Verde River off Perkinsville Road when around 10 p.m. a group arrived and set up a camp nearby.

The man said members of the group started a large fire while creating a lot of noise revving vehicles and dirt bikes, and shooting firearms. The victim approached the group and requested they stop shooting and reduce the noise level as he was trying to sleep.

The group was not receptive and verbally attacked the man. The man decided to leave and as he was packing his campsite he heard more shots being fired. The victim realized he had been struck by a round in his left arm. He believed it was intentional. The victim left the area and sought medical attention at the Jerome Fire Department.

Deputies proceeded to the camp site and found the group around 2 a.m. YCSO said the group was still disruptive and continued to rev trucks and dirt bikes. Five people were detained and questioned. Deputies spoke to witnesses who confirmed those detained were noisy and shooting firearms into the night.

After interviewing witnesses, deputies arrested 22-year-old Austin Shackleford of Prescott Valley for the shooting. YCSO said Shackleford initially denied shooting a firearm then later admitted he was firing across the river at a stump.

Deputies seized three firearms, including a 9mm handgun used by the suspect.

Shackleford was booked into the Camp Verde Detention Center on charges including Disorderly Conduct and Assault. Bond has not been set.