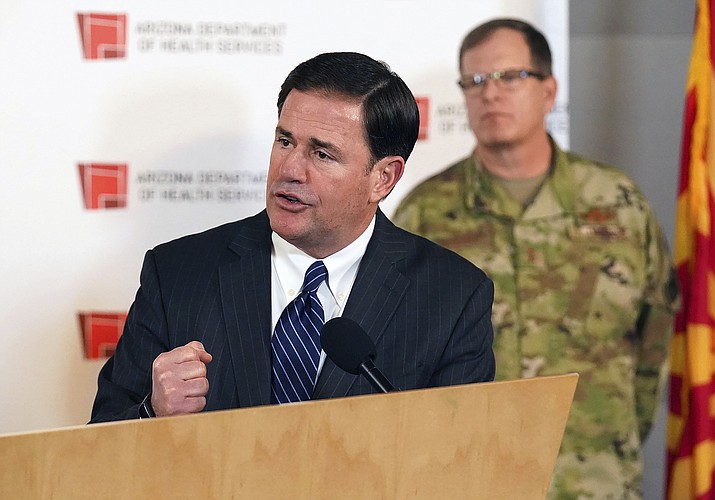 PHOENIX (AP) — Arizona officials said Monday that schools will remain closed for the rest of the academic year, but Gov. Doug Ducey faced mounting pressure from mayors to take more aggressive action to control the spread of the coronavirus.

The extended school closure, announced by Ducey and state schools chief Kathy Hoffman, means students will have to use online or alternative learning methods to close out the year.

Meanwhile, the mayors of nine cities — including the largest, Phoenix and Tucson — sent a letter imploring Ducey to order that people stay home.

"Arizona must not squander this opportunity to learn from the unfolding events in our sister states," the mayors wrote. They say a stay-at-home order would advance the social distancing recommendations from public health experts, which call for people to keep their distance from others.

Ducey has for weeks resisted making such a call. He prohibited mayors from forcing the closure of businesses on a lengthy list of enterprises deemed essential, from hospitals and grocery stores to golf courses and parks.

Ducey says he's following the advice of public health officials, and the spread of the virus in Arizona doesn't require stricter action at this time. The disease has not spread as much in Arizona as it has in states like New York or California, he has said.

"We want to do every escalation and elevation ... given the facts, given the science," Ducey said during a news conference last week, when he was asked why he hadn't issued a stay-at-home order.

Before Monday's extension, schools were previously scheduled to reopen on April 13. Ducey and Hoffman said the decision to keep them closed is a response to new federal guidance to maintain social distancing practices through at least the end of April. Health authorities recommend people avoid congregating in large groups and maintain at least six feet for separation from others others to help stop the spread of the coronavirus.

"Today's announcement is intended to give parents and educators as much certainty as possible so they can plan and make decisions," Ducey and Hoffman said in a statement released by the governor's office.

Legislation signed by the governor last week mandates online or other remote learning and allows teachers and support staff to work remotely or move to other tasks without losing pay.

The order applies to public and charter schools. Private schools must be remain closed through April 30 in accordance with the federal guidance, and administrators can decide what to do after that.

State health officials said there are now 1,157 known coronavirus cases and 20 deaths. Greenlee County, Arizona's smallest, reported its first case, making it subject to Ducey's orders for bars and gyms to close and restaurants to offer only takeout service in counties with known cases of COVID-19, the disease caused by the new coronavirus. The restrictions now apply statewide with cases reported in all 15 counties.

While he extended the school closures and has recommended people avoid gathering in groups of 10 or more, Ducey has for weeks resisted pressure to issue a stay-at-home order that would further restrict what businesses can operate and where people can go. He released a long list of businesses deemed essential and banned mayors from closing them, drawing a rebuke from some city leaders who thought the list was far too expansive.

Tucson's mayor, Regina Romero, last week ordered all businesses not on Ducey's list to close and recommended people stay home whenever possible. Her action is the most wide-reaching