What we know today: The coronavirus is impacting communities around the world 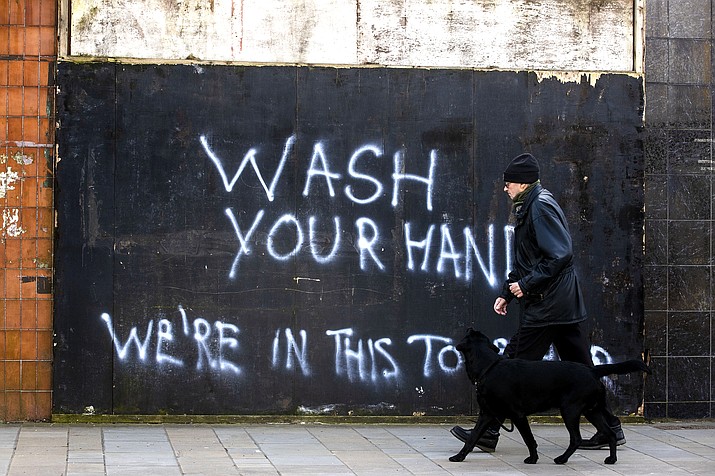 A man walking a dog past graffiti on the Lower Newtownards Road in Belfast, Northern Ireland, March 24. The government has restricted personal movements, asking the public to only leave your home if an essential worker, or for short exercise or collecting food. For some people the COVID-19 coronavirus causes mild or moderate symptoms, but for others it can cause severe illness. (Liam McBurney / PA via AP)

WASHINGTON — The head of the World Health Organization says the coronavirus outbreak is accelerating but insists “we can change the trajectory of this pandemic.” More than 1.5 billion people — one-fifth of the world’s population — were urged or ordered to stay home Monday to try to blunt the spread of coronavirus. The death toll from the pandemic has surpassed 16,000 people worldwide, and the virus has sickened more than 370,000.

Partisan divisions stalled efforts to pass a colossal aid package in Congress, and stocks fell again on Wall Street even after the Federal Reserve said it will lend to small and large businesses and local governments to help them through the crisis. The Dow Jones Industrial Average lost more than 580 points, or 3 percent.

In Italy, both new cases and deaths declined for a second consecutive day, providing a faint glimmer of hope, though it is too soon to say whether the crisis is leveling off.

A surge in infections has caused a critical shortage of medical supplies in many places. The hunt for ventilators and other critical items is consuming Europe and the U.S.

—More than 1.5 billion people have been urged ordered to stay home to try to blunt the spread of coronavirus.

—The coronavirus has arrived in the Gaza Strip and Syria, raising fears that the pandemic may now prey on some of the most vulnerable populations in the world.

—The International Olympic Committee announced it was considering a postponement and would make a final decision within four weeks. Major Olympic nations like Canada and Australia have added pressure by saying they will not send teams if the games are staged this year.

—Stocks fell about 3 percent on Wall Street as Congress hit another roadblock in talks to inject nearly $2 trillion into the economy.

—Those defying social distancing and lockdown restrictions from France to Florida to carry on as normal are coming under fire. One French minister was furious: “Some consider they’re little heroes when they break the rules. Well, no. You’re an imbecile, and especially a threat to yourself.”

—The virus was stirring calls for sanctions that have been levied against Venezuela and Iran to be eased. Those countries were urging the Trump administration to ease crippling economic sanctions they contend are contributing to the growing death toll caused by the coronavirus pandemic.

Grieving has become even more upsetting for families in the time of coronavirus. An untold number of burials around the globe now go forward with nothing more than a cleric, a funeral home employee and a single loved one. Others receive what would have once been called pauper’s funerals, buried in the clothes they died in.

What you need to know

For most people, the virus causes only mild or moderate symptoms, such as fever and cough. For some, especially older adults and people with existing health problems, it can cause more severe illness, including pneumonia. The vast majority of people recover.

One of the best ways to prevent spread of the virus is washing your hands with soap and water. The U.S. Centers for Disease Control and Prevention recommends first washing with warm or cold water and then lathering soap for 20 seconds to get it on the backs of hands, between fingers and under fingernails before rinsing off.

You should wash your phone, too.

$300 BILLION: In a series of sweeping steps, the Fed will lend to small and large businesses and local governments as well as extend its bond-buying programs. It’s all part of the Fed’s ongoing efforts to support the flow of credit through an economy ravaged by the viral outbreak.

Trump declares virus emergency; House passes aid package
Flattening the curve: What does it mean and how can you help?
National parks are free, but some oppose that amid virus outbreak
UN agency declares global emergency over virus from China
Arizona now seeing 'community spread' of new virus
Event Calendar