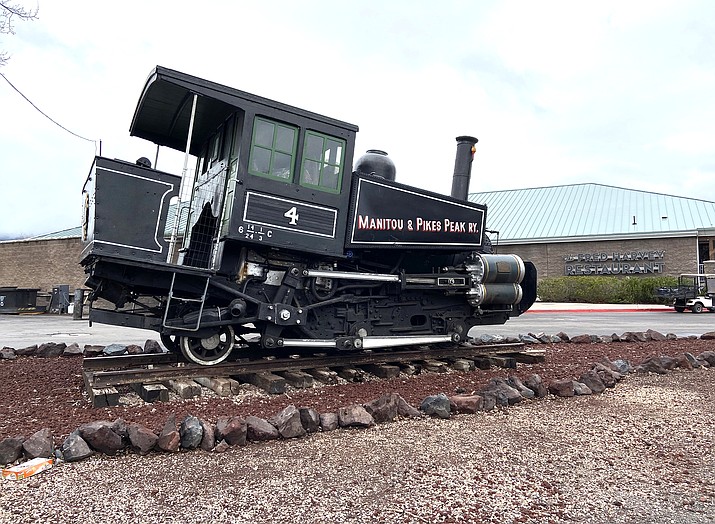 Steam Engine No. 4 from the Pikes Peak Cog Railway is on display at the Grand Canyon Railway. (Wendy Howell/WGCN)

WILLIAMS, Ariz. — A bit of steep mountain railroad history is on display at the Grand Canyon Railway.

Steam Engine No. 4 from the Pikes Peak Cog Railway is taking up temporary residence in Williams as the Colorado Springs-based operation goes under a $100 million renovation.

The cog railway had eight passenger trains that made the steep 8.9 mile-climb to bring tourists to the top of Pikes Peak. After nearly 126 years of operation, the Railway ceased operations because of aging infrastructure and equipment and began exploring renovation options. 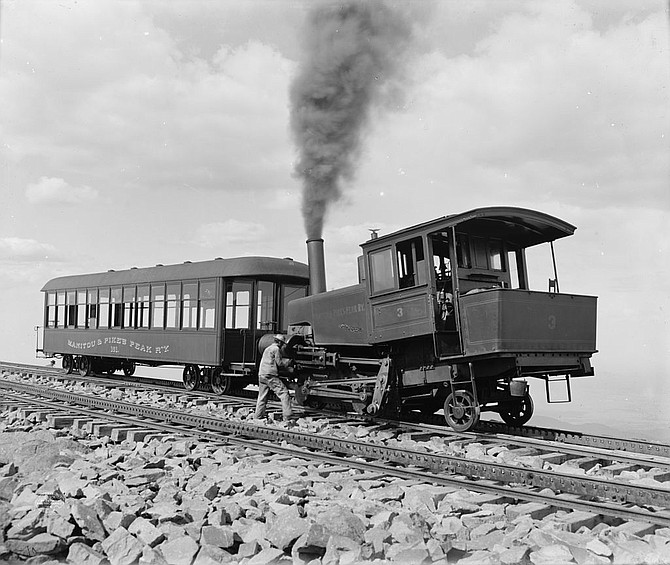 In the late 1880s, Zalmon Simmons, inventor and found of the Simmons Beautyrest Mattress Company, road to the summit of Pikes Peak on a mule. After a long two-day ride, Simmons came up with a plan to make the trip easier. In 189 the Manitou & Pike’s Peak Railway Company was founded and track construction began. The difficult endeavor claimed the lives of six workers as the blasted their way up the mountain.

On June 30, 1891 a specially built steam locomotive made the first 8.9-mile passenger ascent to the top of the 14,115 foot-summit of Pikes Peak carrying a church choir from Denver. The Manitou and Pikes Peak Railroad Company went on to build six steam engines for the railway.

The grade was so steep, the boilers were angled and a geared cog wheel and track system provided traction for the climb. The angle keeps the boiler more or less horizontal on the steeply graded track.

The two sets of cog wheels are staggered and offset from each other as they go into the rack rail, which sits in the center of the track. As the engine moves, the cogs work with the track system like a zipper.

Regular adhesion railroads are different, using weight and pressure against the rails to go along. Adhesion engines are designed for railroad grades of less than four percent, while cog railroads can handle grades up to 25 percent.

Steam Engine No. 4 is the only operational locomotive from the original six that were built by the Manitou and Pikes Peak Railroad Company. Until the closure for renovations, the locomotive was used for occasional steam runs up the mountain, as the railway switched to diesel-electrics, which is still the preferred method today.

According to the Gazette, the Broadmoor Pikes Peak Cog Railway, purchased three new engines, nine passenger cars and cog-rail and snow removal systems as part of the $100 million rehabilitation of the railway.

The engines are rack-and-pinion diesel locomotives and the rail cars will carry approximately 250 passengers.

The railway closed in 2017, with demolition of the railway began in spring 2019, with plans to rebuild the railway using the newest cog technology. The planned reopening is May 2021, which will take people from Manitou Springs to a $150 million new summit house at the top of Pikes Peak.