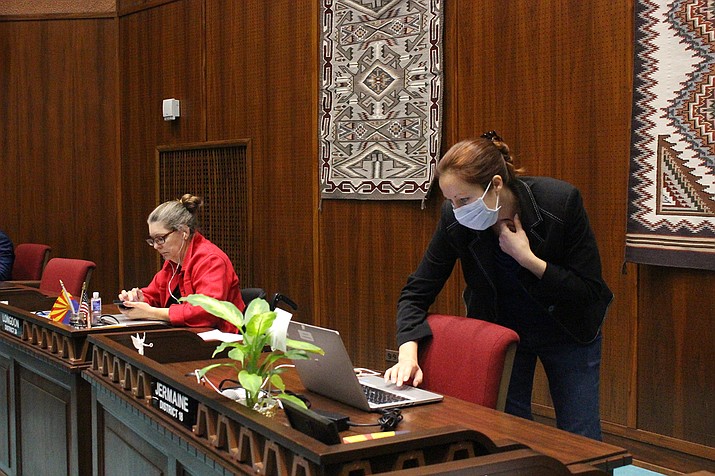 State Rep. Jennifer Jermaine, wearing a mask, looks at documents on her computer as fellow Democratic Rep. Jennifer Longdon, left, looks at her phone before the start of an unusual floor session at the Arizona House in Phoenix, on Thursday, March 19, 2020. The Legislature could work long into the night to enact a basic state budget and fixes for schools and workers before adjourning to allow the coronavirus crisis to ebb. (AP Photo/Bob Christie)

PHOENIX (AP) — Arizona lawmakers on March 19 were set to begin debating a basic state budget plan to tide government over until the health crisis caused by the coronavirus passes.

They also were eyeing major fixes for shuttered schools and workers who lose their jobs because of the virus.

A plan put together by Republicans who lead the House and Senate faced pushback from Democrats who are trying to get more relief for workers who suffer financial losses in addition to ensuring basic state operations can continue.

"We care about unemployment insurance, but we also care about TANF and SNAP and food banks," House Minority Leader Charlene Fernandez said, using acronyms for welfare payments and food stamps. "We've got to make sure that people are taken care of – we just can't cut and run."

House Speaker Rusty Bowers has introduced a basic budget plan that doesn't include Democratic demands and said he expects a long day filled with contentious debate.

"That's what I anticipate – long," Bowers said. "Long with lots of commentary."

The Senate, meanwhile, had been working to get minority Democrats on board in the absence of two Republicans who declined to return to work this week over concerns about being exposed to the virus. Both were in the Senate on Thursday, but Democratic Minority Leader Sen. David Bradley said he hopes to get some of his members' priorities into a final budget package.

Both the Senate and House hope to send a stripped-down budget package to Gov. Doug Ducey, possibly by the end of the day. They then hope to adjourn until the crisis passes.

Also on the agenda is a major proposal that would give schools that were ordered closed by Ducey to move to online or other alternative classes and free them from rules requiring testing and a minimum number of classroom days, among other provisions designed to give K-12 public schools flexibility.

The House unanimously approved the measure at midday. Democratic Rep. Kirsten Engel said she had concerns it contained no funding to help schools but said she supported the bill anyway.

"It seems like it does cover many emergency situations we're facing as a result of this unprecedented health crisis," Engel said.

The Senate has an identical measure on its agenda.

Both chambers have a second emergency measure that will ease rules for workers who are sick or out of a job.

Ducey said Thursday the economic fallout of the efforts to contain the spread of the coronavirus will have a big impact on a final budget enacted after lawmakers return. He said he'll work with members from both parties and with the federal government on a list of ways to help employers and people losing their jobs. He did not offer specific ideas.

"Our social safety net is going to be stretched, and we're going to be the one stretching it as far as we can to protect the most vulnerable and to help real people in this tough economic time," Ducey said.

Bowers has said the basic budget for the fiscal year that begins July 1 will keep government running during the crisis. It been stripped of new spending priorities — including full restoration of some previous education cuts — and the tax cuts many Republicans and Ducey were seeking. It spends $11.8 billion, about $500 million less than Ducey's January plan.

For most people, the coronavirus causes only mild or moderate symptoms, such as fever and cough. For some, especially older adults and people with existing health problems, it can cause more severe illness, including pneumonia. The vast majority of people recover from the virus.