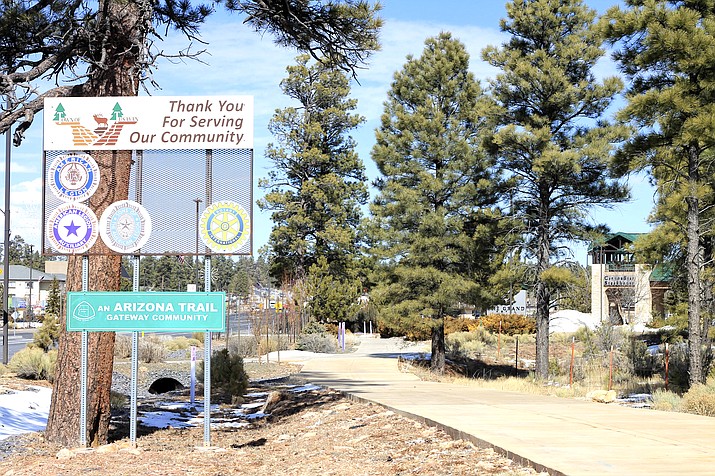 After reviewing the town's mid-year budget, Tusayan Town Council voted 5-0 to approve a loan of up to $2 million to invest in capital improvement projects. (Loretta McKenney/WGCN)

TUSAYAN, Ariz. — On March 11, Tusayan Town Council met to discuss a variety of issues related to town development, one of particular interest was precisely how to prioritize capital improvement projects (CIP), pending a $2 million dollar loan that was approved in mid-February to off-set budget restrictions imposed under state spending limits.

Currently, the state requires the town budget to exceed no more than $1.4 million, which prompted the council to move forward with the loan so that projects already being pursued would not be held up indefinitely. Despite Tusayan’s current $9 million in savings, the town voted against Home Rule in 2019, which would have allowed for greater expenditures.

Projects currently under consideration by the council include completion of the flood study required to proceed with the Ten X development project as well as other flood control projects, construction of a sports complex/wellness facility, crosswalk improvements and lighting on various trails and roads, affordable housing options for residents, improved internet services and funding for the Tusayan Fire Department, among others.

Earlier this year, the Town Hall sent out surveys to Tusayan residents in order to gain a better idea of what residents consider to be the highest priority regarding improvements — responses were anonymous. Out of 400 potential responses to the survey, only 25 were received by the council, around 5 percent, according to the town.

Tusayan Town Manager Cynthia Seelhammer stated that these results were “about what you could expect from this type of a survey.”

Seelhammer also said the survey was not intended as a scientific assessment, nor could the results be considered as reliable, as tracking responses would not be possible with this type of survey. The survey was “just a community outreach effort to try to make sure people suggest ideas” so that the council could have this information at hand to consider when moving ahead with capital improvement projects.

A review of the results stated that 60 percent of respondents selected housing options to buy or rent/ affordable housing and infrastructure to support housing as top priority, followed by 48 percent listing various aspects of the sports complex, which include options like a tennis court, climbing wall, etc.

Forty-four percent wanted improved internet options, 40 percent desired stronger support for the fire department, 16 percent expressed interest in a community center, which would provide the town with a meeting place to host classes and other activities as well as a library option. Sixteen percent also selected lighting improvements, protection for the wastewater treatment plant, improvement to trails, detention structures for flooding as areas of interest.

Lowest in priority were improvements to crosswalks, trailer court for employees who own RVs, low-cost or free shuttles year round and improvements to Long Jim Road speed bumps.

Other suggestions offered by residents were mentioned, such as various restaurant and retail ideas, however, these suggestions were considered to be outside of the current scope of spending limits.

Councilmembers then provided a verbal statement of their top priorities, in order to create an overview of potential projects and a budget to fulfill them, which would include consulting with engineers and other experts to come up with “current numbers” in regards to cost.

This overview would be, in essence, a new Capital Improvement Project draft, which would outline a path for attempting to complete various projects as soon as five years from now. The town has not updated its CIP since 2010, a point that was detailed by Seelhammer at the beginning of the meeting.

Seelhammer stated that she may have a recommendation for council members as soon as the next regular meeting, which would outline a list of projects that are the most ready-to-go as stated on the council’s priority lists. These “shovel ready” projects, such as trail improvements, may not be top priorities, however, they would be the most feasible to begin as soon as the loan is available.

More information is available at tusayan-az.gov/.