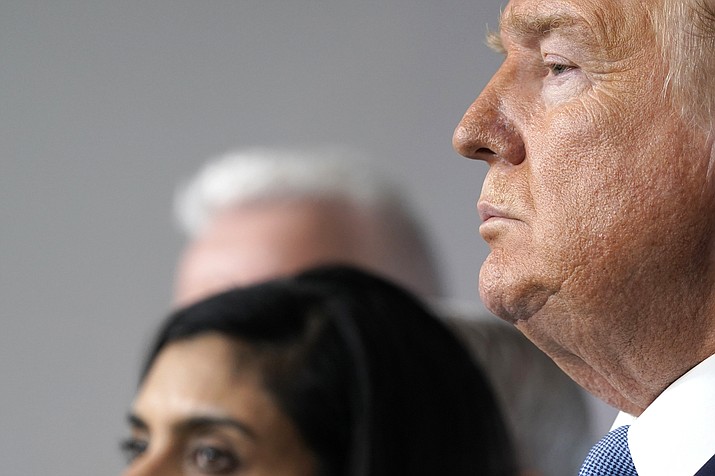 President Donald Trump March 13 declared the coronavirus pandemic a national emergency, freeing up money and resources to fight the outbreak, and then threw his support behind an aid package in Congress that is on track to provide direct relief to Americans.

From the Rose Garden, Trump said, “I am officially declaring a national emergency,” unleashing as much as $50 billion for state and local governments to respond to the crisis.

Trump also announced a range of executive actions, including a new public-private partnership to expand coronavirus testing capabilities with drive-through locations, as Washington tries to subdue the new virus whose spread is roiling markets, shuttering institutions and disrupting the lives of everyday Americans.

“We did what we said we were going to do: Put families first,” said Pelosi, flanked by Democratic lawmakers, including many freshmen. The House passed the bill after midnight on a bipartisan vote, 363-40. It now goes to the Senate.

Trump’s tweet of approval instilled fresh energy in the package, all but ensuring that wary Republicans would join with a robust vote.

The crush of late-day activity capped a tumultuous week in Washington as the fast-moving virus left ordinary Americans suddenly navigating self-quarantines, school closures and a changed way of life.

Additionally, Trump took a number of other actions to bolster energy markets, ease the financial burden for Americans with student loans and give medical professionals additional “flexibility” in treating patients during the public health crisis.

Central to the aid package from Congress, which builds on an emergency $8.3 billion measure approved last week, are the free testing, sick pay and family leave provisions.

Providing sick pay for workers is a crucial element of federal efforts to stop the rapid spread of the infection. Officials warn that the nation’s healthcare system could quickly become overwhelmed with gravely sick patients, as suddenly happened in Italy, one of the countries hardest hit by the virus.

The ability to ensure paychecks will keep flowing — for people self-quarantining or caring for others — can help assure Americans they will not fall into financial hardship. The legislation also offers three months of paid family and medical leave. Small and mid-sized employers will be reimbursed through tax credits.

Voting in the Senate is not yet set, with senators out of town for the weekend. But Senate Leader Mitch McConnell canceled a plan recess week and senators were scheduled to return Monday. He said he expects most senators will want to “act swiftly.”

Both Mnuchin and Pelosi, who said she did not speak directly to Trump during the negotiations, promised a third coronavirus package will follow soon, with more aggressive steps to boost the U.S. economy, which economists fear has already slipped into recession.

The financial markets closed on an upswing after one of the worst nosedives since the 1987 downturn.

The vast majority of people recover. According to the World Health Organization, people with mild illness recover in about two weeks, while those with more severe illness may take three to six weeks to be over it.

Dr. Anthony Fauci, infectious disease chief at the National Institutes of Health, said more tests would be available over the next week, but warned, “We still have a long way to go.”

This article has been edited for space