Rising home sale prices in Williams continued in 2019, but not everyone benefited 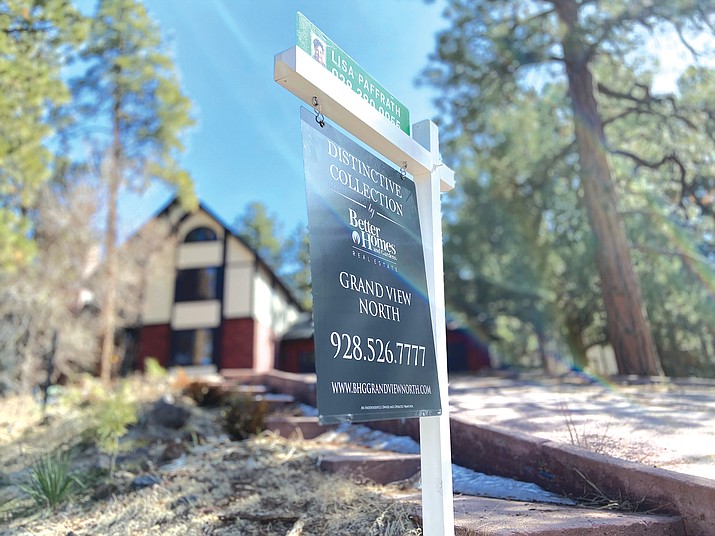 Home prices continued to rise in Williams in 2019, largely because of a low inventory of homes on the market. (Wendy Howell/WGCN)

WILLIAMS, Ariz. — Real Estate in northern Arizona continued to fly off the shelves in 2019, as Williams hit new highs in the cost of houses sold and building permits issued.

“We would have a home hit the market last year and get three offers right away.”

seeking to purchase homes in the area.

“It’s all California driven — second homes for some and relocating for others,” said Jackie Karlson of Better Homes and Gardens Real Estate.

Karlson said the average days on the market was 134 for the Williams area, but expects that to drop in 2020 because of the decrease in inventory.

“I think that will drop again this year because inventory is so low,” she said. “We have buyers waiting.”

Despite low unemployment rates and strong growth, interest rates dropped three times in 2019 mostly in response to concerns about President Donald Trump’s trade policies. Those low interest rates have fueled the real estate market. Mortgage rates as of March 5, 2020 dropped to 3.56 percent from 3.71 for a 30-year fixed-rate mortgage, according to Bankrate.

The median existing-home price for all housing types in January was $266,300, up 6.8 percent from January 2019 ($249,400), as prices increased in every region. January’s price increase marks 95 straight months of year-over-year gains, according to NAR Chief Economist Lawrence Yun in a news release.

“Mortgage rates have helped with affordability, but it is supply conditions that are driving price growth,” he said.

For residents wanting to stay in Williams, the demand for real estate from those outside the community is frustrating. The high cost of home buying and the increasing rent make it difficult for those who work and live in the community.

“VRBOs and Airbnbs have taken out the rentals and our market has now driven up our rents,” Karlson said.

The median household income in Williams is $47,857 according to U.S. Census data. With just 1,238 housing units and a poverty level of 25 percent, making rent can often be difficult.

The federal Department of Housing and Urban Development (HUD) defines an “affordable dwelling” as one that a household can obtain for 30 percent or less of its income.

For those looking to sell their homes and relocate to a more affordable area, the increase in home sale prices is seen as a positive.

“We would have a home hit the market last year and get three offers right away,” Karlson said.

Who is buying in Williams?

Karlson said most of her customers are coming to Williams looking for homes they can retire to now or in a few years.

“I think in 2019 we saw people who were planning their retirement, saying ‘ok, I’ve got 3-5 years that I have to stay in California, but we are here being proactive,’” she said. “They are looking at land or another home they can establish now and when they retired they can make the transition.”

Some of those customers purchase homes now and then are looking to rent them for a few years until they move to Williams permanently, Karlson said.

According to broker Nellie Mahan of Western Skies Realty, most of her customers are purchasing homes for personal use.

“In the past, a lot of the places were secondary homes,” she said. “Now they are saying ‘we just want out’ and are moving here full time.”

She said buyers like the small community and feel that the people are welcoming.

“We are also getting a lot of people who are driving through that are looking for land,” said Western Skies realtor Troy Troutman. “They want land for the future. They want a place they can park their RV until they can leave the big city.”

Karlson said buyers are looking at all types of options in Williams, but she has seen an uptick in interest in rural living.

“Well three or four years ago we didn’t see the off-grid living, we are seeing that more now,” Karlson said. “They want away from traffic and people. Everyone wants to live in the pines, have three to five acres and be able to have horses.”

Troutman said vacation rentals have boomed in the rural areas north of Williams.

“Valle has boomed - the Airbnbs up there,” he said. “I’ve sold several pieces of land up there, some to Europeans, an acre or five for the future. A lot of these are now off-grid Airbnbs on solar.”

Karlson attributes the increase in land purchases to the low inventory of houses. She said although land is selling, giving buyers more options, building construction costs are high.

“You’re looking at a 15-25 percent increase in building,” she said. “So starting with basic builder grade, you’re anywhere from $165 to $195 per square foot. With custom and upward it’s more like $350 depending on furnishings.”

According to Williams Chief Building Inspector Tim Pettit, in 2019 the city of Williams issued 196 building permits, 33 percent above the average of 148. Of those permits, 43 were for new residences, an increase from 40 in 2018.

In addition to new home construction, buyers are also interested in older historic homes in downtown Williams, while others are purchasing larger homes and land in areas just outside of Williams.

“We have people from Vegas and Phoenix who want that desirability of downtown, the style of the art deco 40s and 50s homes,” Karlson said. “What we’ve seen in Highland Meadows and north is again California driven where they are building these beautiful monster homes. You are looking at $550,000 to $950,000 depending on what you are wanting.”

What to do if you want to sell

For those interested in putting their house on the market, realtor Sierra Karlson recommends taking care of any deferred maintenance first.

“Having that all down and ready so you don’t have to make any repairs makes everything faster,” she said.

If a seller has money and wants to upgrade before selling, Karlson recommends tackling the kitchen or master bath.

“People look at kitchens and master bathrooms the most,” she said. “As for flooring, it’s usually best to give a flooring allowance. We have some people who love carpet and some who hate carpet. Just don’t touch it.”

Karlson said consulting with a realtor before making any changes is a good idea.

“We can walk through and give you these ideas,” she said. “Even if you aren’t sure you want to put it on the market.”

What to do if you want to stay

For those who already live and work in Williams, purchasing a home may not be out of the picture.

There are many first time home buyer programs and many residents can qualify for no-money down loans.

“Williams qualifies for the USDA Rural Development Loan, which is a no money down loan,” Karlson said. “We push the affordability of buying your own home. People still think they need 20 percent down for a loan and that isn’t true. We have a lot of programs for Williams.”