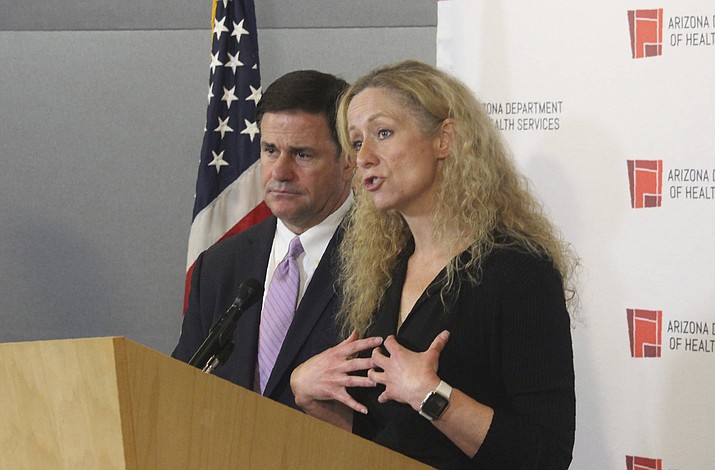 PHOENIX (AP) — Arizona Gov. Doug Ducey on Wednesday declared a public health emergency because of the risk of increased transmission of coronavirus in the state. But he fell short of ordering large events to be cancelled as the governor of Washington did in three counties.

Ducey said at an afternoon news conference that his emergency declaration and a separate executive order were being issued to ensure the state has the resources to fight the outbreak and the most vulnerable populations — mainly the elderly or those with serious health issues — are protected.

"While Arizona is not currently facing the number of case we've seen in some other states, we are anticipating additional positive cases and we're not taking any chances," Ducey said. "This is about public health and saving lives, especially those of our elderly and most vulnerable."

Arizona State University will move all classes online when students return from spring break on March 16, ASU spokeswoman Nikai Salcido said. University of Arizona President Robert Robbins announced late Wednesday that the start of post-spring break classes will be delayed for two days to March 18 and held online when possible. Northern Arizona University President Rita Cheng said in a series of tweets that the university remains open for now. The Flagstaff school has its spring break next week and may move to online courses when students return if needed.

The announcement came as state health officials reported three more diagnosed cases of the coronavirus in Arizona, raising the statewide total to nine patients, including five members of one Pinal County household.

The Maricopa County public health department said one of the three additional patients was a man in his 90s hospitalized in stable condition. Pinal County officials said the other two additional patients are people over 60 years old and are from the same household that includes three previously reported patients.

The patients "are recovering at home," Pinal County officials said in a statement.

Pima County also has one case. No virus-related deaths in Arizona have been reported.

The vast majority of people recover from the new virus. People with mild illness recover in about two weeks, while those with more severe illness may take longer to recover, according to the World Health Organization.

Federal officials announced Wednesday that the Centers for Disease Control and Prevention will provide $11.2 million to Arizona to support the state's efforts to respond to the virus.

The steps Ducey took Wednesday are designed to limit the spread of the disease and boost the state's response. They include waiving licencing requirements for health facilities that need to expand treatment options and giving health officials the ability to procure needed medical supplies.

The executive order is aimed at protecting those most at risk by requiring nursing homes to implement new rules for visitors. It also requires insurers to cover 100 percent of virus testing costs and for them to cover out-of-network costs of testing and telemedicine.

The state has a limited ability to do testing for the COVID-19 virus. But two big private labs in the state, Lab Corp and Sonora Quest, are now doing tests. The samples are taken at doctor's offices on a physician's order if a patient meets CDC guidelines.

"Everybody is looking at ramping up their capabilities," Koeneman said. He noted that his lab has no issues keeping up with influenza tests and once at full capacity should also have no problem doing needed coronavirus tests. But he expects delays at first.

"You might see a little bit of a lag up front. But it will probably be catching up as capacity increases," he said.

Ducey demurred to Christ when asked why he hadn't cancelled events as Washington Gov. Jay Inslee did Wednesday.

"Right now we are not at widespread community transmission," Christ said. "That would be one of the triggers that could potentially have us using that tool."