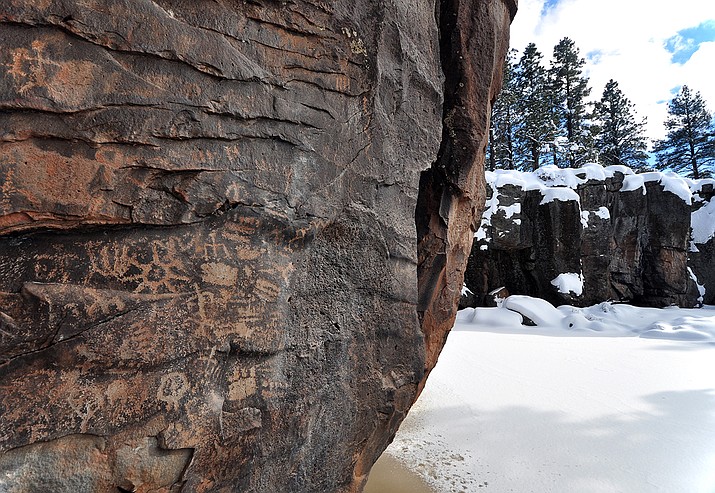 Keyhole Sink interpretive site is one of several offered excursions by the Kaibab National Forest as part of its Arizona Archaeology and Heritage Awareness Month. (Photo/U.S. Forest Service)

Besides the lecture series on Wednesdays and hiking opportunities on Saturdays, two Tuesdays will now feature evening talks sure to tickle the fancy of archaeology buffs. On both March 17 and 31, visiting Forest Service archaeologist Rochelle Rhone will offer “Williams Library Archaeology Month Super Tuesdays” from 6 to 7 p.m. at the Williams City Council Chambers, 113 South 1st St.

Rhone, an archaeologist from the Pike and San Isabel National Forests in Colorado, will entertain audience members on March 17 with tales of true grit and the dirty details of what it takes to launch a career in discovering, understanding and protecting the past.

On March 31, Rhone will serve as myth buster, presenting a program entitled “Believe It or Not,” demystifying common misconceptions about the field of archaeology and contrasting the real work to the film version portrayed by characters like Indiana Jones.

These “Super Tuesday” offerings, along with all Kaibab National Forest archaeology month tours and talks, are free and open to all members of the public who are interested in participating.

On Wednesday evenings throughout March, experts are presenting a series of lectures starting at 6 p.m. at the Sultana Theatre in Williams covering topics such as the history of sheep ranching in northern Arizona, Fred Harvey’s original farm-to-table legacy, and the role of the Forest Service in shaping Arizona and its lands.

On all four Saturdays in March, Kaibab National Forest archaeologists are leading fun and educational hikes to the Keyhole Sink petroglyph site near the Parks community starting at 2 p.m. The Keyhole Sink Trail offers a short, relatively flat hike to a scenic box canyon where prehistoric residents left their mark carved into the canyon’s gray volcanic walls.

Another special addition to the 2020 archaeology month offerings is the Stone to Steel Dam Trail hike, which is being held both March 14 and March 28. Guests should arrive at 9:30 a.m. at the Ash Fork Museum in Ash Fork. The trail is an easy, winding path between two historic dams. The first large steel dam in the nation was built in Ash Fork in the late 1890s by a railroad company. Less than a mile upstream is another dam dating from 1911, which was also constructed by the railroad but with stone blocks.

Archaeology month is intended to generate understanding of and support for the state’s archaeological heritage. Celebrations and events focus on promoting the preservation of archaeological resources and illustrating ways the public can help in protecting and appreciating them.