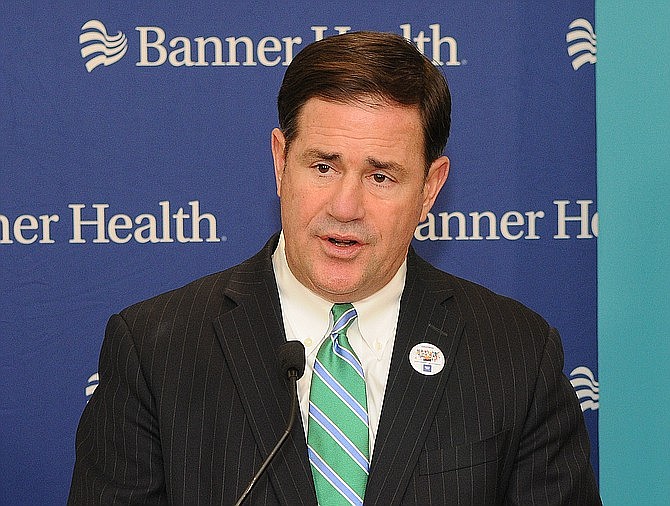 Gov. Doug Ducey answers questions Monday about COVID-19, its effects on the economy and how that could affect the state budget and his call for tax cuts. (Capitol Media Services photo by Howard Fischer)

PHOENIX -- Gov. Doug Ducey said Monday he's not worried that a stock market in disarray and fewer visitors will undermine his call for lawmakers to approve a new tax cut.

"Of course we'll be factoring in the situation of what's happening in the economy,'' the governor said when asked about plans, both his and by Republican legislators, to cut taxes. Those plans were unveiled before COVID-19 became a worldwide issue and patients in Arizona have become infected.

He said the economy has been "robust'' until now.

"This is, of course, affecting the economy,'' Ducey continued. "There's no doubt about it.''

But the governor said the state is in far better financial condition now than it has been in years. He also cited the $1 billion available in the state's "rainy day fund,'' about 8 percent of his proposed $12.3 billion spending plan for the coming year.

Ducey also said he is resisting various legislative proposals for tax cuts that would reduce revenues by $300 million or more, measures that already have been approved by Republican-dominated House and Senate committees.

Instead, he is pushing his own proposal -- the one he trotted out during the State of the State speech -- to eliminate all income taxes on pensions paid to retired military. And the price tag on that is only about $43 million a year.

"That's the budget we're going to pass,'' he said.

The governor's comments came during a staged event at Banner University Medical Center in Phoenix to urge Arizonans to respond to questions that start going out this week from the U.S. Census.

It even featured newborns and infants wearing T-shirts with a "Babies Count'' message to buttress Ducey's argument that children under age 5 are the most undercounted. And that, he said, threatens to lose Arizona needed state aid, saying a 1 percent short count loses Arizona $62 million a year in federal aid for the next decade.

Most of the questions for Ducey, however, were about the outbreak of the virus.

The governor brushed aside comments by President Trump who called some of the outbreak numbers and death rates "fake.''

"I'm going to be held accountable for the communication of what's happening in Arizona,'' he said.

"We're focused on what the facts are,'' Ducey continued. "And that's what we're communicating.''

Anyway, the governor suggested that Trump's comments may not matter as long as the administration is focused on the problem.

"I just spent 90 minutes (on the phone) with the vice president and the world's top medical experts,'' he said.

"I have their direct phone numbers,'' he said. "And they're all-in on this.''

And what of the economy?

"My concern's for public health,'' he said. "Stock markets go up and down.''

But a decline in the stock market would directly affect state tax revenues as investors not only have no capital gains to report but actually book their losses against other income.

Then there are concerns about how a wider virus outbreak might affect travel plans.

All this comes as Ducey and Republican legislative leaders are engaged in closed-door negotiations to come up with a spending and tax-cut plan. Still, the governor acknowledged the potential economic impact of the virus.

"We are factoring that in to our decision making, of course,'' he said. "We are going to put forward a responsible budget.''

Ducey said lawmakers -- the ones who have voted for deeper tax cuts -- know his position.

"I send a message every year when I release my budget,'' he said of his $12.3 billion spending plan and tax cut for military pensions. "That's the budget I want to pass.''

Still, he acknowledged that doesn't mean he will get his way.

"We'll have the appropriate to and fro and back and forth discussion and debate,'' he said. "And of course we'll be factoring in the situation of what's happening in the economy.''