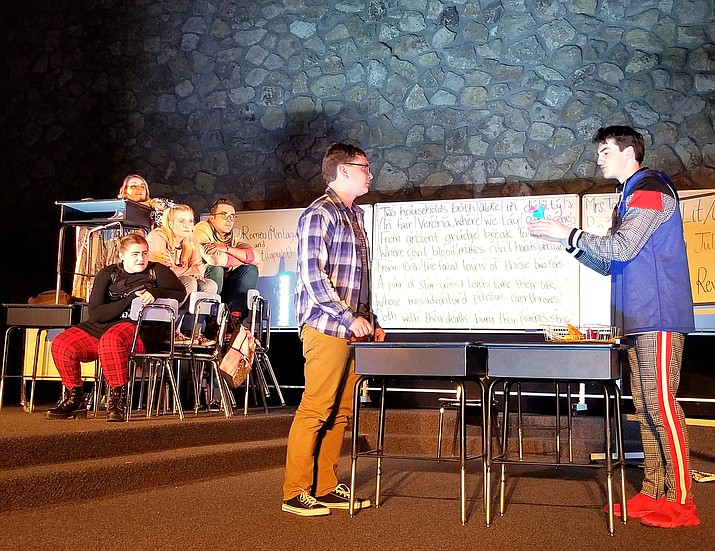 Romeo talks to Friar Laurence during a performance of Romeo + Juliet March 3 at the Shrine of the Ages. The performance was put on by the Utah Shakespeare Festival. (Lo Frisby/WGCN)

GRAND CANYON, Ariz. — For the fourth consecutive year, the Utah Shakespeare Festival returned to Grand Canyon’s Shrine of the Ages to deliver a two-part, all-ages educational experience utilizing the work of William Shakespeare. This year’s choice was the classic romantic tragedy Romeo + Juliet. However, this time, the look and feel of the play were quite unlike the familiar period piece commonly presented. 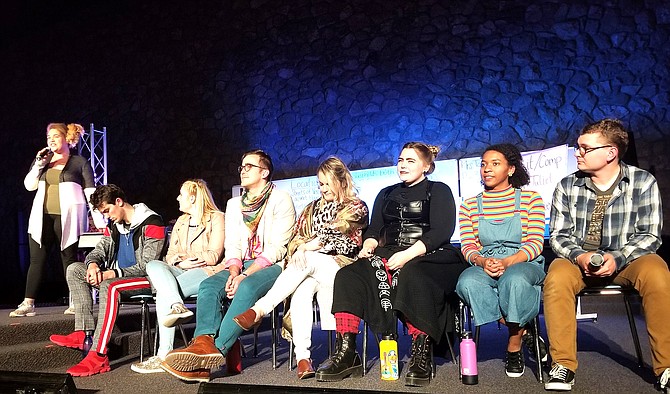 The cast of Romeo + Juliet hold a Q & A following the performance March 3 at the Shrine of the Ages in Grand Canyon Village. (Lo Frisby/WGCN)

For years, Director Jason Spelbring struggled to “see himself” among the characters in the play. Eventually, it was decided that various aspects of the story’s time period and character structure were distracting from the greater point: the emotions residing within each person.

In deciding to reestablish the setting in a modern-day high school classroom, Spelbring was able to envision the subject matter in a fresh new way. Rather than focusing on creating facsimiles of larger-than-life characters, the cast was free to inhabit the mental aspects of the story as high school students might.

For actor Bailey Savage (who is a woman), playing a male character (Lord Capulet) was more about connecting to the audience. In the play, “I am not an older man, I am a high school student. That changes the approach entirely.”

The play begins with students entering the classroom, whereupon things quickly evolve into a “through-the-looking-glass” type of experience; in preparing for the teacher to arrive, study hall quickly morphs into a collective-imagining of the classic tale playing out in real time, as students take on the personas of the characters in order to work through their current life situations. This deliberate way of presenting weighty subject matter is a particular aim of the tour, as the primary goal is education and outreach.

Actor Trey Plutnicki describes the approach as “specific and targeted” to the main audience, which consists mostly of middle and high school students. Plutnicki makes the point of being able to “directly engage with students and have the conversations we need to have” as a primary goal for the tour each year. This may seem like an intervention of sorts, and in some ways it is.

One of the areas of focus for the tour is to provide students with ideas and inspiration, through the performances and also the after-show discussion forums.

One of these ideas is that communication is essential to problem-solving. As part of preparing for such an important task, the cast took part in “QPR” training, which is a type of suicide-awareness program, which also covers domestic violence issues as well.

“We wanted to make sure we were equipped to handle those conversations, to have the language we needed in order to address those issues,” Savage said when asked about preparing for the audience Q & A.

For the audience, participation and engagement are encouraged. For students interested in theater or literature, there are workshops offered after the performance. Cultivating an interest in these art forms is also a goal of Friends of the Flagstaff Public Library, who provided funding for the event.

Friends of the Flagstaff Public Library is a non-profit organization that provides support to a variety of library services which tax dollars alone cannot cover.

Specifically, for this event, the library coordinated with Grand Canyon School, as well as the Grand Canyon Library, which is a branch of the Coconino County Library System.

Deputy Library Director William Ascarza of Flagstaff said the library hopes to continue to bring this program to the Grand Canyon community for years to come. He said it has become an annual event which has continued to grow every March since 2016, when it was first initiated by former outreach manager & Shakespeare enthusiast Judy Finney.

Ascarza said it’s important to provide the community with free, open to the public events, because it offers “an understanding of literature” beyond what can be read.

Typically, visitors are at the Grand Canyon for the breathtaking views, the hiking opportunities and its rich cultural history of indigenous people and settlers. However, as this performance as well as many other offerings throughout the year have proven, there is something for everyone at the Grand Canyon.

More information is available from the Utah Shakespeare Festival at bard.org/tour and the Friends of the Library at flagstaffpubliclibrary.org