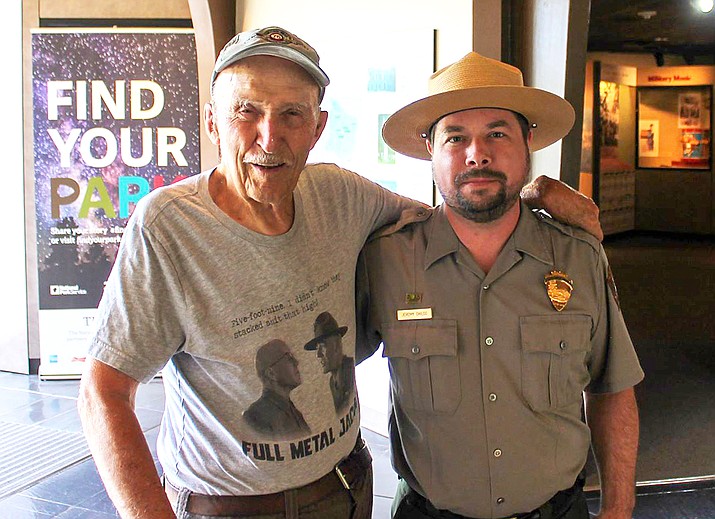 Childs said his academic focus of ‘unsilencing’ figures in history and providing them a voice has helped him think about history differently and has created a desire to dig deeper into stories that are often overlooked. Utilizing the park’s research library and archival records, Childs has focused his research on Grand Canyon and the National Park Service.

Last year, Childs developed and presented an evening program honoring the 150th anniversary of the Powell Expedition, who documented his travels on the Colorado River in 1869.

“Much of the expedition is accredited to John Powell, so I wanted to feature the stories of the nine crewmembers, not only during the 96-day trip, but before and after it too,” Childs said.

Childs is looking forward to kicking off a new evening program this summer and completing his master’s in October. The evening program will be a lantern-led walk through Pioneer Cemetery on the South Rim. The program provides a tour of the National Park Service via six former NPS park superintendents interred there.

Childs transferred to Grand Canyon in May 2017, from Stones River National Battlefield, Tennessee, where he previously worked with Edwin Bearss on various occasions.

“I know and respect his work, so to be suggested in his company is quite an honor,” Childs said.

Historian Frances Kennedy recently called to congratulate Jeremy for his winning application. Kennedy and her husband, the late NPS Director Roger Kennedy, endowed the fellowship in honor of Edwin Bearss, who served as NPS Chief Historian from 1981 to 1994. The Kennedys generous gift supports NPS employees’ graduate-level studies in American History or American Studies and is administered in partnership with the National Park Foundation.

Grand Canyon congratulated Childs for his accomplishment, and his commitment to strengthening and expanding capacities for professional history across the National Park Service.