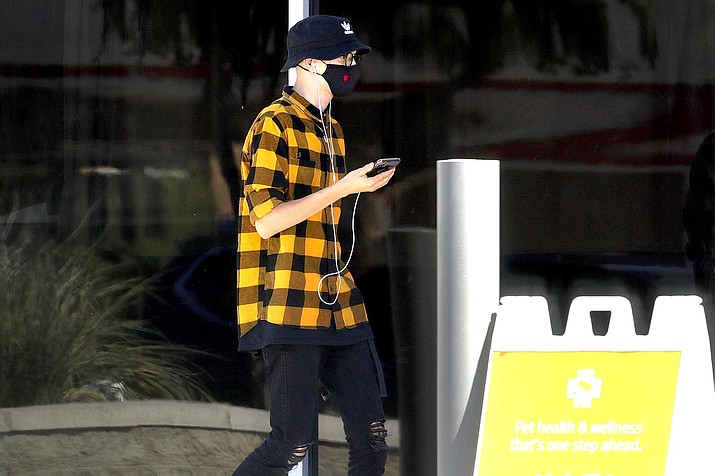 A customer wears a mask before entering a store, Wednesday, June 17, 2020, in Tempe, Ariz. A group of Arizona medical professionals is urging Republican Gov. Doug Ducey to take steps like requiring masks in public to slow a major increase in new coronavirus cases that has made the state a national hot spot. (AP Photo/Matt York)

The Republican governor, who entered his weekly virus news conference for the first time wearing a face mask but took it off to speak, said allowing cities to decide would work better than a statewide mandate.

The governor had as recently as last week resisted allowing cities to do more than the state allows to slow the virus spread, saying statewide directives avoid a patchwork of regulations. But he pointed to vastly different county rates of COVID-19 cases and alluded to pushback that some more conservative counties may have to mandate.

Mayors in Phoenix, Tucson and Flagstaff said they would move quickly to require masks. Mesa Mayor John Giles tweeted that he will issue a proclamation mandating masks in the city.

Pressure to mandate masks in public

Pressure has been mounting for Ducey to act amid the state's alarming rise in cases. Hundreds of Arizona medical professionals urged him to take steps like requiring face masks in public, top Democratic politicians urged him to act and the state's biggest newspaper, The Arizona Republic, also called for action.

Since Ducey allowed the state's stay-at-home and most business-closure orders to expire in mid-May, the second-term governor had taken no new steps to rein in activities like raging bar scenes and the lack of mask-wearing by many in public.

The rising numbers may have forced his hand. Arizona hospitals were treating a record number of coronavirus patients June 16 amid a surge of new cases. The state's Health Services Department reported a record number of emergency room visits for the virus as well.

Hospitals were treating 1,582 patients on June 16, an increase of more than 500 from two weeks earlier. Emergency room visits for patients with virus symptoms soared to nearly 1,100. On June 3, hospitals reported seeing 638 patients in emergency rooms.

Statewide June 16, hospitals were at 85 percent of capacity. Above the 80 percent rate where Ducey said they would have to halt elective surgeries to preserve space.

The governor also said he would direct the state to take action against "bad actor" businesses that don't follow guidelines from the U.S. Centers for Disease Control and Prevention and state for social distancing and other measures. The action is aimed at businesses like bars that have allowed large gatherings with few precautions.

And he said he was calling up 300 members of the National Guard to help counties that have struggled with contact tracing for large numbers of new cases. Tracing the contacts of infected people to ensure they're not spreading the virus is a key action needed to slow the virus' spread.

The moves came after more than 700 health providers sent Ducey the letter earlier this week urging him to require that people wear masks in public spaces.

Among them was Dr. Natasha Bhuyan of Phoenix. The family medicine doctor said marketing campaigns and tweets from the governor's office urging the use of masks aren't going to cut it.

"We've been educating the public this entire time, and clearly it hasn't been effective," Bhuyan said. "The accurate scientific information is just not reaching people. It's a public health tenet: When you make things mandatory, you see results."

She said she believes if immediate action isn't taken, Arizona could see hospital ICUs and ventilators reach capacity as early as July.

Ducey has suggested but declined to mandate masks. He posted on Twitter and Facebook June 17 saying, "Protect yourself. Protect others. Help contain the spread of #COVID19. Wear a mask. #MaskUpAZ."

During a news briefing last week where he pushed back on questions about a mask mandate, the governor insisted that the state's hospitals, while filling up, had the capacity to treat any expected surge.